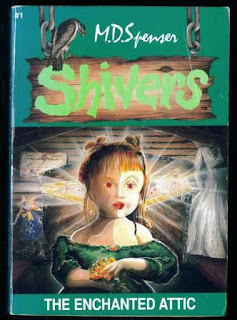 I started this book expecting to find a crappy book with a crappy storyline. I wasn't far off. The storyline was actually surprisingly good, for a children's horror book.

The story opens with our 11-year-old protagonist, Nicole, laying in her bed with the covers pulled up to her nose. She loves familiarity and mundane repetition in everyday life, prefers isolation and reading to physically doing things, and might be one of the most annoying protagonists in any book ever. Her family just moved to Massachusetts due to her father's new job, which she makes sure to remind the reader about by complaining every half a page. Her sister, Casey, is only slightly better than the main character. She's the adventurous type, running around looking for mud and spiders and mud-spiders because what 7-year-old wouldn't. Her other hobbies include annoying her older sister and then getting her in trouble when she snaps.

So Nicole, after several pages of character-developing complaining, decides to go try to talk to her sister at midnight. But, surprise! She was asleep. After going back to her room, Nicole hears footsteps in the hall. She panics and, in the scariest part of the book, discovers it's Casey! After verbally abusing her younger sister a little bit, Nicole threatens Casey into silence by saying, "Cross my heart and hope to die, if you tell I'll make you cry." It seems that these two also have the mental maturity of four-year-olds. Instead of striking back with the good old "I'm rubber, you're glue" line, Casey decides to let it go and sleep with Nicole.


The next morning, after lots of complaining and clever comebacks, Nicole learns that her house was host to a number of interesting people from the Civil War, to which she responds that she likes to read about history, not live in it. Yes, that sentence does make less sense the more you think about it. Nicole and Casey strolled outside and Nicole let Casey wander off because she was too busy complaining about their stupid forest and her dad's stupid job and the stupid family he had to support and why couldn't she have just been put in a different stupid book. After she nearly lost her voice, she decided to explore the house. She came across a study filled with tons of huge bookcases and decides that it might not be such a bad place after all because it has exactly what she wanted. She pulled a book off the shelf, and low and behold, it was a secret passage! Nicole shows her only redeeming quality as a character when she decides not to go in the spooky tunnel alone, after hearing voices. She shows her great observational skills and intellect with her ingenious observation that "Mice don't talk".

Any redeeming value was instantly lost when she chooses to grab her sister for the job. As she searches for her, she comes across a family graveyard that's actually next to the house, because, like, people had those during the Civil War (Fun Fact: they didn't). She notices that all the family members died young. I smell a ghost story.

Nicole and Carrie head over and break into the back of the study because the front is locked or something, and on the way they do a spit handshake. Not only are they 4-year-olds, they're also Tom Sawyer. After the pair get to the end of the passage, they find themselves in a stone room with a bloody American Civil War flag. M.D. Spenser said that "Nicole could not count the stars in the darkness," because it would have taken 2 minutes to look up how many states there were during the Civil War and that would be, like, 20 pages of writing. The sisters then go up a staircase where they find a locked door.

Nicole, after almost having a heart attack because her mom calls her to lunch, goes to the kitchen with her sister. The next day, they go to school, and things become normal and the reader is spared Nicole's complaining. But not for long. She starts hearing spooky cello music, and then she becomes freaked out and distant because no one else hears it. After a few nights of crying herself to sleep in the fear corner while hugging Blankey, she starts to hear drums and then decides that hey, maybe she should do something about it. She finds a key in the desk in the study, along with a diary, and brings her sister into the attic where she makes Casey put the key in. What an amazing sister.

Inside the attic they find a bunch of dolls in a chest that they opened with a crowbar, and all of them are extremely lifelike. After lots of painful wedding and farming scenes with Barbie and Ken, they retire, thinking that it was all over.

Plot Twist: It's actually not. The cello, drums, and now a flute started playing much louder than before, and then there's this really tense moment of tense tension, but it was just Casey at the door. The one chance they had to be scary.

Casey reports that she heard the noise too, and that Nicole is not insane and that yes, she understands that Nicole wants to live in their previous house. Nicole decides to investigate. In the attic. Alone. It seems like whatever this character does, she does wrong. Inside the attic, in the only truly creepy part of the whole book, the dolls have repositioned themselves and had angry faces. Didn't see that coming, did you?

Nicole goes downstairs and figures hey, why don't I look at that old family diary that I discarded. So she finds out that Franklin Fowler, the son of the man who bought the house, claims that there was a curse on either the house or the family. Everybody died young. The next part is really confusing, with all his family dying except him because he's special for no reason, and his grandchildren die and everybody dies and then he goes to see a witch and she casts a spell that would let him not be so lonely, but of course the side effects were unpredictable.

So Nicole figures out that his family is a bunch of dolls. Then she runs up to the attic and sees a bunch of dolls, which I guess confirms her suspicions. Then, when checking out the dolls, she finds one that looks just like Casey. She runs outside but realizes that it was just a horrible coincidence and that the doll just happened to look exactly like Casey and there just happened to be a family member named Casey who died and I just happened to stumble upon the stupidest horror twist ever to exist. They go up to the attic to see their new pals, but are surprised to find that they're not doll-sized anymore, but human-sized. And no, it never explains how. So the dolls start attacking the kids for interrupting the dead's slumber and letting M. Night Shyamalan make movies after Signs. They figure out that their only weakness is light, which, other than oxygen, is pretty much the worst weakness you can have. They pull the curtains off and break the windows, letting the dolls stay statue-like forever.

Insight into the complex minds of the characters: "He had said the house was a "fixer-upper". To Nicole, that meant it was a broken-downer."

Beautiful imagery: "He reminded Nicole of a comedian she had seen on TV."

Overall, I want to change what I originally said. Weak storyline, weak characters, well-written, for a book for children at least. Not something that I would read again, or give to a middle-schooler, but not bad.