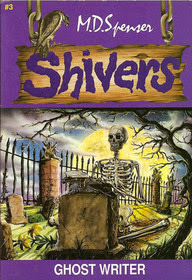 As the book opens, our protagonist Amber Elliston is mourning for the loss of the life that she loved due to having to move to Georgia. Amber is exactly like Nicole: loves to complain about switching houses due to her father taking a new job, not very social, loves to read, has a sibling that annoys her, and is haunted by the undead. So Amber is sitting in a car with her family, which is also the opening to A Ghastly Shade of Green, except without the heart-wrenching jokes. So far so good.

So Amber is indirectly telling the reader that her life is now over, and that she's never going to see her friends again and all the little things she misses about New York City. She's sitting next to her brother, David, who is fourteen and reading an adventure book about dragons and castles. I think M.D. Spencer is getting a fourteen-year-old mixed up with a ten-year-old. Not that I don't like dragons and castle, even now, but you'll see what I mean as I go along.

So Amber reveals that they moved because her dad got mugged and stopped feeling safe, because he never expected that such a thing could happen in New York. It's honestly too shocking for me to fully comprehend. But anyways, now he's working at a different newspaper. And there's another thing that Amber and Nicole have in common. I'm sensing a pattern.

Upon hearing the news that they will be moving, Amber bursts into tears and- get this- David locks himself in his room with a sign on the door that says "Parent Free Zone", and plays video games for a week straight. That doesn't quite sound like high school behavior to me, but maybe it's an east side thing, I don't know. But back to the car, all of a sudden this song goes on, complete with creepy piano music, that says, "Come to me, come to me, oh beautiful one. Come to me, or I will come to you". This song is constantly referenced as a strange yet beautiful love song, but personally I have never seen a song with creepier lyrics.

So then some weird stuff happens and she sees a creepy little girl face in the window. She screams, and her brother makes fun of her with the crushing burn of saying that maybe a velociraptor jumped out at her, and then proceeds to bite her arm like a velociraptor. It makes sense, since she's scared of Jurassic Park, but that still doesn't quite justify it. Then a little girl in a white dress with flowers in her hair appears in front of the car, making them swerve and nearly crash. Their car is crushed by a falling branch, which David mistakes for a dragon, but just then the sheriff shows up and drives them to their big, old, unfurnished house.

An accident was mentioned by the sheriff, but then the adults changed the subject. So they go to their new rooms, and Amber decides to look out the window. When she does, an old lady looks straight at her. And then she falls asleep even though she's twelve and afraid of Jurassic Park. The next morning, she tells her mom, who tells her that it wasn't a witch, but their estranged great aunt Hannah McAfee. She tells her that there used to be three McAfees: Helen, Hannah, and Harriet. The accident that was referred to earlier was Helen's death at the age of sixteen. She was found in a river, and the prime suspect was Hannah because Hannah found her, they were in love with the same boy, and they had been mad at each other. And the death was claimed accidental. Looks like a classic case of OJ Simpson. She did live in shame the rest of her life, though, so at least she had that to look forward to. Also, Harriet is their grandmother, but nobody cares because she's like the third Manning brother.

Just then, the sheriff comes by again, but this time with his daughter, Kelly, who's Amber's age. Kelly is the opposite of Amber, totally country born and raised, complete with her own four-wheeler motorcycle. The two decide to go up to Amber's room, where she trips over a loose board. Underneath they find a message on light blue paper. Before they read it, Amber asks Kelly about Helen. She says that she was a girl who wore white dresses and picked flowers, just like the girl in the road. Coincidence? Probably not, but the suspense is about finding out.

They read the beginning of the letter, and of course it's the creepy song that they heard on the radio that would get you maced in the eyes if you ever recited it to a person. But then they get distracted and they totally forget about it. Amber's mom asks the pair to go down to the mailbox and mail the bills, so they ride down on the four-wheeler and Amber, in the most intense and frightening part of the book, heart pounding, teeth chattering, body shivering, eyes closing, sleep falling, time wasting, accidentally mails the blue letter. They get back to the house, where Kelly is sent home and David and the dad gets back from picking up the now repaired car.

David, being the little rascal that he is, tells Amber that he was bitten by a shark when really, he joined a swim team called "The Sharks". Haha! Looks like we have a little Dennis the Menace. The dad chastises David for that searing burn he laid down on his sister. I don't know, maybe you had to be there. Right before he could use the old "Hey, your shoes are untied. Psyche!" line, Amber goes inside and decorates her room. Night comes, and she decides to check her email. To her surprise, she actually got one. The email is a picture of a young blonde girl. It's Helen. She turns her head and asks Amber to "help me help her." She understandingly freaks out and goes to bed.

The next morning, David is all chummy and wanting to explore. Usually, he just sits in his room and plays with his medieval action figure set. He reveals that the same ghostly stuff has been happening to him, and that he wants to check out the river where Helen died. Then Amber gets a light blue letter addressed to her that tells her go with her brother and "help me help her". So she goes, because ghosts are in the top 3 list of people to take advice from, right behind the sassy black sidekick in romantic comedies. They go to the river and Kelly shows up, so the three of them eavesdrop on a dirty old guy with a pit bull going up to the river and ripping up a light blue letter.

Team Junior Ghostbusters decides to split up and meet at three at their dad's office to see if they can find a helpful newspaper. The siblings get seen by the old man, but run away before anything can happen. Then they hear John Wayne Gacy's ringtone, most likely titled "Come to me", and hightail it home. The trio meet up at the newspaper office, and find that the newspaper with news of Helen's death has the same picture that was emailed to Amber. Then the receptionist said that Hannah committed the crime after the newspaper said that she was missing at the same time as her sister, which, to be fair, is pretty good evidence. It turns out that the love interest, Jim, played the guitar, and he and Helen made a sort of band. Hannah got really jealous, so she wrote him a song on the piano. They had a fight in front of the school, and Hannah said that she hated Helen so much that she could kill her. OK, so I could see why everyone blames her.

Of course, the song that Helen would have sung was "Come to Me My Beautiful One". I was pretty close. Kelly decides to sleep over, and in Amber's room, the song begins to play and Kelly freaks out, breaking into tears and saying she's scared. Amber and David sneak off without her and jump in the back of Hannah's truck as she leaves her house. She goes to the river and walks into a log cabin belonging to the old dude from earlier. They go up to the door and hear him arguing with Hannah, and the old dude drags the two kids in there after the dog gives them away.

They had all gotten letters, and then Mr. Grouchypants decides to blame the kids. David makes a run for it, but accidentally activates a record player and they listen to "Come to Me My Beautiful Victim One", and then Helen materializes and points out that the old dude is really Jim. Also he's a total dick now.

It is revealed that Jim really killed Helen "by accident", when he was shaking her shoulders trying to "calm her down" after the talent show. Helen tells Jim to set things right and stop being such a wuss, so he goes on a rampage and smashes everything. Jim and David do some good ol' fashion country wrastling after he tries to kill Hannah, while Amber screams and watches, wishing that she still had all those superheroes from New York. Then the sheriff shows up with Kelly. Right then. Of course.

Hannah's name is cleared and the sheriff actually believes them even though they're talking about an actual ghost. They all go home happily ever after, and Hannah becomes friends with the Ellistons. Oh, and Jim hates himself now. But that's part of the happy ending.

Insight into the Complex Minds of the Characters: (When talking about Kelly) "She didn't look like the friends Amber had had in New York. She didn't sound like them either. She bet Kelly had never even been to Central Park. She probably didn't like to read, and never even painted her fingernails pink."

Beautiful Imagery: "They heard a dog bark. It was not a friendly bark, like the yip-yip of the little poodle that used to live down the hall from them in New York."

Hip References: "She clicked on the E-mail program and heard the familiar sound of the modem hooking into the phone line. She entered her password, and watched the color picture of a mail box flash on. She was surprised when the flat computer voice said, "You've Got Mail."

Conclusion: Not bad. Maybe this series won't be terrible after all. Unfortunately, though, it was too good to make any good jokes about it, so hopefully the next one will be a little worse.
Posted by jonwg88 at 9:48 PM