M.D. Spenser has written some pretty bad books. Really bad books. But this book... this book is actually good. Like, impressively so (for a Shivers book). I'm convinced that the plot was at least partially copied from somewhere, but as I have no evidence I'll just have to give him a pat on the back. Now, the writing style is still not in my top ten, or thousand, lists, and most of the characters are aggravating and there is so much left unexplained but this really beat my expectations. I will let you interpret that as you will.

This book starts out as our protagonist, Martin NLN, complains about just how much he hates getting blamed for things he didn't do. Judging by the sheer amount of complaints, I would say a lot. His mom starts yelling at him for doing something he isn't even aware of yet, and actually begins to count off a list of things he did wrong, even though he just woke up. I can safely say that being in a Shivers book is pretty high up there. It turns out that someone, in the middle of the night, snuck into the kitchen, ate a jar of peanut butter, careful to get as much as possible on the counter and floor, and broke a plate.

So Martin is blamed because he likes peanut butter and apparently smashing plates. He denies this, of course, and is sent to his room. Then, he has a flashback to when he was younger and backed up his dad's car back before his parents got divorced, smashing his mom's bike. He convinced his nice little brother Farley to take the blame. Remember this, it's important later on. But honestly, I've read better backstories on board game instructions.

Martin loves reading history books. Gee, I seem to remember a certain stupid and obnoxious character that does the exact same thing. He loves to talk about Australia's history and how it was founded by convicts and how badly they were treated and I really do not care. This is just further proof that M.D. Spenser incorporates whatever nonfiction book he happens to be reading in to his novel. Anyway, Farley cleans up the mess so that their mom doesn't take away their trip to the beach the next day. Also, they have a trip to the beach the next day. Later, Martin has an internal conversation about how much he likes being the child of divorced parents. He says that normal children will believe (and be) whatever their parents tell them, but he has judgement because he hears a lot of different things from both parents. It's so deep I had trouble reading the words, they were so deeply etched in the page. Just... just so deep.

That night, Martin was trying to sleep when he realized something: someone outside of his family must have eaten the peanut butter. His mom hated peanut butter because apparently she isn't a human being, his brother is scared it will glue his tongue to his mouth and he would die (I'm serious). Now, that would make this book worth reading. Martin actually comes to the conclusion that someone snuck into their house, ate their peanut butter, smeared it around their kitchen, and broke a plate. Maybe he should start locking their doors to prevent more uninteresting conflicts.

The next morning, the NLN family puts their cat, Skunk (hahaha such ironic humor) outside and prepares for a great day at the beach. But then they find that their tires are slashed, so it's probably not going to happen. Their mom calls the sheriff of some unspecified city in Maine where they live. The sheriff comes over and they discover that the tires were slashed with Martin's Swiss army knife. The sheriff thinks that Martin's slashing of the tires is a result of puberty or something, becoming a teenager is a difficult time. I remember when I was younger, I had my tire-slashing, breaking-and-entering, peanut-butter-eating days myself. Boy, was I wild back then.
So the sheriff says that he can't help them, and their mom goes and locks herself in her room. Well, now I know who gets the second place "Worst parent" award. Right behind 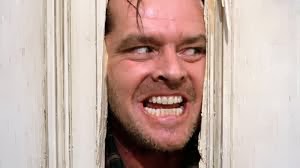 That night, Martin couldn't go to sleep, so he reads some more stories of tortured and undernourished Australian convicts. Wow, Martin, you are actually so dark and cool I can't even help myself. Eventually Farley comes in and they sleep together.

The next morning, nothing bad happened. Nothing. No messes of jarred food, broken silverware, or slashed tires. The boys played Store, which I was too old for at 12, and 7, but whatever. Night comes around, Martin tells us a little more about Australian convicts, telling me that he's darker and cooler than the inside of an arctic cave, and then goes to bed. The following morning, the kitchen is a mess. There's peanut butter and jelly smeared on the wall, and their table and chairs are totally smashed. But the worst part: the mom automatically blames him. That actually defies logic, and I think I would probably just leave the house at that point. There is a limit to human stupidity. Luckily, Farley points out a giant paw print, so that probably rules out Martin.


The mom faints, so the boys are alone with whatever monster is inside. They split up, of course, or else I would have to accuse them of using common sense. Martin thinks he hears the beast for about a chapter ending, but it's just his cat, which made him want to "drop kick that cat about a hundred yards into the end zone," which I'll admit made me laugh a little bit. Martin tries to call the sheriff, but... well, just think about the explanation. There is none.

That night, their mom let them sleep in their own beds, which is.. what, her tenth strike? Whatever. After reading about how the rich Australians hated the convicts' children, Martin falls asleep. Farley wakes up Martin with his screaming and yelling, "Martin!" He notices a big bruise on his side when he wakes up, and assumes that the evil creature gave it to him. Farley told Martin and Mom that he saw the beast walk into Martin's room, and hit it with a baseball bat, but was knocked aside. Their mom finally does something right and lets the kids sleep in her room.

Farley thought the spirit was a ghost. If only they had that girl from The Haunting House, she would know what to do but not feel like doing it! Martin decides to go to the bathroom in the middle of the night, and it turns out that he's the beast. It's better than the twist in most Shivers books. So Martin runs away in beast mode and cries in the middle of the forest. All of a sudden, he is captured by the sheriff and his deputies.

He wakes up in a clearing, where his mom is playing the organ. It turns out he has "Cholera Metamorphosis." Oh, I believe that's the form of anger so extreme that you turn into an ugly werewolf, Latin for "Terrible Plot Stuffer." In order to cure himself, he has to pick up a baseball bat and beat another monster beast to death. He does it, and it turns out it's just a mirror. I just realized how lazy this is. Well, it works, and it turns out that he'd been blaming himself for what wasn't his fault all along: his parents' divorce. His dad, who flew in just to help out, gets Martin to stop blaming himself, Martin remarks on how the rich Australians eventually forgave the convict-spawn, and everybody was happy.

Insight into the Complex Minds of Characters:
"I fell asleep dreaming sweet dreams of criminals who wouldn't tell anyone when the man chained next to them died, so they could eat his food as well as their own." Jesus Christ, Martin, can I please be you?

Beautiful Imagery:
When Martin has to fight the mirror: "Standing on the other side, also carrying a club, was the most monstrously ugly, hideously deformed beast I have ever seen." That is all that is used to describe it.

Did... Uh... Did You Even Go to School?:
Nothing, M.D. Spenser was actually pretty spot on with Australian immigration history. Pat on the back for him.

Conclusion:
It was pretty damn good. Cliché, yes, but the end was unexpected enough to be a good twist. Sure, there was a lot of unexplained things, such as whether the adults knew the whole time, how long they knew, and why there was an organ, but I have to give M.D. Spenser props for this. It was not bad.
Posted by jonwg88 at 10:22 PM