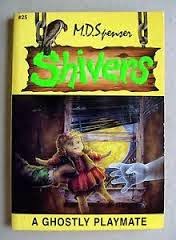 This is gonna be a really tough update, just because M.D Spenser does a really good job with this book. I mean, the narration is a little annoying, but it's for a reason. So I was sad about that, but then I remembered the back cover plot summary. It's beautiful.

"I DARE YOU TO COME OUT AND PLAY.
Do not take that dare, Virginia. It will be a double dare if she does. One, she moved with her family from the quiet countryside to noisy New York City. Two, because her new best friend was a ghost. Ghosts always win at hopscotch. Get out of here! No really, Virginia and her mom and dad should leave –– right away. Those ghostly games become weirder and weirder. Virginia doesn't want to play anymore. But her ghoul-friend won't stop. Tag, you're it! What does that ghost want? That's easy –– she wants a playmate forever and ever.
TIME OUT FOR TERROR!!!"

It will be a double dare if she does? Ghosts always win at hopscotch? Time out for terror? Who writes these? Does Paradise Press also function as a preschool? Or insane asylum? Or both?

So, first I will provide some background on the main character. She was extremely wealthy, and had a mother who tried very hard to fit into high society, so she tried to fit in as well. The whole first half of the book is littered with phrases like "enchanted to meet you" and "oh heavens, I'm getting ahead of myself." These are lines from the book, and tis quite obvious that M.D Spenser simply employed the most stereotypical portrayal of high society imaginable. I mean, not that I'd do that much better, it's just... so uncreative. For example, "I dabbed at my forehead with a handkerchief, but still I couldn't calm down." Oh, no, even after that?

So Virginia, the protagonist, lived in a huge mansion in Alabama with her neglectful parents and servants. When she was three, her parents had another child, but it ended up dying a few days later. Luckily, this book takes place years later, so it's not "too soon" to be making any jokes. Ever since the death, her parents have been cold and unfeeling toward not just Virginia but each other. It hit Virginia pretty hard too, since she was just dying for a little sister. Oh, and it also turned out that her parents were running on inheritance money, and it had nearly run out, so they moved to an apartment in New York City. If they wanted to live cheaper, I'm sure there were less expensive options than an apartment in New York, but OK.

So this is where our story begins. Virginia has to sleep in a dirty apartment in a lumpy bed. Oh, and by the way, her father is a failed inventor and her mother plays piano a lot, so... yeah. That's crucial later on. The next day, Virginia went to school and, as you can imagine, the other children did not take to her well. She should have just paid them to be her friends; oh wait, she's middle class now. At one point, she said that the people used "youse guys" instead of "you guys." When does this book take place? Nobody says that.

Back at home, the movers are lifting Virginia's mom's piano through their window. Is that a thing people do? Are windows that big? It also seems kind of dangerous... I mean, there could certainly be treble. Aaaaaaaaand there goes my viewers. But actually, the piano does almost fall, as the cable starts snapping and Virginia tackles her mother out of harm's way. It turns out that the piano had a safety cord just in case something like that happens, though, so it turned out OK.

Oh, and her dad calls her Caroline, after her dead sister. This reminds me way too much of Bill's family in It, by Steven King. I like Steven King. I'm not a huge fan of most of the movies made after his books, though, because so much of it is in the characters' heads. Just like Ender's Game, by Orson Scott Card: The book was phenomenal, but the movie was totally unsatisfying because the book was so focused on Ender's mental anguish that it would have been nearly impossible to make a good movie. Honestly, I don't care what people say about Orson Scott Card and his religious views, he is an amazing author. Ender's Game is probably one of my favorite books out there with The World According to Garp, by John Irving and The Passage, by Justin Cronin. Oh my god, The Passage was awesome. And I totally just lost track of what I was saying. So I'll skip forward a little bit.

At home, Virginia is looking in her mirror, thinking about how she has no friends, when she sees a little girl behind her. She's about to scream, but then the little girl tells her to be quiet and this wouldn't be a Shivers book if the characters actually did something productive. So Virginia, being lonely, tells the strange little girl everything. But then her mother's piano playing, which went on all day, stopped, so as Virginia went to make sure that her mom wasn't coming to check on her, the little girl vanished.

That night, the little girl appeared again. They had a little back-and-forth, and this is my rough interpretation:

Little Girl: So why do you use so many big words?
Virginia: That, my dear, is how we show we are people of quality.
LG: Doesn't that make you a douche?
V: No, a person of quality.
LG: Oh.
V: So where do you live?
LG: Oh, I inhabit the building. The whole building. By myself.
V: Well, you're lucky you don't live in this dump.
LG: But... but I... OK, whatever.

Then Virginia's mother comes yelling for her to pack her backpack, and L.G. has to hide in the closet. When Virginia checks, the little girl is nowhere to be found. Talk about a fair-weather friend. During Virginia's search of the closet, however, she finds the skeleton of a baby. First she thinks about just putting it back, or maybe throwing it away, but eventually settles on telling her parents, because she doesn't want to touch the city's filthy dumpsters. Her mom understandably freaks out and calls the police.

After the police haul off the skeleton, L.G. comes back and tells Virginia her origin story. Basically, she was born in an apartment bathroom to a very poor family. Eventually, times got too hard and her family left with her sister who was three years older than she was, and L.G. was left to fend for herself. *Ahem* Those are some really big plot point bells, M.D. Spenser. Anyway, Virginia isn't bright enough to put two and two together, so she doesn't understand anything for a while.

So a policeman, Sgt. Preston, comes by to tell them that nobody had any connection to, or cared for, the dead baby. And on that happy note, the little girl comes back. I just remembered that she had a name. It's Carly. I don't know how I've neglected to mention that, but there you go. Well, Carly visits, and then leaves with the promise of bringing playing cards for a little game. When she comes back, they start to play Go Fish, but the card passes through her hand and she reveals that Virginia would have to be dead to get the full experience. Well that's a hard bargain.

So, there were more subtle ways to handle that, but I approve of the straightforward approach. Virginia, of course, refuses, so Carly gives her some time to reconsider. Unfortunately, Virginia then stops sleeping and starts going crazy. After a month or two, she decides to get her life back together. She hires a life coach, starts jogging and making protein smoothies, even decides to take up model airplane building. And then, Carly strikes again.

This time, Carly looks like an anorexic mummy, with gaunt skin and stuff. It turns out that she can only touch stuff in that form, while she is incorporeal, but not skeleton-looking, in the other form. Carly asks Virginia if she's ever been kissed before, and she says no. Carly, being a ghost, could sympathize, and tries to kiss Virginia with soothing phrases like, "don't be frightened," and "just once." Well, I see where this is going. Fortunately, Virginia realizes that the kiss will most likely mean death, so she pushes Carly away. Carly realizes that she's not wanted, which was long overdue, and leaves.

...And then she comes back. After more of Virginia's giving up on life, Carly comes back and chases her around the house. Is Virginia's house full of Helen Kellers, because she screams the whole time and nobody cares. Granted, Virginia sucks, but come on. Virginia ends up running down stairs and straight into Sgt. Preston, who informs her that they will be having a funeral for the baby skeleton the next day. Virginia agrees to be there, even though it sounds like kind of a drag and none of her friends are gonna be there. She goes to the funeral, comes back, and meets Carly one last time. Turns out Carly was the baby. Who would have guessed?*

Well, a person turns into a ghost when there's nobody at their funeral, and goes around trying to get someone to care about them in the afterlife. Virginia sets Carly free. Then, Virginia's dad makes a device that saves babies who stop breathing, makes millions, and moves them back to Alabama. The dad and mom decide to have another baby, and the family starts showing affection again.

*everybody
Insight into the Complex Minds of Characters:
During Virginia's fit of depression: "She asked me a question once and I answered, 'False.'
The class laughed, because she had asked me to subtract two numbers, but I didn't care. False was still the right answer, in my mind. Nothing was true. Everything was false." Wow. That's deeper than the bottom of an undersea abyss.

Beautiful Imagery:
"'And who the . . . are you?' the lady screeched. Only she added an extra word in there, and it was the opposite of 'heaven.' Either that, or she was saying 'hello,' but I don't think so. My ears burned."

Hip References:
"They'll put you in an insane asylum, with people who yell at nothing and see things that aren't there and wash their hands when there is no water." Oh, I get it, it's a Shakespeare reference.

Conclusion:
This one was awesome. The narration, while a little over the top, was very clever in that the "high society-ness" in her speech decreases as the book progresses and her friendship with Carly strengthens. The scenes in which Virginia runs from Carly are not scary, exactly, but have a good amount of tension. M.D. Spenser does a really good job portraying the family dynamic without blatantly giving it away. Overall, I'd say this is my favorite book so far.
Posted by jonwg88 at 2:41 AM