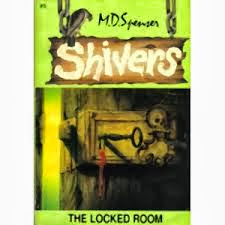 Protagonist: Brittany. 11 years old. Relative: younger brother Eric. Self-righteous prankster personality. They moved from a big city I'm pretty sure is New York, and are now in the middle of nowhere, California. You know the drill.

So her mom just married a dude named Bill, a nice guy whom both siblings despise for no sensible reason. Brittany has a locket of her mother and father, but she looks at it and her mom is replaced by some other woman with a red line across her throat. O.K, I know it seems pretty boring and standard, but as Shivers books go, this one is pretty gnarly. I've been waiting way too long to say that.

Then her brother throws her locket in the stewardess's trash bag and watches while Brittany fishes through it, which is going away from the lovable prankster side of the spectrum and floating dangerously towards just being a dick. He could seriously take a page from David's book. What a jokester.

So the siblings, their mother, and the stepfather, Bill Beard, drive to the old homestead and talk about how little stores there are near their future house. They get to the incredibly old house, where Bill gives them the lowdown on the history. His ancestor, William Beard, struck gold during the big Rush and bought a nice, quaint little quaint cabin, one of considerable quaintness. He brought his beautiful, gold-digger (see what I did there?) wife to share it with him, but then she stole the money and burned the house down, tearing the roof off of his heart. He survived, but they apparently never found the woman. The new house was the one in which they are going to be living.

The team goes inside and Bill blows a gasket when Eric tries to touch his keys. Looks like he needs to get his anger locked up (god, I am on fire today) now that there are children on the property. The Brittany and Eric duo go to their rooms to discover secret hideouts in the closets. Cool.

So Eric scares Brittany, and she goes to see her mom. All the rooms are hideously decorated, but that's the least of Brittany's problems when her mom's reflection is a pale, creepy dead woman that Mom conveniently doesn't notice. She ignores it, and they go down to the kitchen to carry out the most boring and pointless conversation I have ever read about. They talk about redecorating, and have a conversation about different shades of blue, and the effects of blue on the mind. Did you know that there's apparently a shade called "nearly white?" I didn't, but that's okay because I actually don't care.

Brittany volunteers to keep Billwatch (in case you didn't notice, that is a reference to the 1989 series Baywatch), to let her mom know when to start dinner. She startles him during his designated creepy grinning time, and he hisses at her. Really. Like a snake.  Like a Diamondbill snake. O.K, I'm sorry, I'll stop now.

Night falls. Our adventuring party goes to sleep. But, in the middle of the night, Brittany hears mournful violin music sobbing, and realizes that it's not Eric, but she sleeps in his bed anyway. The next day, the siblings go on a hike and Brittany explains all the terrifying occurrences of late. He doesn't believe her at first, but he shows that he's actually a pretty nice guy when he doesn't laugh or make fun. They eventually stumble upon a very quaint little cemetery, one that perfectly matches the "quaint" theme for the whole property. All six gravestones show the names of women with the last name "Beard," and they all died young. Including the wife from the house's origin story.

When they got back, their aunt and uncle, Bonnie and Ian, arrive. Bonnie sees a different face in Brittany's locket, so Brittany isn't crazy, just clueless, like every other Shivers protagonist. Just to prove my point, Brittany gets her brother to stay up late in her room that night. To hear the moaning. The ghastly, depressing moaning that doesn't have a source and only haunts her room. Pure genius.

Sherlock and Watson junior get freaked out when the sobbing begins and scream for their mommy, then Bill sneaks up and chastises them for being in a Shivers book and making it glaringly obvious through their actions. The next day, the crew decorates the house, when Eric falls right through the wall of Brittany's secret hideout. They decide to just let it go. For the first day. Then the exploring began.

The siblings find a secret room, with a ton of random possessions, plus some portraits with Bill standing next to a different woman in each one, each taken during a wedding, complete with a lock of hair, a scarf or rose, and the finger with the wedding ring. Whoops. That's one hell of a relationship status.

The kids ruin Mom's new painting, and she gets furious and refuses to listen to their logical claims of an immortal man who collects and kills wives. Also, I'm pretty sure that this was based off of a Twilight Zone episode.

Finally, Bill leaves, and the kids show Mom what a horrible man she married. She realizes that they now need to be more careful than ever not to damage Bill's house or car, since insurance is a bitch when you've got a social security number from the 1800's. Bill comes to kill them all, insulted that Mom betrayed him by snooping and forced him to attempt to absorb her youth. Poor guy.

All of a sudden, Uncle Ian shows up and saves them, with a little help from Bill's ghost wives.

But then, in the first twist ending ever...
The family goes safe and sound to the airport. When Brittany opens the locket for comfort, though, her father has been replaced by Bill.

Insight into the Complex Minds of Characters:
“'Blue’s my favorite color these days, Mom. I read in a magazine that blue is a great color for sleeping. It’s peaceful. The magazine said people who like blue are good listeners. Also, we’re creative.'” I'm not even joking, this conversation goes on for, like, four pages.

Beautiful Imagery:
"The faces I had just seen in the mirror were hideous and hard to identify, but something told me they were female."

Conclusion: A pretty darn bad book. I snuck in some good puns, but reading about boring Beverly left me feeling blue. Did you see that? I'm really sorry, but I honestly had to put that one there. It was awesome. Anyways, monotonous storyline and characters, but the evil stepfather really made Bev and Eric Bill'd a stable relationship. Thankfully, the last few pages were full of finger-licking (in case you didn't catch that, it was a reference to the severed fingers found in Bill's closet), Eric-of-your-seat terror. Please help me. Seriously, I think I'm developing a problem. So see ya next time, hopefully in my next pun-free update. I'll try to lock up my problem.

P.S. I made a rough schedule. I will write a new post every weekend during either Friday or Saturday night.
Posted by jonwg88 at 11:05 PM