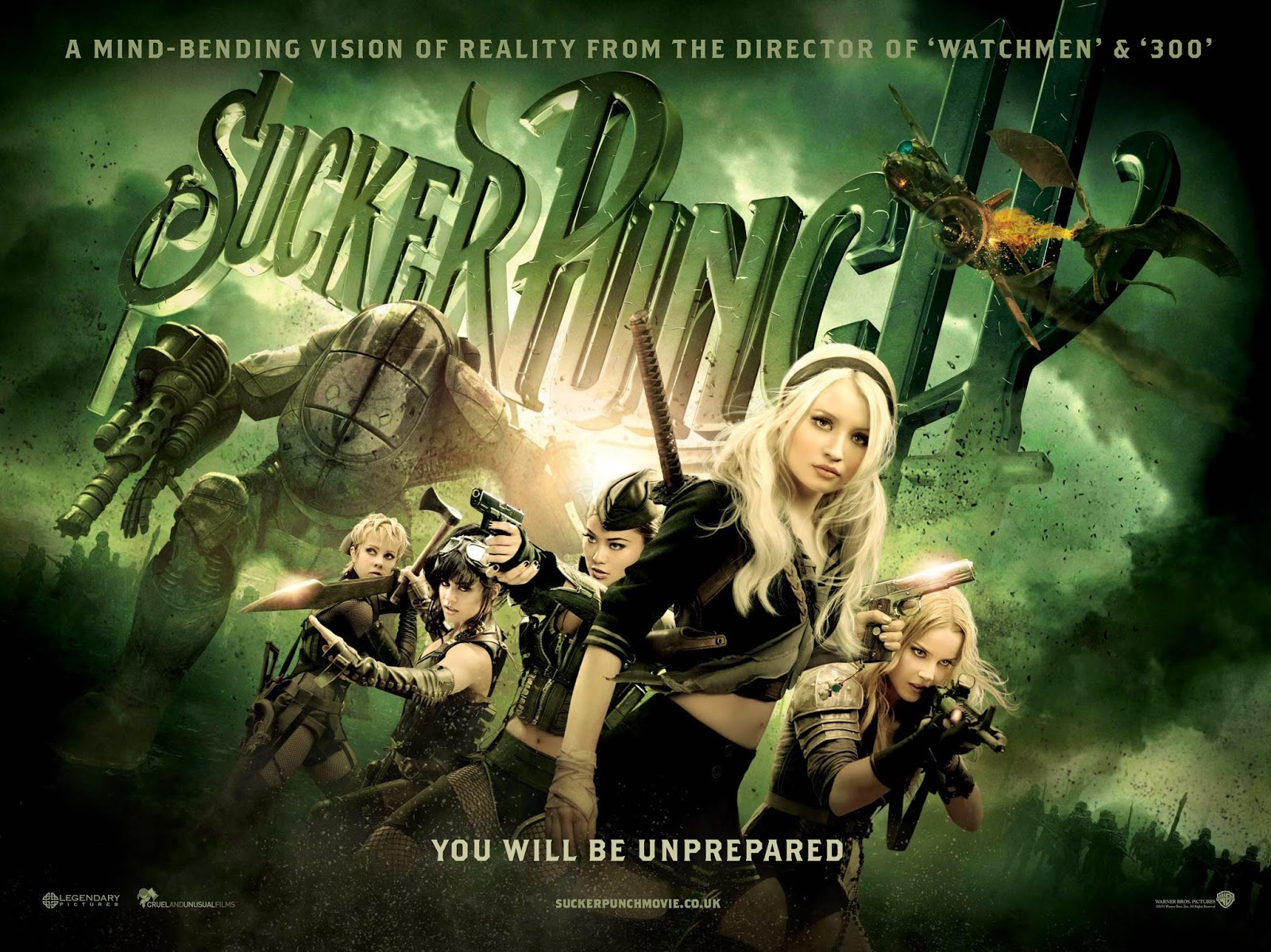 There's nothing like Christmas to make you want to watch a bad movie. It's as much a part of the holiday spirit as decorated trees and mistletoe, only less expensive and uncomfortable. I saw this one with my infuriating extended family last night, and now that I've escaped from their ever-pessimistic grasp, I'm going to review it.

Sucker Punch is about a girl nicknamed "BabyDoll" who is sent to a mental institution after witnessing her butler murder her sister. Because he had previously murdered her parents as well and the movie takes place during the 1950's, the butler is able to check her in easily, and even pays extra to arrange a lobotomy. As if Briarcliff hasn't given insane asylums a bad enough name. Babydoll imagines that the insane asylum also doubles as a brothel, where they teach the girls to dance in order to attract customers. That's a really messed up thing I just wrote, I don't know how this was PG-13.

While at this institution, BabyDoll makes friends with four other girls, notably Rocket and Sweet Pea. During one of her dances, BabyDoll has a hallucination in which a wise old man tells her to collect five objects in order to escape. Also discovering that her dances captivate the people watching, BabyDoll teams up with the other girls in order to steal the items and break out. During her dances, BabyDoll goes on fever dream action sequences where she fights minigun-wielding samurais and steampunk nazi zombies. This movie is an acid trip.

Unfortunately, it's a poorly-written acid trip; it's as if it was written by a man who, although equipped with a vision and lots of inspiration, had never seen a movie before. There is no character development and staggeringly little actually happens in this movie. The majority is filled with hot girls in short skirts slicing and shooting cyborgs and dragons and shit, which is fine, but I would have preferred "better actors" instead of "hot girls" and "a gripping and fluid plot" instead of "cyborgs and dragons and shit." But to be fair, the acting wasn't that bad, and you're often too distracted by explosions and constant threats of sexual violence to notice.

The action sequences are fun to watch, which makes sense seeing as how they're basically just attractive young women surreally mowing down endless waves of enemies. So that's a plus. What's not a plus is the fact that nearly 90% of the movie is montages. There were absurdly few scenes that weren't accompanied by loud music. Good music, but music that should have often been replaced with meaningful dialogue or scenes that clearly contribute to the plot, which left far too many questions unanswered. The movie is kind of a braintwister, but it's too hard to get behind because you, as the audience, don't know the characters. That being said, there is clever symbolism everywhere, in every action fantasy and during the rare real-world dialogues. In fact, I'd say that the symbolism is the movie's primary redeeming factor, and gives way to a very clever twist. One that you should probably look up, because it's pretty hard to realize, probably because it's hidden behind a wall of what could literally be described as a raid on an orc-filled castle followed by a dogfight with a dragon.

The above is an actual screenshot from the movie. It's pretty cool.

Conclusion: Punctuated with young women fighting in awesome, batshit-crazy environments, This movie is so poorly-written that it easily overshadows the "rad" aspects. It's quite a fun movie to watch, but in terms of actual quality it's seriously lacking. Maybe if it had a few dozen less montages the symbolism could be further appreciated. And if there was a decent writer. There was potential, but I'm afraid that no amount of cyborg explosions could have fulfilled it.
Posted by jonwg88 at 7:29 PM