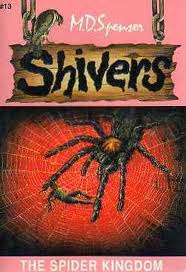 When M.D. Spenser created the Shivers universe, He first said, "Let there be a repetitive introduction and setting for every novel I create to reduce the burden of originality." And then there was a repetitive introduction and setting. M.D. Spenser was pleased, and upon looking out at His many similar landscapes, He said, "Let there be main characters with few discernible differences, and side-characters with personalities so set in stone that there need not be a burden of character development." And then there was everything previously written.

M.D. Spenser then peered out at the world and life He had created and said, "now let there be no suspense or frightening twists at the ends of stories to scare readers, else I fulfill my duties as a horror writer. And let all ghosts created be harmless and lame, and let all books on bullied children be mercilessly boring." And it was so. And hence, the Shivers universe was created. But alas, with a god comes a demon, and from the vilest pits of hell and criticism crawled an impure, heartless being, one with brown hair and a computer, and he was to be called Jonathan Golden, and this Jonathan Golden wove a tongue of harsh brutality against the good M.D. Spenser, and this Jonathan Golden was attractive, intelligent, notoriously good with the ladies, and currently single. The two forces battled for all eternity, each claiming its own occupants off the qualities of the deceased.

It was on this fateful day that Freddy, protagonist of The Spider Kingdom, wandered into the fiery pits of hell, this day four weeks after M.D. Spenser's books decided to discontinue their opening patterns. And Freddy walked into the room, and noticed the devil himself, Jonathan Golden, on his flaming throne. Freddy said, "Hey dude, what gives, why am I in hell?" and the evil and vile-hearted Jonathan Golden replied, "Don't take it personally. Honestly, pretty much every character ends up here." This statement mystified Freddy, and he said, "Why, though? What did I do?"

"Well, the thing is that your afterlife placement is based more on character quality than actual morals. The only people in Heaven with Mr. Spenser are Lynne, David, Winston, and that Australian guy from A Ghastly Shade of Green. I'm pretty sure that David is just there as a joke, and I know that Winston is there just to annoy me. I hate that kid."

"But how come I can't remember anything that happened to me before I got here?"

"Jet lag, but I guess I'll explain because I know how much it sucks to be immersed in something and have it not explained to you at all, ruining the value, a position I know M.D. Spenser is familiar with too. So, here's the story:"

Freddy and Lumpy are best friends. Their hobbies include bullying children smaller than they are, Freddy watching Lumpy slowly kill bugs, and drinking Cokes and playing poker for pennies in their treehouse. Product placement much, M.D. Spenser? Thankfully, we are taken away to something more interesting than reading about poker, namely anything, to show us a prank being played on Freddy. Lumpy says that he has a present for Freddy, a spider, which he fears. He dumps the present down Freddy's shirt, saying it's a black widow, and Freddy believes him, mainly because he's a complete moron.

After freeing the fake spider from under his shirt and being called such names as "pansy" and "sissy", Freddy decides to help Lumpy pick on Tommy Malloy, the local dweeb. Not that he actually did anything wrong, they just thought it would be fun. So they throw his books in the forest and punch him in the stomach before running away. At this point, it's not even funny anymore, it's just kind of cruel, especially since they threw firecrackers at him in the beginning of the book. I guess we see Lumpy's reasoning when his mom whips him with a belt for it afterwards. Nice hinting, M.D. Spenser.

Anyway, the two bullies go back to the treehouse to reminisce about how fun that bully sesh was. Then, all of a sudden, the treehouse collapses and they both make it down safely, with Freddy grabbing a branch and Lumpy landing on a different branch that somehow didn't break under two hundred pounds of pure, grade-A dumb-ass.

After they go their separate ways, Freddy arrives home to discover that a chore awaits. He was supposed to hose his porch rafters to get rid of "some type of bug up there." I know, it's really suspenseful, but it turns out that it was actually spiders awaiting him in the rafters.

Instead of washing away the spiders like someone who isn't a psychopath, Freddy goes in and sprays insecticide all over his porch. After drinking a stunningly delicious and far superior Coca Cola, Freddy is ambushed by a five-foot-tall spider in his living room. Like he freaking pays rent. The nerve. But then, Freddy is assaulted and about to be chomped on when he decides to make a plea for education, which he desperately needs because he says, "You can't be real! Spiders don't have teeth or tongues like yours! I remember that from my science class." Well, usually you get something like that from common sense, which Freddy and appropriately named Lumpy are seriously lacking. The spider agrees to show him some spider stuff. Honestly, I would love an assassin like that. Or a bank robber. He seems like the kind of guy who would let you watch movies while he barters with the police.

From the heavens descended the lord M.D. Spenser upon a carriage made of gold and holy holiness, pulled by flying cars filled with unhappy families uprooted from their big city environment with irritating relatives, and ghosts which should be frightening but aren't, and undeniably bland and unoriginal story-lines, and He did say, "Foolish mortals, Thou doesn't know the value of a truly great story."

To this comment Jonathan did reply, "Great, this guy again."

Freddy seized his chance and pleaded, "Can I please be in a different book? Any other book? I wanna mess around and prank people with David. What a great guy."

To this M.D. Spenser took offense, and did say, "No. I like my books. The covers look pretty and they all have a plot from my favorite episodes of various shows and movies." And with those parting words He did leave, with a trail of unanswered questions to needlessly confusing endings behind Him.

On the way to the Spider Kingdom, Freddy is yelling for help, but I guess his neighbors are too busy or just don't care. I mean, if I saw a kid getting dragged down the street by a giant spider, I would probably think I injected one too many marijuanas. Also, the fact that all spiders speak English is a little strange. They've been here a little while longer than we have. One of them even has a southern accent. At this point, I'm pretty sure that M.D. Spenser lets his five-year-old fans make the story outlines for him. "I want a story about bullies who are eaten by giant talking spiders!" or "I think we should have a story about trees in a swamp that try to kill people and that people should recycle." This is later proven when Freddy is thrown in a web with Lumpy and forced to hold trial before the "Spider King."

Freddy nervously rocked back and forth. And he did say, "So I did all that? I was kind of a douche-bag. And so was Lumpy. Were we really that stupid?"

The devil Jonathan did reply, "Yes."

I believe it is worth mentioning that during this time, there are several spider-related puns intended as insults for the protagonists, such as, "Are you two still hanging around?" and my favorite, "What are you kids doing there — surfing the web?" I'll take that as my cue. So Freddy and Lumpy are tangled up in the repercussions of being assholes, and are escorted to the Spider King. He is, because M.D. Spenser knows nothing of spiders, a giant tarantula. After Lumpy tries to sell out Freddy and Freddy makes a heartfelt speech apologizing for the murder of countless spiders, they are sentenced to death because they're both very dense. I mean, every Shivers character is vacuous, but these guys might just top everybody. The wolf spider executioners storm in, and because M.D. Spenser doesn't know what wolf spiders look like because his only research consisted of looking up big words in the thesaurus, the audience is left description-less.

Suddenly, Freddy thinks of an idea. Instead of facing judgement for being caught up in a web of their own lies, they just run out the door, counting on the big spiders being as afraid of humans as the little spiders. I'm not joking. It makes your skin crawl with idiocy. This whole book. I don't know what Paradise Press was thinking when they allowed this, maybe, "Well, since this whole book is improbable and vapid, including the obstacles, maybe the solution should be, too." After that, the tag team runs off, and Freddy has to leave an injured Lumpy in a hiding hole. I don't understand why, because if there's a worse human being than Freddy in the Shivers universe, it's Lumpy. Regardless, Freddy tries to pull Lumpy up the tunnel with a rope, but can't carry his weight.

Just then, Tommy Malloy walks by and agrees to help, because even the nerds are unintelligent. Or at least shortsighted. After Lumpy is saved, the gang splits and Lumpy returns home and sits down to drink some delicious Coke when all of a sudden...

And in the Second Worst Twist in the Whole Series:
It was all a dream during the spider program on The Nature Channel. They all lived happily ever after even though I hope everyone but Tommy Malloy really will get eaten by spiders.

After hearing this dreadful tale, Freddy thought long and hard and decided upon saying, "Yeah, you can eternally torment me now. I hate my life."

"Perfect. I have a room full of spiders and everything."

"I honestly don't care anymore. As long as Lumpy suffers, I'm fine with whatever."

"Yeah. He's getting eternally tutored by Tommy while his mom sits at the table with him."

Insight into the Complex Minds of Characters:
(When discovering the spiders in the rafters) "It was Freddy against The Great Spider Invasion!"

Beautiful Imagery:
"He doubled over in a gaff of guffaws."

Hip References:
Coca Cola, the most amazing soft drink known to man, according to M.D. Spenser.

Conclusion: The latest in a long streak of terrible books. I will admit I was reasonably thrilled during some scenes, so I'd say this is easily the best of a bad bunch. I can't help but say that this whole novel had a sort of "because whynot?" feel to it, though. I'm excited for the next book. I think M.D. Spenser might be making a recovery.