Shivers 20: Babyface and the Killer Mob 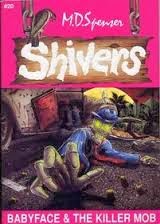 I just want to start off saying that nothing on the cover of this book actually happens. There is no skeleton mobster, that's a portrayal of something M.D. Spenser could have written about  to actually scare children. Which he didn't. With this book. Anyway, it's written in M.D. Spenser's best tough guy voice, consisting of writing "see?" after each sentence and calling himself "Joey, old boy." At one point, it actually says, "Then old Joey's goose is cooked for sure!" It's in first person, of course, so he's constantly correcting his own grammar, mostly when not engaged in dialogue. He also says, "ya" instead of "you." So, now for the plot.

So, Joey is introduced complaining about how "all the dopey grown-ups in the world think they can push us around," so that's really fun to read about for four pages. My favorite line might just be, "I want to kick them in the shins or something and yell, 'Hey, buddy! Who died and left you in charge around here!'" Just like something out of The Godfather. Ya see, Joey's been wantin' to be a mobster, a gangster, a regular Al Capone, see? He's been asking all the local mobsters in Miami if he could join them, but they just tell him to go play with his dolls (this is all in the book, I am completely serious). So one day, Joey sees some mobsters named Lou, Rocco, Jimmy, Jackie, and Mikey.

So these guys, who are actually just stolen characters from The Sopranos with exactly the same names and no descriptions to prove otherwise, are walking toward Joey with baseball bats and crowbars and the like, see? Alright, I'm sorry, I'll stop now. They end up walking past Joey, who asks to join them. One of them thrusts a gun in his hand and says yeah, sure, but only if you kill this one guy. Or the alternative, which means death for Joey and happiness for Shivers readers everywhere (so... me). In the end, Joey says he can't and Jackie takes the gun, pointing it at Joey's head. He squeezes the trigger and... it's a water gun. These mobsters carried around weapons and a painted water gun with the hope that they might run into this kid and play a terrible trick on him. Is this... there's so much wrong with all of this. Is this what Spenser thinks crime syndicates are up to? I mean, unless that guy always carries a water gun for some weird, kinky reason.

They start cracking up, and Rocco actually says, "'You ain't nothing but a pansy, kid. Maybe we should call you Joanne instead of Joey.'" M.D. Spenser does it again, with a burn for the ages. Joey then jokingly threatens to rat on them to the Muscle Gang, their gang (the Killer Mob)'s biggest enemy. That could be considered excusable, but he actually gives a detailed explanation as to exactly how he would rat on them. Jesus, I honestly don't like this protagonist. So the gangsters decide to have him swim with the fishes, which might be considered a little much but something which, at this point, I am not entirely opposed to.

Mikey and Rocco drag Joey to a warehouse, where they are attacked by the Muscle Gang. Both sides managed to miss every shot they fire, so everybody was unharmed. Joey, as he was sprinting away, slipped on some oil and woke up inside a grown man's body. He was driving a car towards the gunfight and took advantage of the situation to try to score some bonus points, maybe hit a squirrel or a stray cat. He ends up scaring off the Muscle Gang members, and the Killer Mob goons get in and compliment him, Babyface, on his excellent and completely ignorant driving.

Then, he can't start the car, giving the Muscle Gang more time to shoot at and miss them. It turns out he forgot to turn the keys. He forgot to turn the keys. He is thirteen and lives in a big city and has absolutely no idea how to drive, not to mention he's a complete idiot. They eventually get away, and then crash at high speeds, flipping over multiple times. Guess how many of them are actually injured. I'll give you a hint: it's less than 1 and more than -10. If you haven't figured out that this is all a dream brought about to teach a semi-relatable moral, now would be a great time.

The trio hitch a cab and start to interrogate Babyface/Joey. Turns out Babyface was the best getaway driver in the business, which, granted, is not very large, but still. They decide to take him to see the boss, a.k.a The Boss. They tell The Boss what happened, and he starts getting real suspicious... see? (I'm sorry, they say it a lot in that scene). Joey starts crying, making them believe that he is Babyface, because that's where he got his nickname. Very creative spin, M.D. Spenser. They are finally convinced when they ask Joey what Babyface's only drink was, and he said root beer. Which was correct.

Babyface, the guy they all thought was either a traitor or monumentally high until minutes earlier, is then assigned to take The Boss's wife, Sondra, shopping. On the way, she reveals that she too was transported from a child's body to an adult's when she was thirteen, and that she's been The Boss's wife for nearly three years. She had to learn how to do a lot of adult things... a lot of adult things. Of course, M.D. Spenser doesn't have any mention of this, and probably didn't actually realize the implications, which is completely fine by me. That would be an awkward conversation.

On the way to the mall, the pair is stopped by the Muscle Gang, who interrogates them about an attack they heard about. Sondra begins to tell them everything about the plan to launch an all-out attack on Muscle Gang headquarters, a plan that was mentioned at some point earlier in the book that I completely forgot to write about. Then the Killer Mob breaks in, and Joey stands up in the middle of the gunfire and yells about how he just wants to be a kid. Can you guess what happens next? I'll give you a hint: what involves waking up from an extended dream sequence and could have been written by a mass puppy murderer? Everything's happily ever after, Joey is his old kid self again. Of course.

Hip References:
The Sopranos. I still can't tell whether that was meant to be noticed.

Did... Uh... Did You Even Go to School?:
Everything, every single thing. I swear to God, this book could have been written in twenty minutes by a quadriplegic monkey.

Conclusion:
I just can't tell whether this was ripped off of a movie, or just a combination of one of those "careful what you wish for" movies, like Freaky Friday, and mobs from animated Nickelodeon TV shows. There was just no effort, no thought put into this at all. So... not his best work.
Posted by jonwg88 at 3:48 AM