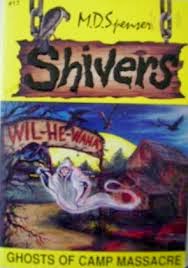 Yeah, so I kinda dropped the ball on this one. I ended up skipping 16, and I just reordered it from Amazon. So, I'll do #16 next weekend. I've decided that I'm not going to do those little extra quotes at the end, because this book is full of the stupidest lines I've ever seen in a Shivers book, and that's an extremely hard record to hold. The narration is unbelievably irritating. This might be even worse than when Winston was the protagonist. It has an extremely holier-than-thou feel to it, and the protagonist is always saying "Oh, this word is spelled this way and means this, in case you didn't know." It's filled with strange innuendos and is the sauciest book since The Curse of the New Kid. The storyline is O.K, but the narration just kills it for me. Well, let's get started.

So, Samantha and her brother Rex are going to camp Wil-He-Waha for the summer. For typing's sake, I will just call it camp Waha. Samantha gets scared easily and earned the nickname "Spooky," and her brother is called "Rex the Pest." Who actually names their child Rex? I think the best way to describe Spooky would be with a quote: "I'm only eleven, but I'm very very mature for my age. I read books without pictures." That was on page one. That was when the book was ruined for me. Spooky is complaining about how monotonous the bus ride is, and helpfully says, "monotony means boring, just in case you didn't know." I did know, but thank you. Oh, then Rex plays some trick on her with an ice cube or something.

This encourages the sentences, "It's a conspiracy. In case you don't know, that means everybody's out to get you." Well, I appreciate the gesture. She had screamed, so her crazy bus driver flipped out at Spooky. Oh no, how could he have picked on our beloved protagonist like that. Oh no. He threatened to throw her off the bus. Her response? "If he was going to throw me out to the wolves and perverts, I was not making it easy for him." I don't think the bus driver would waste his time. Something like this is bound to happen to her eventually.

Then, M.D. Spenser introduces some characters. First, there's Rex's gang: Red, Tommy, and Squirt. Tommy wears black shoes, black pants, and an "Insanity Saints" shirt. There... there has never been a band called Insanity Saints. There is no Insanity Saints. No, wait, listen to this: "His name was Tommy. They ought to have called him Blackie." Classic M.D. Spenser, stating the obvious in such a way that it makes it sound like you're an idiot for thinking it. "There was a kid they called Squirt. I hoped it was because he was small for his age." Me too. At least he's making jokes for his current audience: adults who read these as a kid and adults into children's horror.

Then there was an older boy, Brad. "I didn't like his face. He had pimples." Now, we are finally at camp Waha. The campers are introduced to Mr. Ruffin, the camp director, and their counselors, two of which are named Randy and Mandy. Spooky goes to her cabin with her cabin-mates Jill, Melissa, and Satin. These are pretty weird characters even for M.D. Spenser. Jill and Melissa are totes twinzies and <3 each other forevs and evs, brushing each other's hair and playing with Barbies. It's a trying experience, but their bond of BFF's so close they're like Sis's is so strong that even being side characters in a Shivers book doesn't break it. Satin is one of those people that is going through some tragedy that nobody else wants to hear about so they mention it in subtle conversations, like saying, "Oh, yeah, this food is really good. I never have food like this with my parents because they neglect me and don't want me around." Yeah, she's one of those guys.

For dinner, the campers had canned food. There is some internal dialogue consisting of "Ew, boys are so grody, ew," and Mr. Ruffin says that they have to wake up at sunset for more labor. I just don't understand why they would market and run a summer camp with such little mass appeal. When they get to the cabin, Spooky says that she's an "insomniac. That's somebody who has a hard time falling asleep. It's spelled I-N-S-O-M-N-I and then ACK." Yes, I know what a goddam insomniac is. Also, why repeat the spelling if it's literally in the previous sentence? Better question: why repeat the spelling wrong? I mean, it's more stupid than...
Topical Political Reference: temporarily shutting down the government.

Not-so-topical: declaring a ticket to heaven in response to the murder of Jews and Muslims in defense of Jerusalem.

Wildly Inaccurate: wanting to blow up the U.S. because one is Muslim, all of which are terrorists.
or
All of them gays trying to turn my son/daughter/dog/self into one of them.

Whatever way you look at it, it's unnecessary. So, Spooky tries to get some sleep reciting the phone book (you think I'm joking but I'm not), but ends up with no sleep. If only she weren't a freaking insomniack. Oh, but then we get to meet Brad's cabin: twins Ed and Ned, whose names were a real treat for me. Also, a total flunky nicknamed "Malarkey." No, stop, there is not a nerdy, lackey character named Malarkey, it's too good to be true. This is going to be way too much fun.

That night, there's a campfire. Mr. Ruffin tells a story of a family of settlers brutally massacred by the Waha Indians. Is this going to be one of those books where it turns out that the settlers actually murdered the peaceful Indians? No, that's crazy, M.D. Spenser having a cliché and obviously ripped-off plot and a horror aspect and premise that are totally unrelated? That's just malarkey. Oh, I think we just created a stereotype for books 10-20, since the characters stopped moving from big cities. Lucky us. Well, the next day is spent painting the bathrooms while Satin says things like, "So you have a brother? Well, my parents neglect me. How's your day going?" In bed, Spooky thinks that there is someone invisible sleeping beside her. I feel like we went too long without a little snippet of Spooky wisdom, so here goes: "invisible, if you didn't know, is spelled just like it sounds except there's an S instead of a Z." I'm so freaking tired of this. See, this is why Shivers shouldn't attempt character development, it just ends up looking like Sarah Palin attempting to teach a kindergarden class.

Because the readers never tire of reading about camp activities, the group goes on a hike. Here's a quick description of Brad's gang: "Brad looked supercool. Brad's bad. Ed and Nd just looked like nerds in sunglasses. Malarkey was loaded down with all the stuff Brad and the Twerp Twins didn't want to carry." Classic Malarkey, sucking at everything. Spooky thinks that she sees a face in the Old Mill, and gets taunted by everyone including Malarkey. Jesus Christ Malarkey, you killed it. Nice job ruining the joke.


Oh, but the hike was actually for picking up supplies from a hardware store. Haha. But cool kid Brad is tired of the system, and decides to rebel and go out to the old mill. He invites the girls, and he jabs Malarkey once during the conversation, so it's fun to read. But then, Spooky says, "'Good riddance... That means scram. In case you didn't know.'" I almost got angry, but then "'We know you wet your bed,' said Malarkey Marky, snickering and giggling." I'm tired of your shit, Malarkey. WHY ARE YOU EVEN ALIVE? WERE YOU PUT ON THIS EARTH JUST TO SUCK REALLY HARD AT EVERYTHING? Only Satin agrees to go to the mill, though, probably because Malarkey scared the rest of them off. But when they come back, everyone is screaming and Satin's hair turned a ghostly white.

At breakfast, Brad's telling the story, with backup from Ed, Ned, and Malarkey. After Brad said he saw a dead baby and screamed, Malarkey said, "'And I just about pooped my pants when he did!' Malarkey testified." There it goes, Malarkey. There goes the last smidgeon of respect I had for you. You're done, Malarkey. You're in the negative zone. Then, Spooky meets the ghost of Emily, one of the settlers, while picking blueberries. She tells her to meet at the Old Mill, but Spooky figures that nobody cool is gonna be there so she ditches. Oh, and it turns out that the other kids never went to the Old Mill, and Satin dyed her hair white to trick her. She dyed her hair white. To trick Spooky. I think M.D. Spenser got these characters straight out of a Goosebumps book or something, because they set a new record.

The next night, Spooky goes down to the mill and, guess what, I was right. The family slaughtered the Wahas. Crazy. Spooky, the chosen one for no reason that is ever explained, refuses to set them free. The group gets back on the bus and...

In the Tritest Twist Ending Yet...
Spooky speaks to them on the bus, using her heart, and sets them free. Kind of late, but whatever.

There is no insight into the complex minds of character today. You can see why.

Beautiful Imagery:
"I felt something cold and wet, like the tongue of a corpse, lick the side of my neck."
and
"With white hair and white skin, she looked like a glass of milk. A glass of dead man's milk."

Did... Uh... Did You Even Go to School?:
The history. And some definitions.

Conclusions:
With a satisfying storyline and ending, this is definitely one of the worse Shivers books ever made. It's just so goddam frustrating. I was angry the whole time I read. I just wanted it to end.