Shivers 12: The Secret of Fern Island 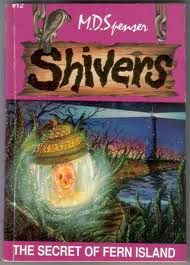 Believe it or not, this book was actually really good. Well, certain aspects. It was not bad for a Shivers book, but the characters were idiots, the ending was too confusing to be any good, and there were no explanations. Pretty good, though.

After reading it, I decided to search the ending online. I found many people commenting on how amazing it was, and how it was just as good as they remember it to be. Seriously, they totally loved it. One person even said, "best book ever." I liked the book, but Jesus, that's a little much. Honestly, I just think that seeing one diehard Shivers fan made everybody else's inner diehard fan come out, trying to win approval by expressing how much they loved a book that is meant for children half their ages. But as a wise man once said, "If you put fifty children with Down's Syndrome in a room there is going to be a lot of hugging."

Our protagonist, Stephanie, and her purely platonic best friend, Kenny, are natural-born adventurers. I don't see it, but whatever. Anyway, Kenny wants to cross a forbidden bridge, a rickety old bridge that leads straight to Fern Island. Also, Fern Island was closed off to the public for some reason. Kenny wants to go meet a boy who fishes all day every day, carryin' around his little lantern and fishin' hat and fishin' pole. What a tool. In the end, the duo decides to head on back home and return tomorrow.

O.K, let's analyze. This book starts one day before the adventure does. They actually start to go to Fern Island on page 11. Also, there are no character descriptions, except for them being eleven. So far, so M.D. Spencer. All right, let's backtrack five pages.

Stephanie says that she is babysitting for her younger sister, Becky, and her friend, Brooksie. Freaking Betsy and Brooksie? Betsy is a nine-year-old who just loves mysteries and adventure. Brooksie, who has an uncreative character to match her uncreative name, is a nine-year-old goody-two-shoes. Josh Jennings would be having a field day. The four of them make it over to the bridge, and we get a sense for Brooksie's personality when she says, "'Ooooh, you shouldn't say darn,'" in response to Kenny saying the word "gosh-darned." You finally did it, M.D. Spencer. You finally destroyed my tolerance for idiocy. I was hoping we could be civil during all of this, but if it's war, it's war. You're on, my friend. Also, I can think of hundreds of things more fun than sneaking onto a big deserted island hunting some weird little kid, first of which is making the list. Kids these days, I swear.

The party of four decide to split up when Kenny goes back downstairs and the rest cower in fear at the top. Unfortunately, the spectral presence decides to work its way down from the ceiling. An old phonograph starts saying, "SWIM...YOU...CAN?" over and over. They can't figure out what it means. For the longest time, they just can not  decode it. This is my idea of their decoding process:

1. listen to code
2. Think about what code means if said forward

If you took a dog's brain and put it in a monkey's head, that monkey would be smarter than the four of them combined. It would also be dead. Meanwhile, Kenny had his own adventures for the reader not to care about. Basically, he ran into a swarm of bats. Then he ran away from the swarm of bats, which was hard because usually he has Stephanie to work out which way is "up" on stairs. After much hugging and rejoicing, the team decides that to split up again after the little boy appears and disappears in the window of the top story of a lighthouse and the phonograph starts saying, "DOWN FALLING IS BRIDGE ISLAND FERN" is a good idea. If you can't sense the ending, I'll just give it to you: it turns out that they actually died and are now ghosts. But seriously, I actually threw this book across the room after they still couldn't decode this one.

The group that wasn't dropped on their heads enough not to go downstairs again, namely everyone but Kenny, finds an old newspaper. The letters are in English, but the words make no sense. The secret? The gosh-darn words are backwards.

Once, when I was a kid and I was angry, I punched a wall as hard as I could with one of those fingerless gloves. It hurt, but not as much as this book did. After the group of three finally find the kid, he is actually a ghost! Kenny rejoins them and they run back upstairs to hide, and a new message comes on the phonograph: "FISHERMAN A NOT IS HE." They actually figure it out this time. Well, Brooksie  does, anyway.
"'It's talking about a fisherman and that boy is always fishing,' she said slowly. 'I think there's a connection."

Well, whoop-dee-fucking-doo, Brooksie. You are a regular- I'm just gonna say it- gosh-darned Sherlock Holmes. Everybody in this book is horrible and so is the plot and the ending and everything is just terrible. They decide to look in the newspaper now that they know its secret. The story is about a boy who died fishing. And apparently a whole island-based city was shut down because of it. At this point, the whole group is freaking out. Stephanie is trying to remember what words suggest leaving an area, Kenny is trying to figure out which way is out of the lighthouse, Becky is trying to figure out what the story of a boy fisherman could have to do with a mysterious boy fisherman, and Brooksie is conflicted because she was always told not to run inside.

It actually takes them ten pages to make the connection between the boy and the fisherman, and after the phonograph tells them that the lantern on the table must burn, they blow it out because whynot? and run outside. Also, whynot? is a new word that I made so I don't need spaces anymore when I say "because why not?" They hear a scream, much like the scream I let out when I saw the reviews for this book, and bike away.

I swear that if stupidity was contagious, I would have caught it just by looking at the cover of this book. After pages of biking and hearing voices, they finally reach the bridge, where they cross without incident. The group is walking down the block, out of harms way when all of a sudden...

Then, in the Twist too Confusing to be Good:
The boy shows up and asks them in a deep voice if they can swim, with his lantern lit up in his hand.

Insight into the Complex Minds of Characters:
Upon hearing the phonograph: "'What does that mean?' Betsy asked again.
Warily, the girls approached the ancient record player.
'Maybe it doesn't mean anything,' Stephanie said." It was literally saying, "SWIM YOU CAN." To be fair, I suppose the code is easier to the ghost boy because it is meant for people as least as intelligent as a six-year-old.

Beautiful Imagery:
"Stephanie got up and walked toward the phonograph. She watched it spin in silence. Then it gurgled and began speaking again."

Hip References:
All I have are phonographs and lighthouses.

Conclusion:
At first I thought the book was good, but then I wrote a synopsis and it turns out it sucks hard. The writing and voice were good, but everything else was terrible. And what was up with the ending? How did he not disappear when the lantern went out, is he a threat if he's not corporeal, what did the messages mean? This is as confusing as Inception, but without the redeeming value.