Shivers 23: Night of the Goat Boy 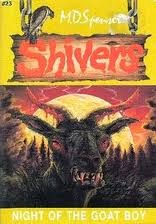 So... the title of this book. I would usually reference a writer with a knack for terrible titles, but M.D. Spenser actually fits the bill really well. But the good news: it's in third person! I don't have to hear every thought of whatever eleven-or-twelve-year-old brat I happen to read about. Unfortunately, the 22nd book has not quite gotten here yet, so I'm skipping ahead. The thing about this book that pains me the most, though, is the back summary.

"Lights out, campers! Would a show-time summer for Nathaniel keep the illusion alive or was he in the real life role of goat food? He was one happy kid at Camp Spotlight, where acting was the way of the day. But at night, he and his tent-mates didn't dare doubt the campfire story of Goat Boy. Half boy, half goat, and all teeth. Get real! There's nothing to fear. Or is there? Nathaniel was so confused. To be, or not to be--scared? That was the question. The answer will scare you, too.
TWILIGHT OF TERROR..."

I feel like this preview really appeals to its target audience of eight-year-olds with ADD. Speaking of, the first page described Nathaniel (main character)'s little sister, Amanda, trying to make scary faces at her brother. Nathaniel is slim and sporty, with gray eyes (I looked it up and apparently it's a thing). Besides sporting such games as ball-hoop and stick-disk, Nathaniel likes to write and act in plays. Yeah, I really don't know much about sports. During rainy days, he would pass out plays and have his friends act in them, so he's not even that deep in the closet. He had been begging his parents to let him go to Camp Spotlight, and though they were hesitant, they let him go.

The day he got permission, Nathaniel's mom tells him that she met his father at that camp. It went something along the lines of, "Well, we didn't fall in love back then because we were only eleven, but you know how teen pregnancy rates are through the roofs?..." Seriously, though, they did meet there. Oh, and then there's a flashback to when Nathaniel's mom and dad are talking about whether to let Nathaniel go, and how "it" might have gotten worse, but that "it's" just part of the Camp Spotlight experience and they all had to endure it, and how they got out OK. I don't know why, but this made me expect something out of "The Most Dangerous Game." That would be cool.

Anyway, Nathaniel is assigned to tent number 5. There he meets his cabin mates: Jacques, whose introduction is "Hey, dude... My name's Jacques. How ya doin'?" He's a short boy with glasses. Basically, he sucks. That is, until you meet the others: Chris, a suntanned boy with a backwards baseball cap, and Brian, a kid with "dark bangs that flopped almost into his eyes." Wow. These kids are so cool, my computer is actually freezing. The hipness level is, as Jacques would say, "Over 9000." Oh, and then there's Mr. Dingle.

Mr. Dingle walks in during this scene. He wears "a red-and-white polka dot shirt, plaid shorts, black socks and heavy sandals." It's too good to be true. This is what I imagined M.D. Spenser to look like. When he leaves, he actually says, "ta ta." Then Jacques makes fun of him, and the boys are described "slapping palms." Slapping palms.

When the group went for roll call, Nathaniel spots an attractive girl (#luvinterestalert), Jillian. He says that he had grown out of the "girl are yucky, eww, cooties" phase, which is impressive because I haven't even gotten that far yet. But he's not quite to the point of being interested in them yet. Nor will he ever be. After roll call, the foursome heads on over to the cafeteria, where they learn they are doing a production of "You're a Good Man, Charlie Brown." Then they go over to the campfire for scary stories.

Just a quick interruption: Did you know M.D. Spenser has a blog? I know, it's like Heaven online. But that's where I learned that the Shivers series actually used to be pretty popular, back in the 90's's "low-standards children horror book" era (also see: Goosebumps). Oh, then I signed a petition to get Shivers republished. If you guys could do that, it would be really cool, so I could get Shivers without having to buy from obscure, sketchy sellers and travel to dark alleys just to buy a damn children's horror book. Oh, and because I kinda owe it to him for ripping on him all the time. So... yeah, that would be great. Just search up "shivers republishing petition" or something. It's on ipetition.com.

Anyway, the ghost stories. First, Mr. Dingle says one, and it is not shown in the book but was probably adorkably lame. Then, he leaves for something or another and two counselors, Andrew and Austin, take over. They start telling a terrifying story about a teenage boy named Kenny, who lived on a goat farm nearby. He wanted to be an actor, but his father wouldn't let him. He said something along the lines of, "Why waste time acting when you could have a high-paying, steady job like goat-farming?" So Austin snuck down to Camp Spotlight the same year Nathaniel's parents went there, and he kept watching the children from the forest. But, because children are cruel, as illustrated by those bullies in that movie Bully, they started taunting Kenny with the effective but highly unoriginal name "Goatboy."

Eventually, Kenny got tired of their abuse, and decided to go light a tent on fire. Now, seeing as how he visited this camp from a nearby farm and had freedom to leave whenever he wanted, I feel like Kenny's maybe taking this a little too far and is also crazy. So the new Michael Meyers dips, and all the kids get out safely. But then, and this is actually in the book, an overly-concerned parent who works as a stage magician goes over to the farm and casts a spell on Kenny, turning him half boy, half goat. And I thought PTA moms were bad. They are, they're all terrible.

Then, one of the counselors jumps out of the forest and bleats like a goat, which I guess is supposed to be scary. The campers go to sleep, and then wake up the next morning and go to the Mess Hall. They eat a gross breakfast, and Chris jokes, "I see why they call it a mess hall." Hardy har har ha ha ho ha lulz he's so funny. He's a regular Jay Leno. Anyway, auditions were next, and roles were given based on singing ability. Nathaniel was stopped right off the bat because he sings terribly, so he does a little skip over to his buddies to mask his disappointment. But Mr. Dingle likes the skip, a variation of Nathaniel's touchdown victory dance. Homosexuality is a very complex topic for a children's horror book. Way to handle it, Mr. Spenser.

His dancing skills get him cast as Snoopy, the lovable dog-pilot that I remember far too well. During rehearsals, a light fixture comes crashing down, almost squishing Nathaniel. That's pretty much the most excitement we get the whole book. That night, there are bleating sounds from outside, what can only be described as the cry of the goat. The next night, he finds a note warning him that he will be eaten soon. He shows the note and explains the noises to his buddies, who are obviously saints because they don't make fun of him mercilessly. Later that night, the boys wake up trapped inside their sleeping bag. They start to scream and call for help, and are eventually saved by Mr. Dingle.

The five of them go to Andrew and Austin's cabin, but they had been sleeping. Was it the goat boy? With pranks like that, should we care? It seems more like a ghost to me. Tired of recent shenanigans, Nathaniel and friends decide to walk on down to the old farmhouse and check it out. Nathaniel gets caught by the old farmer, who has had visits about the Goat Boy before. The farmer tells Nathaniel he can either take a tour of the farm to prove that there's no Goat Boy, go inside the house and meet "the Goat Boy" (though this one is more of a joke), or get arrested for trespassing. To sum it all up, his options are:
1. probable child molester
2. probable child molester
3. the police
He takes the obvious choice and is given a tour of the farm. It's pretty boring. The farmer makes a joke about the Goat Boy living in his basement (plot point bells going off, yet?).

After Nathaniel is released back into the wild, he goes back to camp and tells his friends all about what happened. It seemed everything had gone back to normal, but that night, Jillian (possible love interest from way earlier) runs around, screaming about the Goat Boy. She said that the head from the book cover was in the bathroom window. Mr. Dingle tells everyone that there's nothing to worry about, but then finds his cabin totally wrecked, with one of his sandals broken (I consider that a kindness). Later that night, Nathaniel wakes up to find the Goat Boy outside the tent. He charges past him, completely disregarding his friends' lives, when the Goat Boy's head falls off. It turns out it was just Andrew.

Nathaniel snatches the head and runs toward Mr. Dingle's cabin, apparently unaware that snitches get stitches. Mr. Dingle gets angry at Austin and Andrew, and they explain their elaborate scheme. Austin's dad was a taxidermist, so they took his stuffed goat head. They also left the note and scared Jillian in the bathroom window, which is extremely creepy considering the 11 to 17 age difference. But they deny that they ever trashed Mr. Dingle's cabin, or ate his sandal.

The next morning, the show goes on. Nathaniel was the best damn Snoopy there ever was, and everybody's happy. Andrew and Austin's parents get told about the pranks, Nathaniel says his goodbyes to all his friends, his parents tell him the only thing they were afraid about was the tradition of telling the terrifyingly spooky tale of the Goat Boy, and the family drives off into a smiling sunset.

Then, the old farmer walks down into his basement. He sees a piece of chewed up sandal and realizes that the Goat Boy escaped again.

Insight into the Complex Minds of Characters:
When describing Mr. Dingle: "Nathaniel thought the guy ought to be in a museum. You know, where they had a figure for Neanderthal Man, and Cro-Magnon Man, and Modern Man. This guy, whoever he was, would be perfect as Dweeb Man."

Beautiful Imagery:
"Mr. Dingle had a voice as bad as his fashion sense."

Hip References:
""'Ohh, burn,' said Brian. He licked his finger and touched it to Jacques's forehead and made a s-s-s-s-s-s sizzling sound." No, stop, it's too good to be true, that can't be. My prayers have been answered.

Conclusion:
The ending was gnarly, and would have been super kick-ass if the Goat Boy had done anything scary before then. Apparently he zipped the main character in a sleeping bag and ate a sandal. Overall, not a bad book. It did a good job of pulling the reader along, at least. Oh, and by the way, I'm changing my schedule to sometime during the weekend. Between Friday and Sunday there will be a post (preferably Friday or Saturday).
Posted by jonwg88 at 1:55 PM