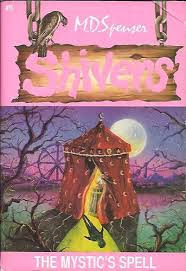 Before I begin this synopsis, I would like to put forth a cause for celebration. M.D. Spencer has finally gone out of his comfort zone. This book, believe it or not, takes place in the protagonist's home town. Where he has a familiar setting! It's crazy! No more repetitiveness! The setup has changed. The book sucks though.

In the beginning, 11-year-old Timmy is hanging out in the town where he grew up and is not in a car or any other kind of vehicle. Except maybe to the Diversity Express, because M.D. Spencer just bought him one ticket out of Repetiville. When his friend Howard asks whether or not he wants to go to the carnival in town, he answers with a tentative yes, because last carnival kind of sucked for him. First, he ran, screaming like a miniature female, out of the haunted house. Then, he threw up on the Tilt-A-Whirl, and Hank, the local bully, decided to call him "The Human Volcano." In case you couldn't tell, Hank's an idiot. He walks around with his idiot friends, Duane and Jason. I imagine they look a little something like this:

Anyway, Timmy decides that he's old enough not to have M.D. Spencer mercilessly emasculate him anymore, so he chooses to go to the carnival. Which is coincidentally about when the three  stereotypical bullies Hank, Duane, and Jason decide to steal his pocket money for the arcade. He decides to stand up for himself, and gets his money stolen anyway, but this time he gets a free headlock. Values. This book has very little.

In Timmy's first pocket, they find a pencil and an eraser. If you'll allow me to sidetrack a little bit, Timmy is a complete loser. He not only has a pencil, but a spare eraser in case the one on his pencil gets overused. Who the hell worries about that, anyway? You could just buy a new pencil, they are everywhere. Weirdly enough, though, Hank and The Gang decide not to call him out on it. When they find his money, Hank decides to nickname him- I kid you not- Timid Timmy. I have to believe that Hank is just showing off a new word he learned from one of his monster truck magazines, because Spencer's insight as to the nature of middle school bullying is just as sharp as ever.

So, some backstory is now introduced. Timmy is weak, can't play sports, and is incredibly smart, at least when it comes to math problems. There's this girl named Sarah who likes him, and that's pretty much it. So after the bullies walk away, Timmy yells that he would do anything to be stronger than them. I think the real horror of this book is that after nine of them, M.D. Spencer hasn't gotten any better at foreshadowing. Despite his beliefs, there are ways to create tension without also completely eliminating the need for it. Well, I'll tell you what happens anyway.

Timmy goes home to ask his parents' permission. M.D. Spencer decides that since he's been so good at employing literary devices, it would be an injustice not to lay down some similes like the raps of a white rapper with no vocal cords or kidneys. See, that was a simile. So Timmy begs like a dog hoping for a bone. His mom relents, and he skips off with Howard, calculator in hand, his mom actually warning him not to rip his clothes like he did yesterday. Apparently her keen perception isn't paired with an analytical part of her brain, since it doesn't occur to her that something might be wrong.

Timmy and Howard walk down through the crowd while being taunted by booth workers who actually call them "chicken." Once again, a stunningly accurate representation of society, this time for carnival workers. He then fools "The Guesser" because he misjudges Timmy's weight, and out of all the prizes, Timmy actually chooses a plastic bookmark with a calendar. O.K, I'm pretty much done with all these characters. And this book, with all its similes.

Timmy goes alone to the lemonade stand, where he chats it up with some girls, including Sally. As he walks away, though, he gets tripped and spills lemonade on some girl. As he hears Hank ask if Timid Timmy had an accident, he suddenly pieces the mystery together. He has a flashback to when he was walking away from the stand and something moved in front of his ankle and he fell. It had been Hank all along, tripping him after he left the lemonade stand. I don't know what diabolical treason sorcery this is, but I certainly wouldn't have understood it if Timmy hadn't explained it to me.

He runs into a sketchy shack for Myra the Mystic, who can apparently grant wishes. Timmy wishes to become strong, and Myra warns that he might not like it. Timmy decides that warnings are for wimps and sticks to his gut. After she casts the spells, Timmy accidentally knocks over all her potion bottles and is sent out, not feeling any stronger. He decides to test his strength by picking up a carny's car to help him change a tire. The carny gives him five bucks for his help, and Timmy decides that he does, in fact, have super strength. The carny offers him a job lifting heavy objects for the carnival, but I don't think he realizes how little mass appeal seeing Timmy lift heavy objects would have.

Timmy decides that the first order of business is taking revenge on Hank. He lures them behind the haunted house and picks up Hank over his head. Hank starts blubbering with a voice "like that of a small, frightened child," which, seeing as he's 11, makes sense. They promise to stay away from him from now on, and they ran away "as fast as if they were fleeing a ghost." Or, say, a kid whom they have picked on for a long time and now has super strength. There are better similes than ghosts, and a simile doesn't even improve that sentence. Now, instead of M.D. Spencer moving away from the topic of Timmy with his super strength to pursue something more exciting, which is to say, everything, he decides to keep torturing the reader.

Next, Timmy wows his friends by beating one of those games where you hit a bell with a hammer. This wins Sally's affection, and pretty much kills what little moral value this book had. Timmy sneaks into his room and picks up a wood statue, so that's fun, and decides not to tell his parents about all this. He then joins a softball game, and gets picked first by Hank. Timmy uses his powers of super fast deduction to figure out that Hank picked him so they could get more home-runs. He hits a ball out of the school. The principal yells at him and makes him clean with the janitor, which I feel should be a standard punishment for children everywhere. Child labor laws are ruining this country's economy.

This is literally the whole book. First, Timmy tries not to draw attention to himself at school the next day. He and Howard goes to the arcade, where Timmy beats the Bicep Buster, a fictional machine with a concept as unintelligent as its name: an arm-wrestling machine. The man calls his parents, and he realizes that going to a sketchy shack in a carnival for wish granting might not have been such a hot idea, since there was a 9 out of 10 chance it was a child molester. His parents ground him for a month, and yet he still doesn't admit anything, even after they use big words to intimidate him. Now the conversation wasn't in depth, but I can imagine that his parents called him mischievous and deceitful, insubordinate and churlish, cantankerous and deplorable. The next day, Hank is all buddy-buddy with Timmy, and he gets invited to live the Thüg Lyfe by a local thug. He decides that he doesn't need to be liked or respected because he has something better: the power of friendship. But now Howard and Sally don't want anything to do with him. Whoops. He then breaks the vending machine by accidentally sticking his hand through it, and his life gets even worse. But he still doesn't admit anything about his powers.

I'm sorry, this is killing me. 80 pages of pure, uncensored boringness. Reading this book is like staring at that color scene that goes on for, like, 10 minutes from 2001: Space Odyssey for three days with no food and water while M.D. Spencer reads The Mystic's Spell to you in a monotonous voice over a loudspeaker. Timmy goes to get his spell reversed after tucking a sleeping bag under his blanket, a trick that would only work if your parents are blind, stupid, or Timmy's. He gets directed to her daughter by the carny from earlier who doesn't get a name or personality, because Myra left. Without her daughter. I think the real scare in this book is the lack of parental behavior that occurs throughout. Timmy's dad threatened to send him to military school earlier in the book, there are tons of snide comments on how clumsy Timmy is from adults, and the principal makes him work for two hours every day with the janitor. Using these clues, I used my powers of super deduction to decide that this town sucks.

Timmy finds the daughter, but she warns him that something could go wrong since she's a novice. He doesn't care, since warnings are still for wimps, and she casts the reversal spell. It works! He's a weakling again!

But, in the horrible and also boring twist: He starts moo-ing in the middle of class. I don't care.

Insight into the Complex Minds of Characters: "In a flash, Timmy realized what had happened. He had been so busy putting his change in his pocket after he had bought the lemonade, he hadn't even seen Hank step up from the side, kick him in the ankle and trip him." Like a sort of Sherlock Holmes.

Hip References: "'Yeah, we got somebody in there like that,' the man replied. 'I don't know her name. For all I know, she's Demi Moore.'" That might barely be able to be passed off as topical.

Conclusion: This book was by far the worst. M.D. Spencer has had some pretty good stories, but this and number 8 were some of the all time worst pieces of literature I've ever read. Also, there was nothing to make fun of. Everything was so drab and lame, I had to make cheap shots at Timmy's parents and the overuse of similes (which was actually quite painful) since there was not enough detail to make any good jokes. For my final words, let's just say that if this book's life, history, and formulation were combined into one being, and that being had a face, I would punch it.
Posted by jonwg88 at 3:44 AM