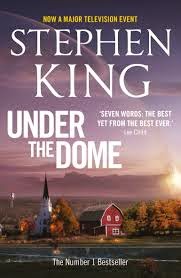 I am a total sucker for Stephen King. Despite what I view as a tremendous gap in writing quality (I'm slightly less awesome), he reminds me of myself quite a bit. That being said, I'm not sure I could ever type out something as intricate, clever, and completely bat-shit crazy as Under the Dome. Seeing as how it's a 1,072 page book (and not of the Shivers series, for once), I'm not writing a synopsis. No way. I will, however, go over some of the plot, up to where it really picks up, I guess, and provide my opinions.

It all starts on October 21st, when Claudette Sanders is taking a flying lesson. On that exact same day, a man named Dale Barbara, or "Barbie" to his friends, is on his way out of the small town of Chester's Mill. All is peaceful, it's all good, when all of a sudden a giant invisible Dome lands on the city.

Well... essentially. We'll leave it at that. The dome cuts a woodchuck that happened to be hopping near Barbie clean in half, inspiring him to maybe take a step back or two. Claudette Sanders flies her plane into the Dome and just explodes, which also probably caused some other people to take a step back or two. Honestly, this is when things start to pick up, and they don't go back down. This book has a constant stream of shit hitting the fan, and it goes off the rails for so long that it practically blazes a new path. Here, I'll show you what I mean.

Barbie meets a man on the other side of the Dome, and the two hit it off. Meanwhile, 21-year-old Junior Rennie, during one of his many migraines, decides to pay this girl, Angie McCain, a visit. You see, Angie sort of instigated a fight between Barbie, who is ex-military and totally badass, and Junior's posse. Junior, because of his tendency to be a wild card all the time, punches her over and over again until she dies. I mean, I'm sure a lecture or heart-to-heart conversation would have sufficed, but OK. He actually makes a reference to Shawshank State Prison, which would be annoying if children horror writers did it but is kinda cute in a Stephen King book. To be fair, Shawshank is an actual prison, but it's also in Ohio, which is a few states away from Chester's Mill, Maine.

Plenty more people die because of the Dome, including the Chief of Police, who I think would have made a great good guy had his pacemaker not exploded when he touched the Dome. It does that, it has a tendency to blow up electronics people have in them. Barbie and his new friend find out that the Dome goes all the way around, which makes sense seeing as how it's a dome. One thing I will say about this book is that it has a lot of foreshadowing. Which is fine. I don't really dislike foreshadowing, but it does end up being a bit excessive. For example, 26 pages before the Chief of Police dies, Stephen King says that he dies. He says that the next time his wife saw him, "he was dead." Well, thanks for spoiling it for me.

I understand the need for foreshadowing, especially in a book like this. Most of the time, it effectively builds up suspense. At one point a doctor, Rusty Everett, who becomes an important character, doesn't snatch an important file (I'm not going to spoil what it contains). The book says that he will come to regret it several times, which is nerve-racking, it makes me fear for what will happen next. When King says that a big event will end badly, I'm on the edge of my seat, I have to know what happens. When I learn that a character is going to die... it's just disappointing. I still want to read the book, but I try to stop caring about the character. I end up feeling much less when the character actually dies. I'm not completely sure how to express it... It's kind of like in Lost, with the flash-forwards starting in season four (I'm currently on season 4). When I see that a character dies in the future, I'm surprised, but I'm also like, "Hey, what the hell, Lost, I don't wanna see this crap, I wanna be surprised, I wanna be devastated when somebody dies, I don't want to know episodes before it actually happens." Obviously, Stephen King likes doing this, since it happens constantly in The Stand as well; maybe it's a matter of opinion, but I cannot get myself to like it.

Getting back to the story, there is a lot to cover. The town is run by three Selectmen: First Selectman, Andy Sanders, Big Jim's puppet; James "Big Jim" Rennie, the main antagonist, and Second Selectman; and Andrea Grinnell, Third Selectman, with a good moral compass but addicted to Oxycontin. Big Jim becomes a sort of dictator, putting a complete tool, Randolph, in the position of Police Chief and making Junior and his buddies the new force. God, are they ass-hats. The worst is Carter Thibodeau, because not only is he cruel, he's also smart. A dangerous combination.

Along for the ride are the three musketeers: Jon McClatchey, Benny, and Norrie. These three radical skater-dudes are as gnarly as they come. There's Julia, owner of the local newspaper, Reverend Lester Coggins (can I get an Amen) and Reverend Piper Libby, each of their own church. There's professor Thurston Marshall, his girlfriend Carolyn, and the Dorphans (Dome Orphans) Alice and Aiden. They're adorable. Then there's one of my favorites, The Chef. He is always high off of crystal meth and lives in the basement of a church. He's everything I wanted to be when I grew up. He says things like, "can I get an Amen/Hallelujah," "Can you dig that happy crappy?" and "You can't trust your Oriental races." He's blatantly racist in a way that seems almost innocent, and it is very entertaining.

There are so many characters I can't even begin to list them all. King does an amazing job with character development; everybody changes in one way or another, people change sides constantly, and each person is so three-dimensional they're almost four-dimensional, and you really can't find it in you to wholeheartedly despise anyone, although I wished for plenty of deaths. Junior is a despicable character in the beginning, but when he meets two children cut off from their mother by the Dome, he acts nice for them, and he almost makes you want him to be happy. It is fantastic. There are so many not-so-mini mini-climaxes that the whole book is a thrill ride from beginning to end, but when the real climax happens, you're still aware enough to cry yourself to sleep.

Much of the book is centered on the battle between Team Barbie and Big Jim, who is leading most of the rest of Chester's Mill. Team Barbie just never catches a break, never, and so many other factors come into play that you'd think that you'd get confused and that the plot would be convoluted but you don't and it isn't. King manages it perfectly. I will complain about one more thing, though: Julia's dog can hear dead people. All dogs can hear "the deadvoice." It's very sudden, and crucial to the plot. The voice tells the dog to deliver an important file to one of the main characters. But... God forgive me... because whynot? This could be a reference to an earlier Stephen King book, or a connection to a later plot point that I suspect might be true but that I don't want to address because of spoilers, but I don't think so. I think it's just a big Deus ex Machina. Stephen King can't just say, "Oh, there's been a long, non-paranormal battle raging for a while, and there's a crucial file hidden away somewhere that the good guys need... oh, and dogs can talk to ghosts now, can you dig that happy crappy?" It's kinda lame.

One thing I did love was the change in moods. It was always perfect, from sappy and cheerful to dark and heartbreaking in a single paragraph; always where you'd expect the changes to occur, and the optimal tone for each situation. One minute, Rusty is chillin' with his daughters or the Chef is providing deep philosophical statements, the next Carter and his buddies are raping some poor girl or your favorite character is brutally murdered. There is only one term I can think of for atmospheres and a story done this well: gripping.

Oh, and the climax is amazing. As demonstrated time and time again, King loves to- and does it well- end with a bang.

Insight into the Complex Minds of Characters:
There is an unholy amount of these, but this one stands out to me because it's cheesy as hell and kicked in before I could appreciate the changes in tone. It's about Rusty's daughters. "Rusty called back, and stood to blow kisses from the palms of his hands. Each girl caught one; when it came to kiss-catching, they were aces."

Beautiful Imagery:
"He was in the middle of the road again––fucking the white line, Phil would have said." Oh, and Phil is The Chef, by the way.

Hip References:
This is great, King actually mentions a nonexistent sequel to Lost called The Hunted Ones. He says that one of the characters watched it. I think Stephen King is thinking of making a sequel to Lost. I cannot describe in words how amazing that would be, I just can't, but I will say this: if he actually creates a show called The Hunted Ones, and it is "a clever sequel to Lost," I will write a twenty page essay explaining why Stephen King is the greatest thing since- no, why he's better than- sliced bread, and I will email it to him and post it to this blog.

Watch Out for This Character:
Her name is Velma Winters. She is the scum of the earth. It's hard to explain why I hate her so much, other than the fact that she's a selfish asshole, so I won't. To explain myself would mean that Velma has some meaning, any significance at all, but she doesn't. She is awful.

Dude, Don't Look, but I Think That Guy's a Psychopath:
Here are some Junior Rennie quotes:
1. "I'm fine as rain."
2. "At least that's what I breed and see on TV. Right or false? True or wrong?"
3. "'Minions,' Junior whispered, 'Just another one of Big Jim Rennie's filet minions.'"
These are his less insane moments.

Conclusion:
Read it. Everything happens all at once, so there's never a dull moment under the Dome. The characters are... human would be the best word for them, so it's easier to hate them than to love them, but it makes it feel all the more real. And the main characters are definitely worth reading about. Stephen King does such a great job manipulating the reader's feelings for Chester's Mill that you really can't hate the ending, and the morals and values to be taken and interpreted are a gift all on their own, so I will say this: when you finish this book, think about the wisdom Stephen King has bestowed upon you, and wear it home, it'll look like a dress.
Posted by jonwg88 at 2:41 AM