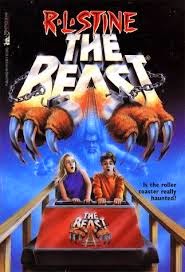 As many of you may know, it is currently three days after Thanksgiving, two days after Black Friday. I spent both these days playing video games, ignoring the family surrounding me. And I'm grateful for that.

I'm grateful for many things, actually, though I may not show it. Aforementioned video games, for one, and Scott Pilgrim comics. American Horror Story, Ninja Sex Party, and M.D. Spenser. And now, R.L. Stine. Sort of. I'm not sure if I ever explicitly stated this, but I'm never going to review Goosebumps books. There's already a hilarious blogger that synopsizes those over at bloggerbeware.com. I can't believe I haven't mentioned him yet, he was my inspiration, but I guess that's what Thanksgiving's all about, right? Anyway, I found a book with no affiliation to Goosebumps but that was written by R.L. Stine: The Beast. I'm not grateful for this.

This book... I haven't read a Goosebumps book in ages, but from what I've heard, they all suffer from M.D. Spenser's biggest flaw: wasting pages and pages on nothing. Not only is this book no exception, I'd say it's a shining archetype. And you'll see why.

The novel begins as our serious-looking protagonist James is riding the legendary roller coaster, The Beast, with his pretty blonde cousin, Ashley. They both love it, and even though it's almost closing time, Ashley convinces James to go on one more time. They get in line behind a couple of teenage boys who tell the kids that the roller coaster is haunted. They even back their claim with "It was on the news... on TV." Local news, maybe. And then there's some fight that occurs when Ashley calls James a "nervous nut" or something, I don't know. And it wouldn't be children's horror without tons of cliffhangers, like at the end of chapter two, when James feels an icy grip on the back of his neck and it turned out to be Ashley... grabbing his neck. I miss Q.L. Pearce.

When the ride comes to a stop, James opens his eyes to discover that Ashley's gone. She's actually gone, it takes a chapter to find her. By the time he does, the park's closed. James wants to go home, but Ashley bets him that there really is a ghost haunting The Beast, so he agrees to stay overnight. They start to walk to the coaster when, at the end of the chapter, Ashley pulls James behind a shrub. It seems like it's too late, that the guard nearby already saw them, and as he walks toward them he literally says "Hey––caught you..."

To his buddy, another guard whom he was greeting. Fuck you, R.L. Stine. Because it's so foggy, the guards couldn't see the two kids. The two of them then sneak off and James trips, catching the guards' attention. Dammit, they pulled a Jurassic Park 3. The pair runs to The Beast, ditching the guard. I'm gonna vent about this book for a sec: R.L. Stine does that thing where he writes a sentence followed by another sentence filled entirely with synonyms to the previous sentences's verb. For example: "Both knees throbbed with pain as I started to run. Stumbling, staggering forward." This is fine, but he does it a little too often. But whatever, not important. Moving on.

Speaking of, The Beast suddenly starts moving. The cars I mean, not the platform. The kids spot an old man leaning over the controls. He calls them over, and they actually walk over to talk to him. Two kids gonna die tonight. He tells them that his name is P.D. Walters, and that he tests The Beast every night, a completely legitimate-sounding job not fit for a ghost. He then tells them that he had worked at King's Island amusement park for sixty years,  back when it was called Firelight Park, a beautiful park lit with torches, before it was destroyed by a tornado. Not a ghost.

All of a sudden, the guards show up. The kids jump in the roller coaster and P.D. Walters sends it forward. Great, now they've escaped the guards indefinitely! Actually, when the kids pull back in to the platform, they're in Firelight Park in the early 1930's. They sneak in through a gap in the fence, and everything's so old-fashioned it's like they walked right into a Disney princess story. That's... does that count as a reference? Regardless, the cousins go straight to an ice-cream stand and ask for frozen yogurt. I was surprised, but learned not to be as these two never get less stupid.

A quick example: they don't even attempt to change their clothes until they're roughly three-quarters of the way through the book. I mean, showing ankles was borderline pornographic back then, so Ashley's semi-modern clothes must be downright scandalous. Which is why two guards start chasing them, again. They go back in time halfway through the book. Not much happened in that time, and even less happens in the second half. It's painful. First they escape the guards. Then they hide backstage in the freakshow, where, in the only scary moment of the book, the circus freaks begin messing with the children. Then they run from guards again and meet Paul, a kid who helps out the cousins. He leads them to a used clothing drop, where they change. Paul loves the amusement park and sneaks in constantly. I wonder if he's P.D. Walters. No, it couldn't be, that would be too easy.

Please, Paul, do the world a service and progress the plot, I'm begging you. It almost seems like R.L Stine will let the book go somewhere when the gang searches for "P.D." and The Beast for a little while, but then they buy hotdogs. Then they go on lots of rides. Finally, they find a newspaper with the same date that the park was destroyed. With the threat of death, the characters decide to do something, anything at all. They begin trying to warn the people that they're from the future and there will be a tornado soon that will kill most of them. This happens for too long, until finally they say P.D. Walter's whole name and Paul tells them that he's P.D. Walters. OH MY GOD WHAT???????!? It only took fifteen pages until the end of the book for them to realize. The group is then chased by more guards for some reason. I don't know, maybe the park just has a general lack of excitement. The kids escape through the fence and finally find the beast in the forest where they arrived. Oh, wow, who would have thought the roller coaster wouldn't fucking move.

James and Ashley jump in the coaster while P.D. Walters pulls the lever. Two guards grab him and two other guards jump behind James and Ashley. But when they arrive in their time, the guards are skeletons, whose bones crumble to dust. There are so many logic flaws with that, that the guards just died of old age, that I could write an essay on it. It's truly the stupidest thing to happen in all of anything. Just please, do me a favor and think about it for a while.

Guards grab James and Ashley, calling their mom. As they wait at the front gate, they notice a plaque for all the victims of the tornado. P.D. Walters is right on there, which prompts foreshadowing for the most dreaded sequel since The Kingdom of the Crystal Skull.

Insight into the Complex Minds of Characters:
"Why was I going to spend the night in a foggy park, hanging out, hiding, waiting for a ghost to ride The Beast? Because of a ten-dollar bet? I guess I was doing it so Ashley wouldn’t call me a jerk again. I mean, that’s a pretty good reason— isn’t it?" No.
Or
"His hand was warm and dry. It didn’t feel like a ghost hand."

Beautiful Imagery:
"Her face was as round as a balloon, and she had at least twelve chins."

Memorable Cliffhanger Chapter Ending (a Little Nod to Blogger Beware):
James puts on his clothes to discover Ashley and Paul are gone! Just kidding, they're right outside the tent.