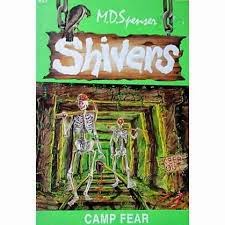 One of the main characters levitates after falling off a cliff and the book never explains how. 10/10.

So, I've been playing the Bioshock games on Xbox 360, and I've got to say, they are totally awesome. Like, it's probably one of my favorite series now. The depth of these cities, the creepy, unnerving and dystopian atmospheres, it's incredibly gnarly. Plus, they have demonic little girls walking around with giant robots and stabbing people with syringes, so... pretty much perfect. I've decided that as soon as I'm finished with the first game, which will be very soon, I will do a review on it. Then I will play the second one, and do a review on that and Bioshock Infinite, which I've already beaten. So... look out for that, I guess.

I could start by telling you what I hate about this book, but I think I'd rather let the book itself do the talking. It starts out with Jane, our protagonist, leaving her house to go on a camping trip with the rest of her grade. She's super excited to bunk with her best friend, Lindsay. They're such BFF's that they're practically sisters. They finish each other's sentences and each seems to know what the other is thinking, which is awfully convenient considering that the two of them are exactly the same. I really mean it, exactly the same. Jane also expected to be bunked with her other friends: Carolyn, Jaimie, Alyssa, and Katie. Yes, she has five friends. Remember these names, because they are not in the least bit important at any point in the novel.

Well, Jane was shocked to discover that she was instead grouped with Molly, a huge nerd, and Chelsea, the popular diva-type. I'm gonna tell you right now that these are the only characters with personalities. The gang goes to their cabin and Molly loses her glasses, so everybody but Chelsea helps her look. While Jane is looking under the porch, she hears a creepy slithering noise, but it turns out to be Chelsea sticking a coat-hanger through the floorboards to scare Jane. First of all, she is pulling such an Adam right now. Second, why did she bring a coat-hanger on a camping trip?

Next, the group goes over to the flagpole to hear the rules from their teacher, Miss Farlie. She gives everyone a compass and a map, declares that every group has to check in at every meal, and there's also some kind of geology project the groups have to do. M.D. Spenser never explains it.

At lunch, Jane and Lindsay, or as I like to call them, Jane, hook up with their other four friends from before. There's some backstory, like how they met in preschool (except for Jaimie, who joined them in third grade. Classic Jaimie.) and how they always had sleep-over birthday parties. Gee, if only I had the littlest sense of any of their personalities. Seriously, coming up with a backstory in thirty seconds doesn't make it OK that M.D. Spenser didn't put any effort into these characters, or the main characters, or the teacher.

Well, anyway, Jane and Lindsay meet up with Molly and find the popular group making fun of them. So, in what might be described as the greatest prank ever pulled, the three of them throw pebbles into nearby bushes in order to scare them in broad daylight. This Machiavellian practical joke just needed one last touch to push it to perfection: Jane stepping on a twig. The popular kids scream and run away because M.D. Spenser doesn't know how children act.

Later, the team goes down one of the trails and happens across an abandoned mine, which is marked as off limits. You know there's plot point bells because there's nothing in this book that doesn't have some connection to the main conflict. Eventually, Jane goes off on her own and happens upon a writhing mass of snakes. Correct me if I'm wrong, but unless this is some kind of orgy, this doesn't occur in nature. You can tell the snakes were real because "these were no coat hangers. This was no trick." Anyway, Lindsay saves Jane again because she's too stupid to just go back the way she came. Courtney ran back to camp when she heard screaming, so it's back to square one.

Back at the camp, Courtney spills nail polish on their map, so there's nothing left to see except the path to the mine. Jane, taking the only logical option available to her, decides to go to said abandoned mine. She convinces the others, and I'm sorry but can I please point out how stupid this is? They go to some random Summer camp with their school and decide to go to one of the only places where they're specifically not allowed. Oh, and it's a freaking abandoned mine. This is not Scooby Doo, people die if they do that. It's just... this book. It's not thought out, none of this is thought out.

At dinner, Jane decides to introduce Molly to the rest of her friends. At first she was worried, but when Molly is immediately accepted she realized she had nothing to fear the whole time. Of course, because her friends are so... accepting? Kindhearted? Bitchy? They could be 40-year-old men and I wouldn't be surprised. Here, I'll make backstories and personalities for them: Carolyn is a very amiable young lady. She likes to spend her time searching her town for people and animals in danger. She has saved over two hundred cats from trees, and once pushed Jaimie in front of a truck just to save a puppy from being run over. It's just how nice she is. She doesn't tolerate bullies, and reluctantly hits them with bricks ever since she saw The Adventures of Sharkboy and Lavagirl when she was ten. If she worked in an office-building, she would probably win Employee of the Month.

Forced to spend the rest of her life in a wheelchair ever since The Accident, Jaimie was always considered a simple child. She most likely inherited this trait from her father, who always remarked that Jaimie was "not the sharpest tool in the chandelier." She suspected that she was really a genius, and once invented her very own secret language that she later discovered was already named "Pig-Latin." Jaimie's mind often wandered, and she once rode the bus so far past her original destination that she ended up in a place in which the inhabitants spoke Arabic. She learned the language within two hours of wondering around a marketplace, but then traded the remainder of her money for a t-shirt that said "انا مع غبي" or "I'm with stupid." Stranded and wearing a t-shirt four sizes too large, she returned home after four months of assisting the civilians in overthrowing their government.

Alyssa came to the U.S. from Canada, fleeing her country because she was caught stealing candy from babies. Alyssa was a notorious kleptomaniac, but also had a healthy dose of dark humor. Unfortunately, stealing candy from a baby proved to be very difficult, and seeing as how Alyssa did not have a healthy dose of ironic humor, she panicked and stole a bus, whose only resident was a strange little girl about her age. Not realizing that she would get more for car theft and kidnapping than she would for petty theft, she crossed the border after saying that no, she did not have any endangered animals with her. She was forced to sell her bus, forgetting to mention the girl inside, to a middle-aged man halfway across Montana. She then pulled off a series of bank robberies, moving toward wherever the hell the protagonist lives while blowing up national monuments to pull attention away from her burglar escapades.

Katie is really a forty-year-old man in disguise, forced to live undercover in fear of being found by a certain Libyan drug mob. After buying an ungodly amount of heroin, Katie, formerly known as "Deadbeat," drove from one end of Montana to the other in a mini, battery-powered car. His car was taken, however, after he refused to stop ramming into the side of an orphanage "for bonus points." Low on cash, self-esteem, and smack, Deadbeat bought a bus off some little girl, loaded the bus onto a boat, and essentially drove to Libya after hearing that his former drug dealer was awaiting a new shipment. Deadbeat, after realizing that he didn't speak the language and had no way to communicate with the sketchy criminals, stole as much heroin as he could carry after lighting the hair of one of said thugs. After injecting enough drugs to kill an adolescent elephant, he swam across the Atlantic Ocean, changed his name, and re-attended preschool.

That took, like, fifteen minutes, and it really wasn't that hard. Later that night, Jane and Lindsay are going to the bathroom when they hear scratching on the door. The discover that somebody etched "stay away from my m-" on the outhouse door. Jane realizes that the unfinished word was "mine," but is too stupid to care. Too bad she didn't have Alyssa with her, she would have stopped them. Regardless of the direct but unfinished warning received earlier, the group heads to the mine. When inside, the group follows a tunnel to a box of jewels, as well as a newspaper telling of a multimillion dollar robbery. Apparently, some dude murdered the people who previously owned the land before taking their jewel collection. So many holes in this story, but first: jewel collection?

Well, the group gets blocked in by a rockslide, and are forced to ride a mine-cart and hope that it leads to a way out. There are some ropes by the side of the tracks, and the girls grab on to them to stop the car before it goes off a cliff. But just when they are about to leave, a voice demands that they leave the treasure. So they do. Oh, but Courtney kept some, so Lindsay goes back to return it when she falls into a hole and is levitated to safety. 10/10. The end.

Insight into the Complex Minds of Characters:
This segment is not available because none of the characters think.

Beautiful Imagery:
"The noise sounded like a dog scratching on a door. It sounded like something sharp scraping against the outhouse door."

Hip References:
"From her oversized duffel bag she removed a portable CD player, a blow dryer, a hand-held video game..."

Conclusion: I've always sort of respected M.D. Spenser. I mean, he's a published writer and I haven't even finished a book yet. But this book changes everything. I could write this book easily, and I know that because when I was in second grade I wrote a story and it sounded a lot like this. Anybody could write this book as a child, a person born without fingers could have written this book as a child. M.D. Spenser probably took about an hour to write this, as there are only seven characters with dialogue, if you include the mom (in chapter 1) and the ghost (only in two chapters). The storyline is extremely uncreative, no effort was put into anything, it was terrible. The main character and her best friend perform actions that suggest no personality whatsoever, and say things like, "We can do it!" or "I know we can stop this!" They do things in such a way that it's practically impossible to be absorbed in the book. Without a doubt the worst book so far.
Posted by jonwg88 at 8:15 PM