Shivers 11: Guess Who's Coming For Dinner 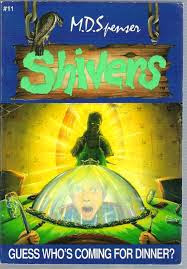 If I had to guess, I would say that little boy that starred in the Home Alone movies. Macaulay Culkin. Anyway, despite the undeniable creepiness of this novel's cover, it's actually not that at all scary. Still, there is some weird goodness that is kind of hard to explain, so I shan't.

Josh Jennings is a jock who is also totally smart! Wow, oxymoron much, M.D. Spencer? Josh is the school soccer star, which would make him totally popular in pretty much any country that's not the United States and apparently the United States too. Josh introduces us to this awkward kid named Michael Sturdevant. He's the school soccer chump, as well as being smart, shy, and overall weird.

The two hit it off when Josh catches Michael playing chess alone. Well, still better than World of Warcraft. Josh reveals that he likes chess, and even wants to buy a chess instructional CD ROM for his birthday, as well as a new calculator, a notepad, and a life. I mean, chess is fun and all, but he actually says that he mastered a bunch of opening strategies from a guide book. This is right on the border between sad and obsessive. Josh sits down with Michael and finds out that he's not that strange of a guy, since it would be difficult to make characters with different basic personalities.

Michael says that he sometimes plays with his little sister, Gladys, who is supposedly smart and evil. Josh also has a little sister, Megan, who is the younger sibling from all the other books with younger siblings, except even worse. Later, Josh is at his locker with his BFF's, Chet and Danny. They're like the three musketeers, if the three musketeers were complete tools. Also, how could M.D. Spencer make a new Danny if the old one was irreplaceable? I just included this part because Josh says that his locker-hidden treasures are his cleats and his Thomas Jefferson Middle School jersey. Because every kid's most prized possession is his middle school jersey.

Michael continually creams Josh at chess, and Josh also starts to get smarter. He even shows his math test to his parents, he's so proud. And then, the worst thing happens: Megan enters the picture. She is the brattiest human being I have ever read about. You know why? Because I can relate. That's right. When Josh shows off, she says, "Well, I got an A, not an A minus, in spelling. Does anybody care?" M.D. Spencer hits it spot on. That is literally my sister when she was very young, and it annoyed the crap out of me then and now. Therefore, I have taken it upon myself to create a passage describing my reaction to this dialogue, in standard Shivers format:

As my eyes fell upon the writing piece of Megan's cries for attention, my eyes grew as wide as giant teacups, the kind used to hold giant tea. My hands balled up into a fist like I was squeezing an invisible balloon that didn't pop or have any mass. My mouth dropped open like someone had pressed a button bought from a store that sold buttons to open my mouth. But soon, I won't even react to this Shivers book anymore.
Because I'll be done with this post.

I don't wanna toot my own horn here, but I personally think I hit the nail on the head. Anyway, the siblings discuss how weird the Sturdevant siblings are while eating dinner. A girl named Bessie Butler was friends with Gladys, but Bessie mysteriously disappeared. With a name like Bessie Butler, she probably got herself a nice farm in the countryside or ran off to become a country singer.

The next day, Josh is super excited to play chess. His new dream is to have his sister's friend, Heidi, who always sasses and outsmarts him, to admit that he was better than her and that she was just jealous of his brains. The fact that he has these kinds of fantasies about his nine-year-old sister's nine-year-old friend is a little strange to say the least. But then the unthinkable happens. Two worlds collide when Chet and Danny meet Michael, and Gladys meets all of them. Gladys is a little chubby girl in pigtails about Megan's age that I imagine Josh immediately falls in love with. She screams at Michael for eating a cupcake, then runs off, like she's a member of the goddamn cupcake police.

Michael goes to Josh's house after school for pizza, and Josh keeps them occupied by turning on the tennis finals because "it's better than nothing." That's actually a pretty good remark, but it was incorrect. Swing and a miss, M.D. Spencer. Michael leans in to tell Josh something really important, that his family's meals are unconventional to say the least, but his mom bursts in before too much can be said. At school, Michael needs Josh to keep their teacher, Wicked Ms. Warner, away from his house so that his family can't eat her. If you realized they were cannibals before, then congratulations, you can read. Josh agrees.

Chet, Danny, and Josh sneak up to Ms. Warner's window to have Gladys's boot thrown through it at them. They dodge, and Warner pretends it never happened, even though windows are scarce in today's economy. The three of them try to ask Warner for help, but she is dragged away by the whole family, who drives her away in their black van. That night, Josh's mom asks Josh to stay at Michael's house while she goes away on business. If I had children, I think I would also choose the notoriously strange family with the mysterious past to have my children overnight, because they either do something weird and you get to sue them or you get free babysitting out of it. It's a win-win.

The next day, Michael asks Josh to help rescue Ms. Warner, who is alive but locked up. As they prepare to go to Michael's house, Megan and Heidi reveal that they have to go too. The foursome get to the ominous, foreboding house that they really don't have to go to but they do anyway because why not?, and the two girls go missing. As they search the house, Josh sees posters of the kids that disappeared, including Bessie. With her potential for becoming a country singer, maybe it was a mercy to the rest of the world. In the kitchen, he sees his own photo that was taken when he knew Michael and before he met the rest of the Brady Bunch.

He runs outside to a stone cottage and finds Heidi hiding there. He runs down the stairs to find Michael freeing Wicked Warner from a cage with Megan, and the five of them start to run when Gladys's boot hits Josh's head and he blacks out and...

In a Twist Ending that I Really Just do not Know how to Explain...
Josh wakes up and they walk away from the house. They had trapped Gladys in the cage, and Heidi admitted that she was always jealous of Josh's chess skills so this is either a touching moment or a wet dream. But then, the mom calls out that it's time for dinner. So, I guess, Michael got them all together so they could be eaten or something. I don't know.

Insight into the Complex Minds of Character:
"Now he had a new fantasy: Heidi would admit that she always thought Josh was brilliant, and that she'd acted like a ninny because she was jealous. All she had ever really wanted in this world was to learn chess from the great grand master, Joshua Jennings, who could wallop even the most intelligent computer in the world..." Pretty weird.

Beautiful Imagery:
"They were like dog-kicking boots, or boots some jail warden might wear to keep her inmates in line." And I thought I was the only one that had special boots just for dog-kicking.

Hip References:
"Since when do I have to fax you guys my schedule every day?"
I've compiled a list of devices more topical than fax machines: texts, voicemail, email, mail, carrier pigeon, horseback messenger, messages given by morse code using vocal sounds or a flashlight, hieroglyphs.

Conclusion: Weirdest one yet, because I really don't know if I like it. I mean, It's obviously not one of the best so far, but it doesn't seem bad, and I really just can't tell because the ending is a let-down, and the characters are eh but the plot is not bad and I'll just say:
It's O.K.
Posted by jonwg88 at 1:24 AM