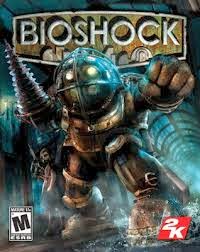 Hey guys, guess what, I'm reviewing a video game this time! I finished this sometime this week and loved it so much that I just had to do a review, and it has nothing to do with the fact that I'm out in the desert right now and don't have any books. Anyway, let's dive in!

So you start out on a plane, reading a note whose contents are not shown. If you can't tell, it's pretty important later. Well, that plane crashes, and you're the only survivor. Oh, and the main character's name is Jack, by the way. Well, you swim yourself to safety at a nearby floating lighthouse. Thank God the government decided to put all those floating lighthouses in the middle of the ocean, during Bush's term I believe.

If you haven't figured it out, this is a first-person shooter. The graphics are stunning, the atmosphere is effectively terrifying, and the storyline is rich and unbelievably gnarly. I have to admit, though, that it is a really difficult game. For example, despite the fact that I played on "normal" mode, I constantly ran out of ammo. I will, however, put the blame on myself for that one, cause I totally didn't use enough Plasmids early on...

Oh right, the plot. So, inside the lighthouse there's a bathysphere (a spherical submarine). You walk inside, sit down, get comfortable, and then it's like you were strapped into "Lex Luthor's Drop of Doom." You sink down into the undersea city of Rapture, the game's setting.

The first thing you see, of course, is a psychopath with hook-like daggers who threatens to kill you with very colorful language. And they say Americans are rude. Well, things look grim until a guy named Atlas starts talking to you through a radio in your bathysphere. He helps you out by flashing a spotlight on the enemy, scaring him away. Now that's what I call shining some light on the situation. So, Atlas agrees to help you survive in exchange for your help in rescuing his family, who is on the run. Andrew Ryan, the founder of Rapture, is the only thing standing in your way. He's a crazy, ambitious, and crazy ambitious son-of-a-bitch, and he is determined to stop you at all costs. Just to give you some insight as to his character, here's a quote: "It was never impossible to build Rapture underwater. It was impossible to build it anywhere else."

One line, one line like that from M.D. Spenser and I would take away my whole "Insight into the Complex Minds of Characters" bit. Also, when I said that Andrew Ryan and his army of higher-ups are the only things standing in your way... I lied. See, the main enemies are called Splicers. That weirdo with the hook daggers was just one type.


Basically, Splicers are what's left of humanity in Rapture after the civil war. Their minds and bodies were deformed as a result of a drug called ADAM, a substance that makes you stronger, faster, better, gives you amazing power, but apparently doesn't know the value of beauty sleep, cause that is one ugly bastard. ADAM eventually sustains the user's mental and physical health, so the more they take, the saner they are. Obviously, it's very rare.

From ADAM comes EVE, a chemical used to power superpowers called Plasmids, stuff like telekinesis, fire, lightning, the ability to spawn a can of whoop-ass, etc. Basically, although it will seem attractive to just shoot the Splicers, you're gonna wanna use Plasmids as much as possible to conserve ammo, which is scarce later on. Luckily, you always have your trusty wrench, so if you're in a pinch and need some ammo, you can give your foe a slight headache before being ripped to shreds. Anyway, Atlas eventually leads you to a room where you see, through a window, a gruesome murder.

So, there's something I have to explain first. ADAM is farmed by infecting little girls with a special kind of sea slug, whose stem cells are a key ingredient of ADAM. These little girls, called Little Sisters, go around with their creepy yellow eyes and giant syringes that are freaking bigger than they are, and they stab people in order to extract blood, which they then eat and make into ADAM.
They're hunted by everybody for their ADAM, so they are assigned these giant robots called Big Daddies (the guy on the cover).

Well, the murder happens when some guy grabs one of the Little Sisters right before a Big Daddy comes in, sticks his drill hand in the guy's chest, and goes crazy. Now that's what I call takin' him out for a spin. Oh, and as a side-note, I would like to apologize for the puns. It's 2:30 a.m.

Later you meet Tenenbaum, the creator of the Little Sisters. She gives you a Plasmid that lets you turn Little Sisters back into sane, non-murderous little girls. Sounds great, right? Unfortunately, you can't change them until their Big Daddies are killed. So you have to kill them. The Big Daddies. The giant drill robots. Fighting them sucks, and it requires a lot of strategy so you don't run out of ammo. One time I tricked two into fighting each other. It was cool.

You also have the option to harvest the Little Sisters. You get more ADAM, but the Little Sisters die in the process. I have never tried it. It just couldn't bring myself to do it. I mean, just look at that girl's cute little face... like that of an angel. I mean, you get presents for not killing them, and I just didn't see the point. In the end, I learned I made the right decision, so it all worked out.

Well, the game is basically running around Rapture, finding more secrets, learning the backstory, discovering how characters fit together. There's Dr. Suchong, who helped create the Little Sisters and single-handedly created the Big Daddy. He sucks. Luckily, he's dead when you arrive, so it's OK. And there's J.S. Steinman, the insane, asymmetry-obsessed plastic surgeon. That medical pavilion was the scariest place of my life. Human experiments and freaks of nature everywhere. There's the botanical gardens where you meet... the botanist, Julie Langford. There's Pablo Navarro, expert hacker and rebel during the civil war. There's Frank Fontaine, drug smuggler and Andrew Ryan's rival, and Sander Cohen, crazy, bipolar artist that I couldn't wait to fight. And, of course, there's Tenenbaum, Atlas, and Andrew Ryan himself. And there's you.

The politics are deeply intriguing, the pasts of all the characters are checkered at best, and everything about it is totally edge-of-your-seat. Like, you'll walk down some stairs and hear some guy singing a creepy religious song behind you, you'll see shadows on the wall of a woman leaning over a stroller and hear a crying baby, but when you turn the corner there's just a plain stroller and laughter from behind you. And, of course, there's the cry of the Big Daddy, like a majestic whale siren: Waaaaaaaahooooooggaaaaaa. That should be under "Beautiful Imagery."

There are a few problems with the game, of course. For one, it is way too easy to run out of ammo if you're not careful. Even on normal mode, I ran out a few times, and the melee weapon sucks, so you're basically running at your enemy and hitting them until they die, no matter how many times you die. Oh, and the whole "low health, easy resurrection" thing... I don't know if I like that. You do have very low health, but when you die you come back in these things called Vita-chambers, and your enemies don't regain health, so the system, depending on what they were going for, might be a little flawed, though it certainly did help with the lack of ammo.

Oh, but the end... When you reach Andrew Ryan, all hell breaks loose, shit hits the fan, the wind rises, it runs right off the rails and into the gnarliest twist this side of Shutter Island. I can't ruin it, because ruining the ending to a Bioshock video game is unforgivable. It's in the constitution as "cruel and unusual punishment," the Geneva Convention as "crimes against humanity," and it's just a dick move. Seriously, if you lit every puppy in the world on fire, and every puppy-owning child on fire, it would still not be as bad as ruining a Bioshock twist. So please, I beg of you, don't look it up, just play the game. Trust me, it's all worth the experience. I know you won't regret it, but be warned: there are multiple endings, and if you save the Little Sisters instead of killing them, you will be much happier.

Conclusion: My favorite video game series to date.
Posted by jonwg88 at 3:01 AM