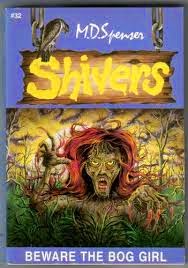 Well, it's been a week since I reviewed a Shivers book, but from what I can remember, this might just be the weirdest. For one, the main character has quite a few run-ins with a tangible (and dangerous) threat multiple times throughout the book, much like in Shriek Home Chicago and A Ghostly Playmate, which automatically bumps the book up a few notches. Also, because the book takes place on an island right off the coast of South Carolina, the majority of the side characters are black. Overall, I'm pretty sure this book has more minorities than all the other books put together, so that's fun.

This may be the worst character introduction ever, since the book literally opens to Julie (the protagonist) hanging her head out the car window. And then Julie reveals that she's not supposed to, it's just "too fun not to do." Yeah, it's like a freakin' roller coaster. I can tell this character's going to be loads of fun.

So Julie Daniels and her dad, Steve, are going to Mossland Island on some science expedition. At the end of the car ride, Julie sees what she thinks are ghosts in the trees, which is relevant later so remember that. When they finally get to the house they rented, the reader finds out that it's a giant, old mansion. Julie decides to explore, eventually finding a giant bedroom that seemed to belong to a little girl. So, it's pink and has mirrors and tea sets and stuff. Thankfully, the protagonist is the type that makes jokes out loud while she's alone, so reading about her going through the clothes and saying things like, "Oh, let's take the horse and carriage out for a ride" and "This was an adventure already!" is a real treat. Thankfully, there's some ghostly moaning and footprints or something and the protagonist leaves.

I have bad news, you guys: I don't like this protagonist. I have a rule of literature that if a character says the word "neat-o" sincerely more than zero times, he/she automatically sucks. Unfortunately, Julie uses that word at least once, in a non-ironic/sarcastic fashion, so she can't be considered a good character. To prove my point, Julie decides to sleep in the only room in their mansion that has muddy footprints leading up to the window. At this point, she deserves to be haunted, the ghost has literally warned her. As Julie's falling asleep, the ghost tells her to get out and that she can't just waltz in like she owns the place, and Julie dismisses it as a dream. I cannot stress this enough, the signs are in no way subtle, she has had at least three good chances to say, "you know what, this room is haunted, I think I'm gonna sleep in a different one to avoid an angry spirit's retribution."

Here's where it gets good, though. The family goes to town, where Julie meets a girl her age named Lucy. Crazy enough, she's black and also one of the two main characters. Pretty much everyone in this town is black, actually, which is pretty cool considering the fact that nearly every character up to this point in the series was white. But the really crazy part is that these natives aren't just African-American; they're Gullah. Apparently, the Gullahs are a group of slave descendants with an english-based language with some African loanwords. It actually sounds pretty ridiculous. Anyway, I looked it up and it turns out that it's a real thing. Huh, I guess Shivers can teach you relevant information. Who knew.

Anyway, Julie and Lucy decide to hang out at the mansion, when Lucy reveals information that comes as quite a shock to the protagonist but no one else: the house is haunted. It turns out that the house was owned by the super-rich Habersham family. The youngest daughter, Eugenie, ruled the house. One day, she threw a fit and ran out into the swamp and was never seen again. Now she's a ghost known as the Bog Girl. That's pretty standard, but you know what isn't? The last line of the back-of-the-book summary is "NEVER WASH YOUR HAIR WITH SWAMP WATER!"which is really bad, even for a Shivers book. Julie decides that she wants to be the one to kill the Bog Girl, and Lucy agrees to take her to the swamp.

Yes, because fighting the Bog Girl at the swamp is a flawless plan that couldn't possibly go wrong. When they get there, a mouth forms in the swamp mud and almost eats Julie. Lucy saves her, and I'm just gonna put it out there that Lucy literally saves her, like, a billion times. You know how I always say that characters are so stupid that they shouldn't survive the process of everyday life, much less whatever they go through in the book? Well, here you go; without Lucy, Julie would be dead at least twelve times.

After they escape, the two girls decide to visit Lucy's aunt, Victoria, who is a medicine woman and old enough to have known Eugenie. Victoria believes them, but says that she can't make a potion or whatever unless she knows what the Bog Girl looks like. How come every time the protagonists consult an adult, they get no help? It's as if conflicts in these books aren't allowed to involve sensible people.

The girls ride their bikes back to the Habersham house, where Julie proposes that they go for a swim. Lucy then rips off her shirt to reveal a bathing suit, which I thought I'd mention because that meant that she had been wearing the swimsuit under her clothes for the whole day on the off-chance that Julie would want to swim.

That night, Julie decides to host a tea party with Eugenie's stuff to lure her out. Lucy and Julie do that, and it works, the Bog Girl breaks in and tries to kill Julie. She looks like the picture on the cover, in case you were curious. Julie decides that there haven't been enough The Wizard of Oz references in this stupid series and splashes water on the evil girl. Her arm melts off, but then she grows a new one so that plan worked out exactly as I expected it to. The Bog Girl tries to choke Julie when- and I promise that this will surprise nobody- Lucy saves her. By taking her tea set hostage. The Bog Girl leaves just in time for Dad to walk in and see the ruined room. He gets pissed, and then Lucy gets pissed because Julie dragged her into all this, and at this point even the other characters hate Julie.

So Julie does what any protagonist would logically do, and tries to take on the antagonist by herself. She insults the Bog Girl before biking away, hoping to dry her out. It works, and the Bog Girl starts to crack. Oh, and then it starts raining. Even nature hates Julie. The Bog Girl shoves Julie to the ground and starts to choke her to death when Lucy hits the Bog Girl and saves Julie's life. But of course, I don't know what I expected.

The two of them go to Aunt Victoria's house, where they go through her potion recipes. There are cures for toothaches, colic, and crying babies (hopefully to make them temporarily stop crying), but no Bog Girl. So, they check the Aunt's journal, where they find a section titled "Tamin' da spirit dat fuh wander," or "Taming the restless spirit." It's so weird, I would think that that's racist if Gullah wasn't a thing. Anyway, the group finds a Bog Girl trap, and they set it up near the swamp. But because they forgot a key ingredient, which (straight from the book) is "pain," the trap doesn't work. The pair takes Lucy's canoe out to the swamp, a plan that Jonathan Golden rates 11/5.

The Bog Girl climbs up on the canoe, so Lucy, and only Lucy, dries Eugenie up with the canoe motor. They bring their gnarled enemy out to the middle of a road and break her into little pieces. At the end of the summer, Julie and her dad are driving to the airport in the rain when the mud starts to form a shape and Julie yells for her dad to go faster, there's a ghost.

Insight into the Complex Minds of Characters:
One "neat-o" is all it took.

Beautiful Imagery:
"The sun was still blazing like a trusty friend."

As [sic] as it Gets:
"These antiques are not be disturbed."

Conclusion:
I don't know, I like the fact that they fight the Bog Girl multiple times throughout the book, it helps me develop some sort of feelings for the antagonistic force. The main character was pretty annoying, but it wasn't noticeable enough to noticeably diminish the quality of the overall book. Unlike in most books, quite a bit happens, so that's good. One thing that I love is how Julie points out the ghost in the beginning and end of the book in the same way, it makes it feel connected and... planned, I guess. I can't explain it very well, but I like it. So, all in all, the book is pretty good.
Posted by jonwg88 at 3:37 AM