Shivers 36: Madness at the Mall 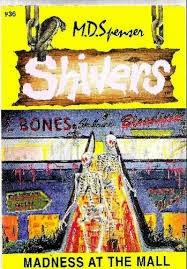 So we're finally here. The end of our first major series. I've... I don't really know how to do this post, I've been doing this for so long that I guess I've almost developed a dependency on Shivers. It's easy to be funny provided the right material, and I suppose that's really where my initial attachment stemmed from. But then I found the good books, and even despite the bad I sort of grew attached to the series as a whole. I wrote my retrospective on the quality of the average Shivers book on my review of Terror on Tomahawk Island, but that doesn't really capture my feelings toward this series as a whole. So, I guess I'll include an extra conclusion at the end for the whole Shivers lineup.

So this book starts out in with an interesting change: the character has a love interest and a relationship with said interest that goes beyond pitying the protagonist. In the very beginning, and I mean five pages in, main character Frank Chase has a planned date with the pretty Deanna Fields. And it actually happens- yeah, no pesky super strength, overly-sexually active bullies, or getting the role of a beloved dog icon in a play standing in this couple's way.

Unfortunately,  seven pages in Frank has been told that he didn't complete his science project on time and has to get a paper signed by his parents. Thirteen pages in, his mom cancels the date. Fun plot progression, you almost kept my attention. But I guess I'll start over. Much like in the first few books, the Chase family is moving out of their element and to the brutal and unforgiving land of Southern California. There's also some rumor that the local mall at which Frank and Deanna are seeing the movie  for their date is haunted, but that doesn't matter because nothing in this book makes sense at all. Fast-forwarding a little, Frank is now grounded and has to babysit his brother Tom for the night. Sorry I've been going through the plot in such a convoluted way, I've been reading "Homestuck" and I think the storytelling style is growing on me.

Anyway, Tom tells Frank that the mall is haunted because it was built on a pet cemetery. Do those really exist? I've never seen a pet cemetery. I thought Steven King just made it up. Anyway, after the parents leave and Tom stops playing his favorite video game, the nonexistent Animal Pursuit, Frank bribes his brother to go to the movies with him. I feel like if there has been one lesson to take from this series, it's not to play survival-based computer games with "animal" in the title. That, and that there's no need to be scared of ghosts as long as you have the intelligence of a brick.

After the movie is over, the theater starts to shake and everybody immediately sprints toward the exit, including Deanna. Frank leads Tom to the emergency exit, which gives way to a long, dark hallway. As you all know by now, Shivers law dictates that the protagonists must walk down every hallway they come across as long as it's long and dark. Common sense is strictly forbidden. Eventually, they reach the end of the hallway, where they find an unmovable door. So, I guess this begs the question: what happens when an unmovable object meets easily defeated children? The door wins, the door will always win. But bad jokes aside, something extraordinary happens in this scene: I felt empathy for a character. Usually, I feel apathy, or in extreme cases such as Samantha "Spooky's," antipathy. But rarely empathy. Tom starts whining, so Frank says, "We'll get out of here OK, but you have to stop whining. Can you do that?" it's like something I'd have said to one of my siblings when I was a kid. I probably did at some point. You know what, now that I think about it, the whole sibling dynamic is pretty relatable.

So they double back and walk to the emergency exit, which has no handle and says "no access." They then walk down a different, very curvy hallway. That actually sounds terrifying, can you imagine walking down a dimly-lit hallway lined with "no access" doors? I shudder at the thought. Moving on, they eventually find a door... into the mall. I'm not even sure how that's possible, but OK. Anyway, the mall is empty and all the metal doors are down. I actually like the setting, an empty mall is a good place for a spooky story. Well, better than an apple orchard or an arcade in New Jersey, anyway.

Speaking of arcades, all the games in the mall arcade are not only on but seem to be being played. All of a sudden, the metal gates go up. Until they get to the front gate, at which point the gate shuts closed. Ha. Fortunately (and unexpectedly), the protagonists decide to do something genuinely clever: raid the candy store. Oh, and on the way there there's this really cool scene where the kids see a colorful fountain and it's super beautiful so they throw a penny in and the "water" eats clean through it. It's great.

They grab some candy before hearing footsteps from upstairs. They run up the escalator, which speeds up to try to shred their feet, and ends up destroying Tom's shoes. The brothers steal new shoes for Tom when Frank's finger is bitten by something small and furry. They then walk over to the computer store, where Frank dials 9-1-1 and the phone hangs up and the words "9-1-1 can't help you now" repeat on all the computers. This is one of my favorite parts in any Shivers book; It's not super dark, it's not funny, it's just good, old-fashioned scary. This is what Shivers needed more of: tame but frightening scenes.

So Frank sends their dad an email, and here's where the plot gets a little shark-jump-y. A game of Animal Pursuit shows up on the computer screen. It basically portrays the fact that there are a bunch of animals trying to kill them, and shows where the animals are. So, they hatch a plan: Tom will watch the screen and walkie talkie Frank the animals' locations. They do that, then Tom decides that the plot hasn't gotten ridiculous enough and starts moving Frank with the computer. They call 9-1-1, and then they meet up and get locked out of the computer room. They decide to run to the front of the mall. Frank stabs a cat with a pair of scissors, it gets pretty crazy. There's no blood, though.

Eventually, the brothers make it and their dad comes in to save them with a couple of police officers. Frank decides to keep the adventure to himself when he realizes the scissors are covered in blood.

Insight into the Complex Minds of Characters:
"He was so relieved he wanted to throw up or pee or sleep or something."

Beautiful Imagery:
"Next he felt himself jerked upward as, beneath his feet, clattered hamsters with claws as sharp as knives."

On Pet Cemeteries and Semataries:
I looked it up and they exist, at least in Los Angeles. I feel like I shouldn't be surprised, Los Angeles is pretty weird about pets. You know they have pet hotels here? Also, who wants me to review Steven King's Pet Sematary? That would be fun.

Conclusion: Not the best book in the series, but I like it. Frank's personality is actually pretty unique, he has a deadpan vibe to him and he actually does some pretty clever stuff, I enjoyed reading about him. While the plot does take a serious Lost-esque dive, it is genuinely suspenseful and kinda spooky at times. Of course, the threat gets pretty lame once they figure out it's a bunch of undead animals, but for the majority of the book creepy things happen and the reader has no idea why, and that's just how I like it. Plus, no chapter foreshadowing endings. All told, M.D. Spenser finished off his series with an above average book.

Series Conclusion: Actually, I've been emailing back and forth with my friend Ian and he made some amazing points about the series, which he's also been reading. This is basically what he said, and I agree with it wholeheartedly. This was certainly an interesting series of children's horror books. The majority of book were uneventful and underwhelming, with overly-tame stories and happy endings that bring the books to happily-ever-after conclusions so similar that you can predict them after learning the characters' names. The characters themselves suffer from cardboard-cutout personalities and there are excruciatingly painful chapter endings, and there are precious few books that are actually scary, even by child standards. Yet despite all this, there's something magical about these books. M.D. Spenser was never meant to write children's horror, though he is, at heart, a children's writer. And a journalist. Many of the books seem lazy, most likely because M.D. Spenser hopped on the novel-writing train during the 90's, the golden age of adolescent horror. He saw a fad and decided to take advantage, but he wasn't passionate most of the time. But there are treasures, books like Weirdo Waldo's Wax Museum and A Ghostly Playmate, books that express not only passion but serious morals and lessons and, above all, quality. This series is the oddest children's horror series out there, memorable for short bursts of darkness not befitting of books for kids, strange sexual innuendos, and the occasional moment so well-written and creative that you will rarely find anything like it in any other series in the genre. In conclusion, I wouldn't recommend the series to actual kids, but I'll be damned if it doesn't have its moments, few they may be. Not good, exactly, overall, but certainly memorable.
Posted by jonwg88 at 2:39 PM