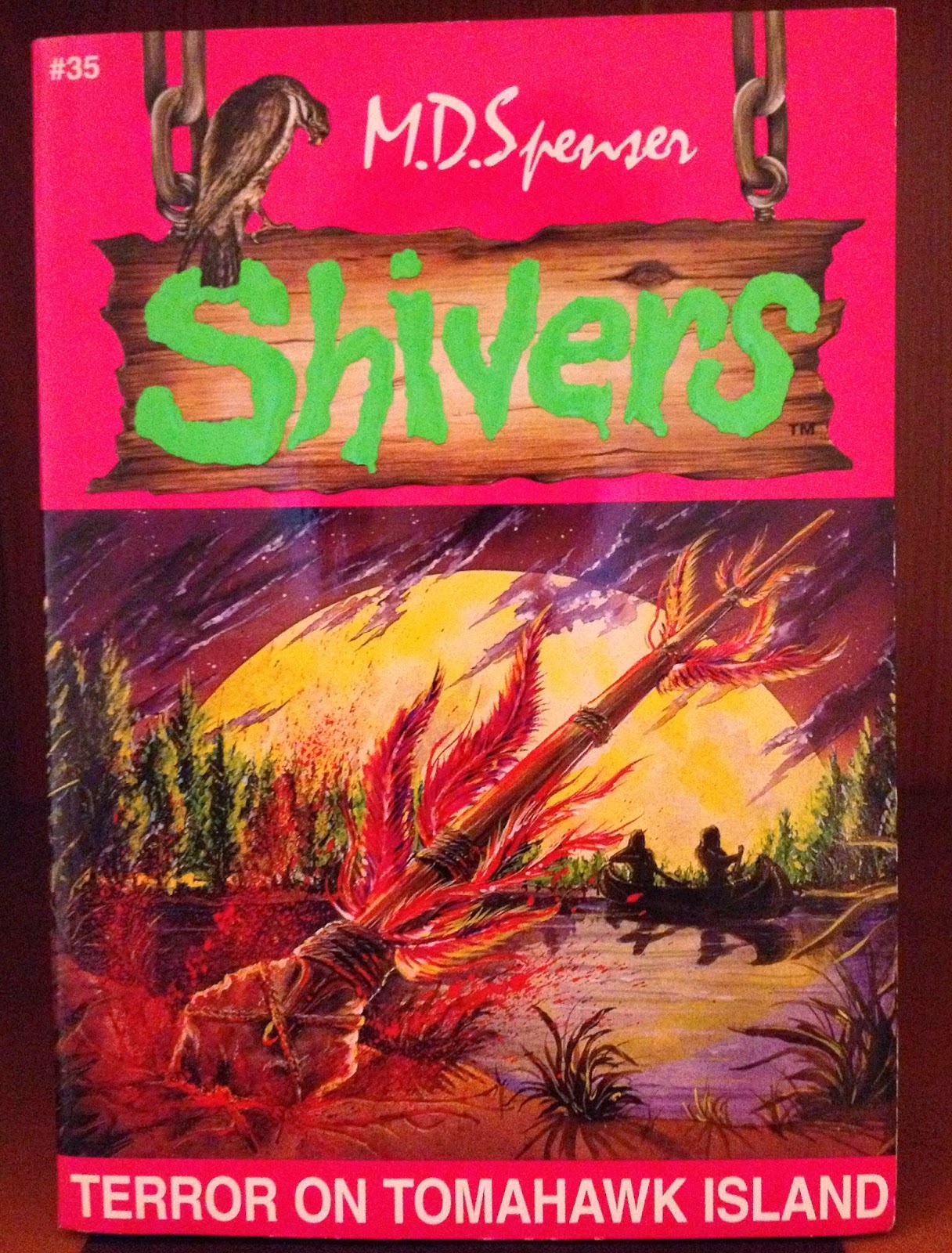 Not to be confused with Terror on Troll Mountain, though I can see how one could confuse them seeing as how they are both bad. This book is the average Shivers book, and it contains every fault and as much of the formula as every other generic Shivers book. Ghost Writer, The Mystic's Spell, The Haunting House, and The Forgotten Farmhouse are like the Shivers books, and they have every bad quality this series is, at least on this blog, infamous for. Now don't get me wrong; there are good Shivers books, such as A Ghostly Playmate and Shriek Home Chicago, which are treasures, for Shivers books; but you also have Weirdo Waldo's Wax Museum and Creepy Clothes, which are actually great books for their genre. And then you have your Camp Fear and  The Terrible Terror Book-type books, which not only suffer from classic Shivers flaws but also are abominations.

That being said, a Shivers book can suffer from being written in the same basic way as the majority and still have enough redeeming qualities to save it. The Awful Apple Orchard is a minor step above the average Shivers book because of its ending, which is the best in the series. I think Your Momma's a Werewolf was a pretty good one, and I know it was pretty Shivers-y. To be honest, there weren't many, but it is possible. Hell, Shriek Home Chicago has all the normal faults, and it's one of my favorites. So there are some that transcend their curse, but Terror on Tomahawk Island isn't one of them. This is what inspires this special edition post:

Hello, my name is Jonathan Golden, and I'll be instructing you as to how to make your average Shivers book, so one day you can write your own! Pay close attention to the examples, as these are all straight out of Terror on Tomahawk Island.

Step 1:
Make a protagonist, it doesn't matter which gender, as long as he/she is twelve-thirteen.
Ex. "My name is Sean. I'm thirteen."

Step 2:
Create sibling, preferably younger and of the opposite gender, though exceptions are allowed. Then have protagonist insist that sibling is OK.
Ex. "My sister's name is Wendy. She's only twelve. Wendy is OK, for a sister. By "OK" I mean that usually I can put up with her. She's not dumb or anything like that, but she's a girl. And girls can be annoying."
As you can see, the classier the better.

Step 3:
From the first chapter on to the conflict, which should be introduced at least halfway through the book, there should be at least one foreshadowing and/or misleading cliffhanger. Use blatant lies sparingly, as you may be called out.
Ex. Chapter 1: "Just thinking about it now –– how close we both came to being dead –– gives me the shivers*."
Chapter 2: "And that's what nearly got Wendy and me killed."
Chapter 3: "You can bet we wouldn't have said that if we'd known where we were going to be exactly twenty-four hours later!"
Chapter 4: "And we were doomed."
And so on.
*Side note: include the word "shivers" in each book at least five times.

Step 4:
Include uninteresting storyline that really shouldn't take up at least half the book but somehow does. Must be uninteresting.
Ex. Sean and Wendy are staying at Lake Wakanaga on vacation when their parents decide to go shopping, leaving them home alone. The siblings are really bored and discuss activities for a while. They eventually decide to explore the creepy island in the middle of the lake, which makes sense considering all the other fun activities they could be doing. They rent a rowboat from the creepy Mr. Booth and his borderline psychopathic son, who are  infamous for bad-quality rowboats, and paddle out to the island.

Because this book wouldn't be classic Shivers if the protagonists broke their stupid-streak, the siblings then fall asleep, waking up to a storm (which they knew was coming) and a nearly-sunken boat. They row to Tomahawk Island, where they walk on a gravel beach, see a path through the woods, eat some berries, it's pretty boring. Oh, and to put it in perspective, this took up 52 pages. I don't know how, it seems impossible in retrospect considering the amount of detail, but there you are.

Step 5:
Create a conflict. It must be simple. Like, a-story-written-at-a-first-grade-writing-daycamp-that-you-thought-might-be-cool-because-you-like-writing-and-the-girl-you-liked-was-going-but-it-was-actually-excrutiatingly-boring simple. Gosh, this brings back memories. Anyway, it should have so little depth that it's practically see-through, and it should happen in the span of about a day.
Ex. The siblings fall asleep under a tree, woken up shortly after by ghost Indians (Native Americans?) sailing up in canoes. Now, I know what you may be thinking, but get a load of this: "They were going to capture us and torture us and kill us. In an instant, I knew all this was true." A little presumptuous, though, right? Usually, when I see Native Americans, I don't assume that they want to torture and kill me, because I'm white so in this country that's basically a death sentence.

The Native Americans disappear, covertly capturing Wendy while Sean isn't looking. Sean decides to follow them down the forest trail before coming to their camp. He sees Wendy in a cage and comes up with a genius plan: poke her. She screams, revealing Sean's presence. Please read Step 6 before proceeding.

The Native Americans hold Sean upside down and pull him so that his arm is cut by the inside of the cage. So... I guess they did want to torture them. Look, I get it, I've read The Son, but I feel like this is just a little racist. Two books with Native Americans and the first is straight out of The Lone Ranger while the second is a barbaric group. Anyway, they eventually throw Sean into the cage, where he chews through the wood (I'm serious, this happens, read the book if you don't believe me).

It works. The siblings sneak to the beach, where they plug up a hole in their boat with bubblegum and row to safety.

Step 6:
Have at least one of the two major characters make staggeringly stupid decisions.

Step 7:
The ending must be tacky. The tackier, the better, and it's fine if it makes no sense.
Ex. the Native Americans are all watching them from the beach, saluting them as they leave.

Step 8 (Optional):
Mention that there was some myth about it all along.
Ex. They say that the Wakanaga Indians were either slaughtered there and returning for revenge, or were kind to the settlers and just want to visit. It shouldn't be that hard to verify one of them.

Hope you enjoyed our Shivers creation guide! Use caution, as being too good or bad of a writer defies the purpose of being a Shivers author; and remember, it's not about quality, it's about including the negatives.

Insight into the Complex Minds of Characters:
"I thought about Clint Eastwood. Clint, I knew, would follow the trail."

Beautiful Imagery:
"The knot was just as tight as it had been. They must have tied it in some secret Indian way or something like that."

Oh, I Get it, Irony:
The white people stole their land, so the Indians get their ghostly revenge by locking a couple of kids in a crappy wooden cage. Very clever, M.D. Spenser

Conclusion:
I guess this post served as a retrospective on the series more than anything else, but I was trying to prove a point: this book is bad, but it's also as bad as many other books in the series because they all share many of the same qualities, and they're generally bad qualities. This book, along with all the others like it, seemed forced, because I don't think M.D. Spenser wrote this because he wanted to, he did it because it was his job. So, in conclusion, I didn't like it.
Posted by jonwg88 at 3:31 AM