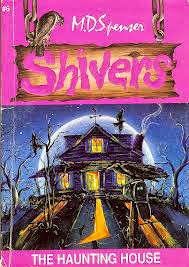 So, can you guess what this book's protagonist is doing in the beginning of the book? I'll give you a hint: it's Mr. Spencer's favorite activity. Spoiler alert: she's moving.

That's right, gang, this book starts out the way every other book does. I feel like I don't even need to include that anymore. But anyway, I'll start off by saying that this one, despite the terrible title, is actually a pretty good book. As Shivers book go. Only problem was, in terms of criticism, this book gave me an automatic weapon and then threw bullets at me so fast my head might spin while writing this.

So the reason that this book is O.K. is mostly because of the characters, but also because it's reasonably scary. These lovable opposites, Caitlin and Lynne, are just about as different as two sisters can be! Caitlin is wimpy, girly, quick-thinking, and fat. Lynne is tough, skinny, a bit slow-minded, and phat. These two lil' troublemakers are moving for their dad's new job. He's a scientist. The mom is in there too, but I assume that she doesn't have a job. This family is moving into a big, old, creepy house. Some might even say that the house was spooky, uncanny, sinister, unearthly, scary, frightening, spine tingling, or maybe even... haunting!

So Caitlin, the twelve-year-old older sister to nine-year-old Lynne, is the narrator for this hair-raising roller-coaster, and she says something that connects to the reader. Go ahead, read that again. It's true, though, she complains about her parents saying hip words to sound "cool". And I can sympathize! My jaw literally dropped to the floor (that sounds like a line out of a Shivers book), but looks like ol' Spencer really did pull out the stops. Let's see what comes next.

So Cait and Lynne start acting like the jovial Even Steven and Odd Todd that they are, when suddenly they notice a gaping hole in the backyard. Right behind the house. Looks like the previous owners left in a holely. Get it, instead of hurry.

O.K, before we continue, I'm going to take a pledge, right here and now. Last post, I went out of control. There were puns everywhere, I was forced to see a psychiatrist for six days because I wouldn't stop making "punny" jokes, so I promise that this will be the single last pun that will be entered in to this post. The last pun. Now I will continue.

So Lynne tricks Cait into going into the hole, where the two of them wrestle it out. See, the characters may seem cliché and stupid, but I kinda like the whole opposite thing, with each character having actual strengths and weaknesses instead of acting the same way at every obstacle with the help of their idiot prankster siblings. So all of a sudden, the giant dirt pile that is obviously left next to the hole mysteriously collapses in on them after Lynne says that she hated the house, and Lynne saves them both with her strength and reflexes.

After that, team Hot and Cold decide to hightail it back into the house, where Caitlin goes exploring. She discovers that the house feels... wrong, and she finds footsteps in the dining room. She follows them, and discovers that it's... Lynne, who wore her big fuzzy slippers. Caitlin yells at her for wearing slippers, though it's more because she got frightened then the actual crime: against fashion. So anyway, Caitlin is mean to her little sister over absolutely nothing, and claims that she's the cause of everything that goes wrong with the family. Lynne shakes it off and goes to make the two of them sandwiches when the drawer mysteriously slams on her finger.

Caitlin tells Lynne that she accidentally did it, but Caitlin thinks that the force at work here might be even worse than clumsiness. Drawer-Shutting Gremlins! Then Caitlin goes upstairs to discover something even more terrifying: her window is open and her clothes are repacked! Now I'm no detective, but what I can deduce, this is your typical maid ghost who left too much uncleaned, and now annoyingly packs up your stuff, closes your drawers, enjoys the cold, and passes the vacuum when you're just trying to read a good book. This might be the most terrifying book yet.

So Caitlin, of course, accuses Lynne, who pleads innocent, and Caitlin finds that someone also turned the thermostat off. She actually deduces that some presence doesn't want her in the house with such remarkably small evidence. She tries to convince Lynne, who is actually sane and tells Caitlin that Caitlin is not. So Caitlin shows her a book on haunted houses that she carries around for good luck and plot convenience, and the book claims that ghosts don't hurt people, just move stuff around, and Lynne believes her.

Then, a banging noise from downstairs. The two rush down to discover their father washing his hands, having cut his finger on a knife that seemed to jump out at him. He pulled the drawer out in shock, and the girls propose a very sound and rational theory as to why this madness is occurring: ghosts. The dad laughs at them and then, something incredible happens. Something so important that I am going to bolden and underline it. Something so unbelievable that it gets its own paragraph.

“'Wait, wait, wait. Hold on here, girls,'” their father replied. 'This all sounds like something you saw on TV or read in one of those Shivers books.'" Yeah. You read that right. M.D. Spencer just made a reference to Shivers books inside a Shivers book. He did it. What is that called, when you reference yourself? Masturbation? No, I'm pretty sure it's called being self-referential. Well, there is actually so much wrong with that my emotions got all mixed up and I don't know what to write, or even think, about this. It's just... wrong, somehow, like having the sun rise in the west.

So, Dad brushes off his children, and Caitlin gets mad at Lynne again for no reason, and they notice that the silverware has mysteriously gotten packed into the moving box while they were chatting. I'm still pretty sure that this ghost just wants to clean up after them, but if Caitlin thinks that it's an evil presence bent on securing their departure, who am I to judge?

The family meets up for dinner, and the adults say that they will be going to a neighbor's house to chat. Now imagine how terrifying hearing that would be. You're going to be in a haunted house for hours with no adults, and on top of that, you have an annoying older sister who blames you for everything. I know, it's pretty scary.

So Mom and Dad leave, and all of a sudden, a ghostly moan comes from the basement. And then, of course, all the doors in the house start locking, one by one, as well as the windows. The phone is cut, and a door slams into Caitlin's face. Kitchen drawers start launching themselves, so Cait finally has a smart thought and gets them out of there. They head up to Caitlin's room, where they do some more research and find out that these aren't just harmless ghosts, this is a haunting house, a living house that hates people.

Caitlin breaks a window to escape, but the house nearly murders them with its own glass shards. The shutters close, which makes the experience even more horrifying. Lynne says that she hates the house, which might not be a good move since you never insult the guy who has you tied to a chair. The duo decides that the only way to survive would be to go down into the basement, where they might find one of Dad's tools to break a door or the poor house's heart with. They head down, and the basement door shuts closed behind them, and the lights go out. They run to the kitchen to grab a flashlight, and then they head on down to adventure.

Team Survival goes on to try to wrangle up a tool or two, but are instead greeted to the basement beams being destroyed. Now I may not understand the things this house is going through, but I'm pretty sure that collapsing in on itself will not solve any problems. Still, the sisters make it upstairs just in time not to die.

After Lynne saves Caitlin from the basement, the pair rack their heads for a new plan. Lynne reveals that she has a secret tunnel in her room, but she didn't want to tell Caitlin because her diary is in there, but if they were going to die anyway, Caitlin might as well just know. O.K, now I understand why Caitlin gets a tad angry.

So, plan B: Lynne squeezes through the tunnel to ditch her sister and get help from mom and dad while Caitlin tries not to die in the killer house. It would go perfectly, but the tunnel empties out through the ceiling onto the stairs, so Lynne gets a headache and the house gets to laugh with Caitlin at Lynne's stupidity, so only one party loses. The sisters run from locked door to locked door, and just as all seems lost, and Lynne is whining about hating the house, Caitlin says that she feels sorry for the poor guy. Just then, the doors start to open.

Lynne doesn't see why she would feel sorry for something like that, so she talks about how much she hates the house as it tries to murder her. Caitlin stops this by saying that she loves the house, but Lynne just doesn't catch on. So she spells it out for her. I imagine it went a little something like this: "S-a-y-i-n-g t-h-a-t y-o-u h-a-t-e t-h-e h-o-u-s-e m-a-k-e-s i-t a-n-g-r-y y-o-u a-c-t-u-a-l d-u-m-b-a-s-s." So, using the power of love, the house and the people start to get along, and they all live happily ever after. Still, though, I feel like M.D. Spencer is overestimating nonhuman entities' ability to understand English.

Insight into the Complex Minds of Characters:
"She walked over to the thermostat and found something very peculiar. The heat was turned off. Not just turned down, but completely off. As if there were not a house full of people that needed heat. As if no one were going to live in the house at all." I'm sorry, I just feel like maybe Caitlin is reading too much into this.

Hip References:
“Wait, wait, wait. Hold on here, girls,” their father replied. “This all sounds like something you saw on TV or read in one of those Shivers books. Now just stop and think about it. How could these things really happen?” I'm sorry, I just can't let that go. Just let it soak in for a little while.

Conclusion: So this book was actually not bad considering all the little mistakes it made. The characters were fun, at one point the scientist dad corrected Caitlin's grammar, so that was definitely a plus. The whole house survival thing was fun and creepy, so overall, I can happily give this a reasonably positive review.
Posted by jonwg88 at 12:51 AM