Shivers 18: Your Momma's a Werewolf 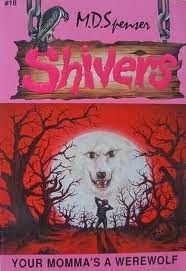 So when I saw the title of this book, my first thought was, "Wow, this is going to be really bad." And then I read the first few pages and I'm like, "Wow, this is really bad." The twist: It's actually pretty good. For a Shivers book, this is not bad. I mean, there are some annoying elements to it, but it's a welcome change from the recent crap I've created a synopsis for. On the other hand, when the most recent books were about an evil wave monster and a know-it-all freeing a family of killers, there's nowhere to go but up. Well, let's dive in.

Seems pretty bad, right? Well, his mom was in a punk rock band called "We Hate You." It's just too good to be true. I must have died and gone to heaven. "'But we didn't really hate people,' my mom insists whenever I ask her about it. 'We just pretended we did. To shock the audience.'" What audience? I actually can't believe it, it's the perfect mix of creative and stunningly unoriginal. So they live in Detriot, and Ignatius J. spends some time explaining Michigan's geography to explain where "up north" is. Oh, and they're camping up north.

Also in this stunningly fascinating rogues' gallery is Ignatius J.'s friend, John, nicknamed "Mole." He's a little nearsighted dork who loves history. He goes on over to Ignatius J.'s house in the beginning to show him a book about Fort Deckerdale, near where the group is staying. It says that all the soldiers at the fort mysteriously disappeared. Well, we know it wasn't ghosts, since M.D. Spenser's idea of ghostly behavior is turning up the thermostat.

The three arrive at the house only to discover that there is no TV, phone, and the only toilet is an outhouse. After getting over the shock of no NBA, History Channel, or punk rock music videos, whatever TV channel provides that, Mole sees a deer out in the woods disappear, grabbed and swept away in the blink of an eye. The next day, Ignatius J.'s mom pulls out a fake deer that people put out for target practice, so even the smart one in the group is an idiot. Ignatius J. and Mole decide to go search for Fort Deckerdale, but are stopped by a wolf. We can tell that it's big because of Ignatius J.'s statement, "This was the biggest, meanest wolf I'd ever seen." Even bigger than the ones in Detroit?

Well, anyway, the wolf jumps on Ignatius J. before his mom comes and tackles it, getting bitten in the process. Mole is actually the one to shoot the wolf. Mole. The wolf runs away because nobody in these books seems to die. Later, the gang goes to the town and buys some marshmallows, where a cashier tells them that it may have been a wolf that killed everybody in Fort Deckerdale. Shocker.

When they get back in the house, Mole and Ignatius J. play frisbee, as if people still did that, and stumble onto a lost dog, which Ignatius J. originally mistakes for a wolf during a chapter ending. When going to ask his mother if they can keep it, Ignatius J. stumbles upon her shaving her face, which shows how much M.D. Spenser knows about the menstrual cycle. But then, in this really cool scene, Ignatius J. wakes up that night to realize that it's a full moon. He wakes up Mole and they hear the wolf howling from downstairs. He shoves his friend out the window, partly to save him and partly because he's really annoying, and the wolf bursts in on hind legs in his mother's clothing, standing over him and...

It's a goddam dream sequence. It. Is. A. Dream sequence. BUT BECAUSE WHYNOT, RIGHT? Now I remember why I thought, "Wow, did Vlad the Impaler write this book?" while reading it. Seriously, it's not a bad book, but the dream sequence being the best part just hurts me. Like being impaled with a giant stake. And the next part isn't even cool, it's just the mom eating raw bacon for breakfast. You have done a lot of crappy dream sequence chapters in the past, but you really screwed us this time, M.D. Spenser. That reminds me, happy Valentine's Day, readers. I hope you got shot with Cupid's arrow instead of M.D. Spenser's misleading bullet of crap crappiness.

Ignatius J. tells Mole about his suspicions, and Mole checks his mini-encyclopedia to make sure it's not rabies. I'm being serious. You know what other media characters carry around mini-encyclopedias? M.D. Spenser, probably. Do you really want to be that kind of guy, Mole? Later, when the group goes for a picnic, Mom says that they should really fatten Mole up. To be honest, I really wouldn't care if Mole died. So... yeah. Anyway, that night, John and Ignatius J. see Mom turn into a wolf and run out of the house. Then they fall asleep. I'm done, I really am. There is just too much wrong with this.

In the morning, Ignatius J. thinks it would be a great idea to go say hi to his mom, maybe ask her opinion of the weather, how that night's hunt went. But, in a scene that's actually pretty scary, the mom sneaks up from behind and demands that he be quiet before tossing him out. The duo finds that their dog is gone, and a broken collar is the only thing left, so they go down to the cellar to get a shovel to bury the collar. Before they can get down, though, Ignatius J.'s mom comes out and dives at them, ending up in the cellar. The mom grabs Mole, and Ignatius J. thinks, "Hmm, I probably shouldn't save him, but letting my mom eat the only other person here could come back to bite me," or something like that, so he saves Mole.

The two remaining humans decide to drive back to town, but then they remember they can't drive and crash. They get out and Ignatius J. says, "If we stick together, nothing can stop us!" That's right, one's the brawn and one's the... Never mind, they're screwed. All of a sudden, a man named Jesco runs into them with a rifle, but they make peace. Jesco's an author, writing about the supernatural. What a coincidence! He lives out in the forest for a lack of distractions and probably because of a lack of friends, and invites the two to his house. What a great lesson to kids. When a man living in the woods asks you to come to a remote cabin, go with him, especially if he's crazy. Jesco reveals that the only way to cure their mom is with a concoction made with the hair of the wolf that bit her. There's one other ingredient though, so hold your horses: water. Water and hair. Ingenious.

The team goes out with a tranquilizer gun and, sure enough, they find the wolf. They tranquilize it and steal some hair, create the complicated formula, and go back to the house. Jesco and Mole stay outside with a "We'll hold the fort out here, you go get 'em, sport." Ignatius J. goes in alone, is attacked by his mother, and ends up just splashing the potion down her throat. The rest of the team comes in after the fight is over, with the dog, and pretty much says, "Yeah, we heard you scream, but we also saw the dog, and we thought that you had this on your own, so good job. Kudos. Go team." Then the mom didn't remember anything and it all ended happy ever after.

Insight into the Complex Minds of Characters:
"Telling a parent that you think they might be turning into a murderous night creature sure isn't an easy thing to do."

Beautiful Imagery:
"But she picked me up like I was a newborn baby. Or like she was Arnold Schwarzenegger."

Did... Uh... Did You Even Go to School?:
Nothing. It's crazy, considering the book, but I actually couldn't find anything that fit the topic.

Conclusion: Despite the constant oddities and bad characters, this was actually a pretty good children's horror book. It was suspenseful, and that's more than I can say for most other Shivers books. It's one of the better installments, which is really kinda sad because it's not that great. Overall, props to M.D. Spenser on this one, because even that dream sequence didn't completely ruin the book.
Posted by jonwg88 at 2:57 AM