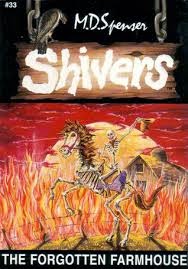 I'm back in California and have never been happier. Unfortunately, I'm going to have to skip Shivers #32 until my new copy arrives. It's a shame, really, because I didn't dislike that one. This book, however, is a different story.

One of the many things that really bugs me about this book is that the vast majority of sentences are written in an extremely simple way. It's as if M.D. Spenser was trying to have the text flow as un-smoothly as possible, and the dialogue is exactly the same, it's awful. Straight from the book: "'This is great, isn't it?' I said.
'Yes,' Ana said, 'I'm looking forward to getting to that rough ground ahead.'
'I am, too,' I said.
Maybe I wouldn't have said that if I'd known just how rough the ground was going to be.
We came out of the woods and crossed over the ridge. Now we started heading down the slope."

To be fair, it gets better after the first quarter of the book, but there are still plenty of overly-basic sentences throughout. Despite being obnoxious, it really does take away from the plot, because it means there is very little detail and the characters don't have much of a personality.

It all starts when thirteen-year-old Nico and his twelve-year-old sister Ana are getting ready for a horse-trek adventure in the mountains, which is where you ride horses for a few days. Ana has black hair and is described as "so cute." Nico also has black hair... I think. The protagonist doesn't really describe himself. Oh, and another thing that bothers me: Each chapter is literally- and I made sure this was accurate- an average of two-four pages long. There is an overwhelming amount of two-page chapters whose sole purpose is to let the reader know that this book has a conflict. Anyway, the group eventually gets to a very rough, rocky part of the mountains, at which point their guide totally ditches them and they fall behind the rest of the group to help a girl with her horse. Eventually, they lose the girl too, so it's just the two of them.

At this point, you may have realized that even though the main character has little-to-no personality, he is unique in his lack of common sense. Here's another example: the siblings stumble upon a line of trees. Despite extremely heavy fog, they eventually find a creepy path into the woods. They follow it.

Oh, and it's almost night-time, too. They gallop through the forest while the fog gets steadily thicker until they can't see a thing. Eventually, the characters realize that they're on different horses than before. You can read that again if you have to. You know what, I'll be nice and simplify it for you: They are riding small, black horses, and then they are riding large, white horses. OK, I can dig that, just as long as something credible comes next.

I'd like to take a second to express something else that bothers me- I'm sorry, I know I'm complaining a lot, but this book really does have a lot of issues- the two main character are just blank slates. It's bizarre... Nico the Narrator insists that his sister has a logical, organized, strong personality for so long that you actually end up almost believing it, and maybe she does and I just don't see it, but I just don't see it. Ana will perform simple actions and Nico will think things like "classic Ana," or "just like Ana, being so strong, organized, and logical." When Ana remounts the weird other-horses by climbing on a boulder, Nico says "leave it to her!" as if that required more than a functional brain to come up with. I'm pretty sure he worships her. And even on the off-chance that I'm being too hard on poor M.D. Spenser and this girl really does show a consistent and unique personality throughout the beginning of book, she completely loses it as soon as their horses change when she starts whining about how scared she is and rarely picks up her strength, logic, and organization again.

OK, I'm sorry, I'll try to stop venting about this book now. To be fair, this is a book review site, hence the title "Gnarly Book Reviews," but I guess I shouldn't be so hard on the children's horror books because I'm pretty sure that makes me a bad person. Honestly, I really do like Shivers as a whole, I think it's reasonably well-written and M.D. Spenser certainly has potential, and many of the criticisms are just for joke purposes, but sometimes I find it hard not to complain, because the flaws are often endlessly recurring. But I promise, from now on, only plot.

Nico and Ana hitch a ride on their mysterious new steeds to a farmhouse and barn, where they get off the horses, knock on the door, and are nearly shot with a shotgun. The siblings, being strong, organized, and logical, promptly fall down the stairs on top of each other while the shooter misses yet again. He's, like, two feet away, so with aim like that I'm not surprised he's dead.  Oh, spoiler, he's dead.

The two kids are saved by the shooter's wife, Mary, who says that they should at least get to know them before ruthlessly murdering them out of sheer hatred for those who killed Mary's family. The shooter, a middle-aged man named Bob whose face is half blown off, agrees before his dead cat attacks Nico. Nico and Ana walk into the house and notice that the back of Mary's head is blown off. Despite Mary's arguments, Bob decides that even though these children have nothing to do with their murder, they're going to have to die, and then he invites his kids, Daniel and Sara, to do it. Damn, this book is legitimately disturbing.

But wait, there's even more to make this book traumatizing. Both kids are around twenty, half of Daniel's neck is missing so as a result he has no throat and can only make grunting noises, and Sara can do nothing but slowly walk because the top of her head was blasted off so she has no brain. Oh, but check this out: Bob hands the gun to Daniel, who can't take it because his head flops forward onto his chest, so his mom starts crying. It's actually pretty shocking.

Nico and Ana take this as an excuse to attempt an escape. At this point the siblings deserve to die, there's no excuse for bad manners. Nico runs into the forest for a while before he notices that his sister didn't make it out. He... I mean, it wouldn't... it's his sister, I just feel like maybe he should've realized this as they left the house. When Nico gets back to the farmhouse, he looks through a window and sees Bob pointing his shotgun directly at Ana's face. He seems ready to kill her, but first he has to make sure to yell the right amount of threats so she knows well ahead of time how ready he is.

Eventually, Nico gets bored and decides to go check out the ghost horses. He leads them to the front yard and gets knocked down and sat on by Daniel. Just imagine how gross it would be to be held down by a psychotic young adult with half a neck. Ew. Anyway, Nico gets dragged inside the house, where he learns that Ana decided to escape while Nico was attacked. You know what bothers me about these people above all? They're uncoordinated.  Fortunately, Nico comes up with a plan to intimidate the dad. It works, and he keeps pushing Bob back so that he can grab the shotgun, and ends up going all the way around the room so that the dad grabs the gun again. Even when victory is literally within his grasp, he fails, and I honestly don't understand how he fails so effectively but there you go.

All of a sudden, Ana has the ingenious plan to ride her horse through the door. Nico hops on back, and the two of them ride out of the forest and into a friendly family, where they happily contact their mom while the dead family is forever stuck in a hell-like purgatory.

Insight into the Complex Minds of Characters:
"'And I think we should follow this riverbed downstream,' she said. Ana would have been great in the old pioneer days."

Beautiful Imagery:
"My heart stopped, and so did my brain. I couldn't think of anything I could do to save Ana."

This Is Biologically Impossible, but That's OK Because This Book Is About Ghost Farmers:
The daughter has no brain, but she can walk. Crazy.

Conclusion: I have to give M.D. Spenser props on one thing: he really did attempt to stick to the genre. Many of his books veer off from being horror and instead become adventure-ish, but this one was full-on horror. That being said, problems such as the annoyingly short chapters, simple sentences, and weak characters took away from the experience. The experience itself was a bit too gruesome for the intended audience, in my opinion, so I didn't love the wanna-be slasher vibe. The plot is like some kind of childish combination of House of 1000 Corpses and Silent Hill (the movie, not video game) that was actually a little scary, so I'll give M.D. Spenser props on that, but ended up giving me a feeling that it could have been done better. I could very well be being too hard on it, but I just didn't like it as a book. That being said, I suppose it's not bad for its genre.
Posted by jonwg88 at 2:41 AM