Shivers 24: The Ghosts of Devil's Marsh 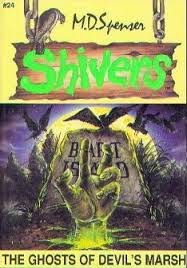 So here's the newest update. For the next week, I'll be posting a good amount of them. I've been thinking about having friends write stuff on the blog, so that's something that... might happen. I know some pretty funny people, so that could end up well. Hopefully. I mean, I would still be doing the weekly stuff, but there would be other people with different writing voices, so it sounds like a pretty gnarly idea. I don't know, we'll see how it develops.

So the main character is named Samantha. 24 books through and M.D. Spenser already ran out of names. If you don't remember, Samantha "Spooky" is from Ghosts of Camp Massacre and was the worst human being on the planet and oh my god he totally copied the title, too. Well, at least this character is a major step up, but what is it I always say? Something about how it's easy to raise a really low bar, and this is a really low bar.

So good Samantha, age eleven, is staying with her cousins on her dad's side for the summer because her mom has to go to France for two months for work. Samantha's dad died when she was little, so she has to stay with his sister, Sylvie. Sylvie's husband is named Tim, and her children are Adam (Samantha's age), Andy (six), and Allen (the oldest who has no part in this book whatsoever), and Alfie (the baby). They live on Bart's Island, which I assume he made up because there is no state or slightest description of the city.

The book starts out as Samantha receives her new room, a walled-off corner of a bigger room. Oh, and by walled-off I mean it has blankets hanging from the ceiling. Oh, and there's a vent leading down to the boys' room, so that's gonna be awkward. Well, it's no Holiday Inn Express, but it'll do. It was in that very room that Samantha started hearing yelling between the two significant boys, with such actual phrases as, "'You do and you're dog meat, Andy,'" and "'Booger brain!'" God, it's like reading The Goonies. Turns out that the boys are just fighting about something or another, so I'll spare you the details since that happens, like, twelve times in this book.

After dinner, the kids decide to go down to the beach. Samantha is just frolicking along when all of a sudden, Adam and Andy attack her with water guns and... tackling. They threaten to throw her into the ocean when she starts crying and there's that whole awkward, "Oh... shoot, should I approach her, should I not get involved, or maybe I should just leave..." moment. They decide to walk on back when all of a sudden, lightning strikes a tree directly in front of Samantha.

Everybody's OK, so they decide not to worry. But that night, Adam comes in to Samantha's room, complimenting her on her Grateful Dead shirt. Oh dear lord... I have the same shirt as a Shivers protagonist. Well, I know what's going in the bonfire tonight. Anyway, he had a ghostly experience he needed to share, but only if Samantha did a "blood swear," which is where you prick your thumbs and put them together and is apparently a thing. So Huck Finn starts to tell his story.

Next to Adam's house is Devil's Marsh. It's... you know, a marsh. One day, Adam was biking through Devil's Marsh, where any foolish enough to tread shall perish but because whynot? All of a sudden, a nearby tree was struck by lightning, and he kept feeling weird and tingly afterward. The reader can tell that Samantha's having the same problem because of her constant, "I know, me too!" synonyms after every sentence.

So Adam goes down to the struck tree the next night, and hears voices calling him, and ever since then he was able to see things others could not. Samantha is flabbergasted, but then Adam reveals that it was all a big joke. Wow, he sure got her good, pulling an Adam like that. The next day, the gang (Samantha, Adam, and Andy) go to get ice cream. But Adam and Andy ditch Samantha on the way back. They purposely lose her in the middle of their town. Huh. Well, Samantha eventually stumbles upon the resident crab salesman/crazy old lady, who tells her that she has the "devil's power." I wish I had one of those. The best we've got is an avid PCP user/crazy old lady.

Samantha runs away and stumbles upon a pretty bird, which she follows to the local graveyard. There, the bird shows her a MacMillan family plot, and the reader learns the main character's last name halfway through the book. So Samantha finds a gravestone with her exact name, with the death year the very year that she was born. The shock apparently made her a klutz because she then proceeded to knock the angel statue off old Samantha's gravestone. The angel dropped a little cracked heart on the ground, so Samantha does the responsible thing to do and steals a rock off her dead relative's gravestone.

So Samantha's wandering through the marsh when, all of a sudden, Uncle Tim comes in his car and rescues her. Back at the house, Aunt Sylvie shows Samantha some pictures from the photo album of her and Samantha's dad as children, along with some pictures of Sylvie's grandma. That night, as Samantha is going to bed, she hears ghostly moaning calling out her name and starts to run downstairs when she sees Adam standing on a chair on his bed, calling into the air vent. Oh, he was trying to scare her. Hardy har har ha ho ha ha lulz so much effort. What child actually tries that hard? Jesus, he's pulling such an Adam right now, it's unbelievable.

But here's the thing that's gonna really blow your mind: there's a good dream sequence. There is a good dream sequence in a Shivers book. There's this snake who paralyzes Samantha and she hears two women arguing, except that they're really a snake and a bird, and the snake starts to attack Samantha but then the bird fights it so Samantha runs away and wakes up. You can't tell from that run-on sentence, but it's actually pretty well-done, it had a nice, dreamy feel to it.

When Samantha wakes up during the night, she sees a huge fire deep in the marsh, but when she wakes up Aunt Sylvie, it's gone. When Samantha tells Adam the next morning, he recalls a story: there once was a woman who smothered her son with affection. She didn't want him to leave her, but he was seeing someone behind her back and told her he was getting married. Unfortunately, this was while they were driving through the marsh and going towards a truck, so Mom decided to go out with a bang as well as a heartless murder. I swear this is straight out of Angel.

So ever since that collision, people have seen fires. Samantha also tells Adam everything else, and he actually believes her, partly because the BS story he told Samantha earlier was a story some other people had told. He decides to bring the group back to the crazy old lady's house. On the way, Samantha faces many obstacles, such as...
1. Evil laughter in her head
2. More evil laughter in her head.
3. "Gangster's Paradise" by Coolio stuck in her head
These things shouldn't stop her in her tracks, but they do. Oh, and then they run into an alligator on a bridge or something. But then Allen's (the older brother, remember him? This is when he's important) friend drives by and saves them, taking Andy home. Adam and Sammy go to Nadina's, the crazy lady's, house.

Nadina tells them that the ghost of the old Samantha must be put to rest by going to its grave at midnight, maybe wearing bright clothing so the kidnappers can have an easier time finding them, burning a picture of the grandmother, and burying the ashes. When Sam and Adam get back home, Sam asks Sylvie for info on Sam's father's grandmother. Sylvie said that Samantha's great-grandmother always felt that the people she loved left her, and she seems overdramatic and annoying. Blah blah blah her loved ones died blah blah blah granddaughter got married and only had the grandson left before he married too. To show her he was sorry, her grandson named his daughter after her: Samantha. But then there was a car accident and Samantha's dad and great-grandma died.

So Samantha and Adam get to the grave, and Adam starts burning the picture while good-Samantha is tortured by evil-snake-Samantha. Finally, the ritual is done, the ghost forgives her, and there's some cheesy final line. The end.

Insight into the Complex Minds of Characters:
On a gravestone: "Winslow Thomas Stevens. December 21, 1760 - April 3, 1776. No braver son died for his country.
Cool!"

Did... Uh... Did You Even Go to School?:
"'Chhhhhhhaaaaaaaaa,' the alligator hissed again."

Conclusion:
For a Shivers book, it was pretty gnarly. The characters spoke like actual human beings, with unmentioned back-and-forth's like I would have as a kid. It certainly wasn't scary, but the story was OK and the writing style wasn't bad, even for a first-person novel. All-in-all, good job, M.D. Spenser.