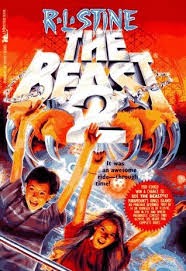 Judge: I'm calling the court to order! This case is for Jonathan Golden calling for the "death by roller coaster" of... wait, you realize that the death penalty isn't used in the state of California, right?

Jonathan: I do now, Your Honor.

Judge: You also realize that "death by roller coaster," most likely falls under "cruel and unusual punishment" and is thus a prohibited form of execution?

Jonathan: Have you ever read The Beast, by R.L. Stine, Your Honor?

Jonathan: Have you ever read The Beast 2, also by R.L. Stine, Your Honor?

Judge: Once again, I can't say that I have–

Jonathan: Well, then I'll be the judge of just how cruel it is, Your Honor.

Judge: I hope you realize that this trial is something of a joke, son. Apparently, you held the district attorney at gunpoint and then, when he refused to allow this strange and altogether wasteful trial even under the threat of death, you broke down and started crying, insisting that you had proof on "an mpeg4." I'm not sure if you know what an mpg4 is, but apparently the D.A. was so moved by your pathetic tears that he accepted $300 in cash from you in order to make this trial happen.

Jonathan: Yes, Your Honor, that is how I remember it.

Judge: So why should R.L. Stine be prosecuted, then?

Jonathan: Well, Your Honor, a while ago I reviewed a book by R.L Stine. I recently read the sequel, and it was bad, Your Honor. The first book sucked, but this book decides to both barely acknowledge that its predecessor existed and completely duplicate the events, until it splits off into its own ridiculous time travel story.  Let me tell you this story, Your Honor–

This book starts with our two lovable past protagonists, James and Ashley, riding the Beast.  Again. I recommend reading the first post if you haven't. I don't know how in-depth I went with the first post, but the narration is filled with little joke-comments that James makes. They're very rarely funny. For instance, he spends three paragraphs talking about his new favorite candy, "Karamel Kreemies." It's so much worse than it looks. Anyway, it's been a year since the events of the first book, and the duo is back to Paramount's Kings Island for more thrill-riding action. James decides to go grab the aforementioned candy, and Ashley waits in the line to ride the coaster again. They manage to snag the front-row seats, and just like last book, Ashley goes missing.

James runs around the park looking for her, again. He stays after it closes and dodges guards. But it's all nothing compared to what comes next. Ready? James sees two guards coming, so he ducks behind a trashcan. One of the guards leaps toward the trashcan and says "Lookee what I found"... and he picks up a silver dollar. Getting run over by a roller coaster is too good for you, R.L. Stine. You found it necessary to repeat the same bad cliffhanger chapter ending in the sequel. There are no words to express my rage.

Luckily, James does get chased by guards, and runs into P.D. Walter, the ghost from before. They have a nice little chat before the guards come back and grab James. On the way to the main office, a ghostly skull manifests and scares them while James escapes. P.D. leads him back to The Beast, which he rides. Here's where things get bizarre. James wakes up in a little pod, which a mustached man pulls him out of. He is then forced to change into skin-tight silver clothing. OK, so far, so molestation. He then drags James past a fish with the face of a person (I don't know either) and shoves him into a cage, where he's forced to play the part of a child of the future along with many other kidnapped children, led by Captain Time, the man who brought them there. After a pretty painful show, James finds Ashley and they learn that Captain Time brought the two back in time with his time machine. OK, that makes absolutely no sense, but it's OK, because I would go insane if I dwelled on it too much.

Jonathan: So, what do you think, Judge? Can we send him to the big house?

Judge: You don't know how trials work, do you?

Judge: I'll admit, this sounds pretty terrible. Perhaps you're exaggerating a bit, though.

Jonathan: With all due respect, sir, I know my books. I worked at Paradise Press during another special edition post.

Judge: Alright, stop, this is getting too meta for my liking. Just go on with the story.

This book tends to make sudden leaps through time, filling in the reader on what happened during the hours we were not with the protagonists. Skip through Ashley showing James the ropes and them putting on new shows, because it's night time now. James wakes Ashley up, and the two of them sneak to the time machine. They mess with some dials and knobs, one of which rapidly ages them. Soon enough, they lose their driving abilities and begin drastically changing their views on racial equality. They change it back, and then are dragged out of the car by Captain Time. It turns out that they alerted him to their meddling by turning a wheel in the time machine, because "that wheel sets off the alarm." So basically, when you get down to the basics, the fundamentals, if you will, what I'm hearing is "fuck logic."

Captain Time completely forgives them, so I guess he's not such a bad guy after all. And then, the first sentence in literally the chapter right after that happens is "the next morning Ashley and I escaped." Cool, I'm glad to hear it, I guess the book's over. But it leaps forward to after they escaped and then sketches out how they climbed up a window they just noticed. That's just bad writing, honestly.

Judge: Order! I will not have senseless insults in my court.

Jonathan: Objection, Your Honor. I have proof, in the form of a jpeg6, that R.L. Stine can't write.

Judge: Just learn what you're talking about, please.

Jonathan: Here it is:

•"Captain Time might be a genius. But he was an evil genius, I decided."

Jonathan: I'm too lazy to look for more, Your Honor. But back to the story...

James and Ashley ride the ferris wheel to spot the Beast, which they do. Except it's actually an old farmhouse, they had just both mistaken the old farmhouse as a roller coaster. Obviously, guys, what else could have happened, are you convinced yet? So the pair wanders around the fair for a while before getting caught again. Then the book fast forwards three days, which really isn't OK. The cousins watch Captain Time at work at his time machine, and he summons a pterodactyl. I wish that I was joking, that I was pulling some sick prank, but no. A pterodactyl. The twins save Captain Time for some reason, and then decide to escape.

James "figures out" that their 1990's clothes are the key to returning, because it will make a "time warp." OK, I guess I'll buy that. They change into their old clothes and get to the time machine. It doesn't work, so James decides that the only way to return now is by chewing his Karamel Kreemies from earlier, because, I'm quoting here, it will create "a time warp." Of course, it's so simple, it will create a time warp guys, a goddam time warp, guys, don't you understand? This book is so bad, it's quite literally beyond comprehension. But it works, and they make it back in time to where they have just enough time to go on The Beast again, a hint at a sequel that, if there's a god, will never be. I guess the rest of the future kids are screwed.

Judge: I sentence you to a lifetime of no more writing. That sucked.

Insight into the Complex Minds of Characters:
I've done enough.

Beautiful Imagery:
"She slithered over the sill in her silvery suit."

Sexual Harassment, Much? Yes:
"'Hey, girlie,' he called out. 'For a penny I’ll let you step on me.' Ashley stared down at him in disgust. 'I don’t have a penny,' she told him. The dwarf grinned. 'I’ll let you do it for free. Go ahead. It won’t hurt me. Step on my chest.'" Jesus.

Memorable Cliffhanger Chapter Ending (here's to you, Troy):
Ch. 18/19: "There's The Beast! Now we can go home!" Just kidding it's a barn.

Conclusion: This book manages to far outshine its predecessor in terms of being awful. Nothing in this book makes sense, the storytelling is lazy and the only remotely entertaining character, P.D. Walter, is only in the book for, like, two chapters. It's such a stupid book.
Posted by jonwg88 at 3:54 AM