Shivers 16: The Beast Beneath the Boardwalk 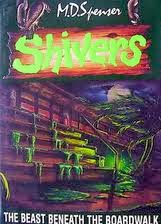 I really have to find a new book series, this is killing me. I ended up doing this update pretty late because I got that new app, "Flappy Bird," and I can't stop playing. My high score is 35. I texted my friend and said, "Ha, beat your high score. Sucks to suck," and he said, "You still play that? I deleted that days ago." Everybody whose faces I shoved it in only told me I have no life. I guess that it's true what they say about how lonely it is being better than everyone else. Maybe I should do one of those special edition updates soon. That was fun. Also, I'm going to get one thing clear right now: there is no green slime. That cover is lying. In fact, I don't know where the scare factor is, but that's Shivers for you. I was going to make a The Blob joke, but it's useless here. I don't even think this came from a movie, it's just a really weird plot.

Unfortunately, the narration is pretty bad in this one, too. This character isn't as obnoxious as Spooky, but then again, no one is. This character just says everything he's thinking. An example: when his dad says he has big news, the book says "Sometimes when he says that, it's something good. But not always." Yes, that pretty much covers every possibility. When his dad says it's about summer vacation, "So it was going to be good, right?" And when his dad says that it will get complicated this year, "Oh, so now it was going to be bad!" It's like hearing The Fonz tell a story. It's like that every. Single. Paragraph.

So, Alec Kelly goes to his uncle Louie's house in Seacoast City, New Jersey, every summer. He loves to hang at the arcade, "Lucky Louie's Arcade." But this year, he has to go with his Irish cousin, Mary, who's also twelve (I probably don't need to mention that Alec's twelve by now) and super nice. It's weird that bad stuff happens, since she carries that luck o' the Irish. I happen to love Ireland, since I use Irish Spring shampoo and deodorant. Be ready lads, it's been known to bring out the lasses. Wait, when he hears she's from Ireland, he says, "'But she's in Ireland!,' I said, 'On the other side of the Atlantic Ocean!'" But Mom, but Dad, that's on the other side of the Atlantic Ocean! The Atlantic Ocean!

What might be the worst part of this book, other than the narration, is the foreshadowing at the end of every chapter one and over. Every single chapter, it says something like, "Too bad that was the summer we totally almost died!" or "So it was going to be good, right? Wrong, we totally almost died!" I'm not exaggerating. I checked, it was actually at the end of every single chapter leading up to the conflict. This is why M.D. Spenser needs to take a class on not using literary devices.

So they get to the arcade, and Louie is this totally chipper dude who is pretty much the same personality-wise as every other adult in this book. Or series. He and Mary spark up a conversation, and Alec admits that she's charming. Lucky him, that's legal in New Jersey. Louie points Alec and Mary, whom I always picture as a nun for some reason, towards the cellar where the old games are. There, Mary confronts Alec for acting like what the Irish would call, "An aul git" and just being major "ballix." He apologizes, and they make a wee pact to have each other's heinies.

Soon, Alec falls down the stairs and cuts his lip, so Mary pulls out a handkerchief and takes care of him. It would be like a scene from one of those movies, because Alec seems to always forget that they're cousins, but the cellar gets mysteriously colder and they mosey on out in three shakes of a wee lamb's tail. They meet up with the family, and a terrible hurricane/rainstorm/potential flood starts moving in. The mom and dad go somewhere, Louie goes somewhere else, and Alec and Mary head on back to Louie's place in those yellow slickers. That reminds me of my trip to Scotland, when I got one of those ponchos at a castle and it had the name of the castle on it so even though I make a mean Scottish accent, everyone knew I was a tourist. I ended up buying a kilt, but that looked even weirder so I just wore the kilt while on busy sidewalks back in my own city.

Moving on, instead of being content with being safe back in Louie's house, they get hungry and decide to buy food. Alec asks how much money Mary has, and when she says that she's carrying thirty pounds, Alec gives her one of those looks that say, "I don't know what it's like back in Ireland, but here in America, we use...
Real Money." They end up with enough, though, but forget that it's a freaking hurricane so no stores are open because the boardwalk is literally being torn apart. Looks like Alec is, as the Irish are so fond of saying, "As sharp as a beach ball."

They end up at the arcade with a pizza they bought, and are frightened by this witchy cackling sound. After a couple pages of "suspense" it turns out that it's just the fortune teller booth. So it was going to be good, right? Alec decides to take a look outside, but gets hit in the head with a neon sign and gets dragged back in by Mary. Then he recounts what happened with a "Okay, here's what happened." Basically, it was total chaos out there. And it was flooding. Oh, and there was some kinda face in a wave or something, I don't know.

The two decide to eat their pizza, which is now soggy and gross. Too bad they didn't have a phone, or they could order 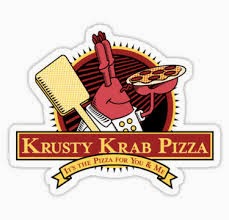 Remember that? So many years ago. Well, Alec decides that he wants to have another go at seeing the outside, preferably without being hit in the head (that's him speaking. Not me.). He looks out, and there's the evil face in the wave again. It comes crashing down and creates dozens of grasping water hands which split into little hand-fingers. Is this original? Can somebody please tell me? If it is, then the stereotype won't hold. I searched "stupid wave monster" but only came up with gnarly surf pics and movies by The Asylum. Guess how Alec beats the monster. I'll give you a hint: it's the second stupidest thing that could happen, right behind offering friendship. He stands his ground, proving he's not afraid. Seriously. Because whynot, right? Oh, but then Mary shows up and screams and gives it power, so they have to go back outside and do the whole thing again. Jesus, I hate it when people interrupt you like that. It doesn't even work, too.

But they do win eventually, and this is the biggest because whynot in the book, perhaps the series. They plug in the fortune teller machine, and being laughed at makes it shrink back into the ocean. Geez, for being an evil wave monster, that thing was kind of a bitch. Anyway, it was all happy and the storm ended and everything was normal again. What a terrifying ending.

Insight into the Complex Minds of Characters:
"I hate tea without milk. Everything was just a total disaster."

Beautiful Imagery:
"He handed me the keys. One had a red plastic thing on the chain. The other had a white thing."
and
"It felt as if I'd been touched by an icy fingernail."

Hip References:
"It's like one of those monsters in those Japanese movies. Something like Godzilla or Rodan." Mothraaaaaaaaaa!

Did... Uh... Did You Even Go to School?:
"The air was a little cooler, and kind of hazy white near the horizon, and the smell of salt and seaweed and whatever else goes into ocean water hit my nostrils."

Conclusion:
I don't know. The plot was O.K, I guess. Not scary, but the characters were kinda fun to read about. And by characters I mean Mary. Only Mary. The resolution was exactly like every other book: they all live happily ever after. The writing just wasn't that great, though the word "bedraggled" did award some points. I think I have the perfect quotes for this: "So it was going to be good, right?""Oh, so now it was going to be bad!" Seriously, though, it was not terrible but definitely not good.
Posted by jonwg88 at 1:22 AM