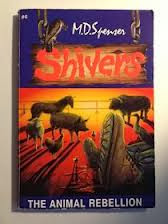 This book opens as our computer-geek protagonist, Winston, is out driving with his cousin, Brad, and his uncle, Bob. Winston and Brad are all buddy-buddy, even though Winston is a geek and Brad is a jock. Their specialty is saying something that obviously isn't true, getting the other person to believe it, then punching them in the arm and calling them geekhead/jockhead. So Winston is a city kid, staying at his comfortable house in the city. Psyche, gotcha geekhead! He's forced to go on a vacation out in the country where everything is unfamiliar. It's the 4th book and I can already predict the beginning. Oh, and also Winston's twelve. Obviously.

So the Brad/Bob farmer duo trick Winston into believing that the car and farm are infested with animal ghosts, which he believes because he think he's smart but, gotcha geekhead, he's not. So they get to the farm and it turns out that Brad has a computer. With computer games. Winston feels right at home until Brad tells him that his room is haunted because the previous owner was brutally murdered in it and gotcha geekhead and oh my god there are way too many of these.

So they go back to Brad's room where Winston reveals that he follows sports, even though he's a nerd. It doesn't help convince the reader that he calls the athletes on Brad's wall "sports guys". So then Winston pretends to get electrocuted and his cousin starts to give him CPR, which is a little awkward since Winston was faking and could have punched Brad at any point. Gotcha, jockhead! I hate these characters.

So they start to install such obviously fake games as "Terrible Battle II" and "Dogfight to the Death". Maybe this book should be titled "Terrible Book II", amIright? Then Brad gives Winston a tour of the barn that ends with a friendly horse named Demon brutally biting Brad's arm. Maybe they should have named him Snuggums instead. They show uncle Bob his bite, which he dismisses with a "you must have spooked him" instead of the necessary "holy shit my horse just bit my son for the first time ever". Then Winston and Brad go back to Brad's room, only to find a new game called Animal Killers.

The title showed horses that looked just like Demon eating human limbs with a beautiful, redish-orangish sunset painted sky, a smiling sun complete with sunglasses, and the kind of surreal animation only found in programs attempting to convey the true power of friendship. So Winston freaks out, Brad claims coincidence-ies, and they forget about the game.

One of the farm-hands, Zeke, gets bitten and kicked by another horse named Tornado, and Bob takes him to the hospital, leaving the other boys alone. I can only assume that Zeke was given better treatment than Brad only because of the comparative amount of work that each can do. On a farm, family don't mean nothin'. It's all about the productivity. So they both decide to disregard everything that had previously happened even though horses were literally running rampant and go to bed. All of a sudden, Winston gets a surge of bravery (the better word would actually be stupidity) and decides to check out the barn for no reason at all other than the fact that he just feels like it. See, on a real farm, that kind of attitude would get him whupped. He would get whupped bad.

He goes out to the barn, where the animals just stay in the back of their stalls and watch him. Then a rooster scratches his head, and the damaging of the stupidity cells used by his brain as substitution for actual brain cells causes him to want to get out. Without closing the barn doors.

He goes to his bed and looks out his window and sees all the farm animals in a huge crowd, talking together and looking at him simultaneously. My Goat is a little rusty, but I believe one of them suggested that they "whup some sense into that one". Then he goes to get Brad and, of course, only Demon and Tornado were still there. They go outside to round them up, but the horses try to bash their brains out. Then Winston has the brilliant realization that maybe they should check the video game that seemed to prophesies all these events in the first place. The instruction manual says that the animals are rebelling (WHAT? NO!) and that they can run, hide, or try to capture the animals. If they harm one, though, ten more will come. The goal is to survive the surprise attacks. Now that the rules are set, let's see how our hero plays the game. Spoiler alert: He's a spastic, idiotic geek. So probably not well.

The animals chase them into the kitchen, then back down the hallway, where Winston trips over a table or something, which I admittedly laughed at even though I don't think that it was for comedic effect. Then they go to the bathroom and then the attic and then they jump out the window and make it to the barn. Winston, in a moment of genius, decides to go back and finish reading the instruction manual that he left behind. He has Brad distract the animals because he's not comfortable around dangerous situations and sneaks into Brad's room. Then he and the rooster from earlier have a showdown which ends with Winston taking the video game hostage.

The instruction manual says that the game is endless fun, meaning that it actually never ends, like the amount of books that Dean Koontz creates. Then Winston realizes that if the video game dies, the whole barnyard murderfest thing dies too. The video game burns, Brad is saved from having to keep sitting on the barn roof, the animals keep attacking, the computer is wiped, then things go back to normal. Hurrah.

Insight into the Complex Minds of the Characters: (When burning the game) "My parents taught me never to play with fire but this was an emergency. Even they wouldn’t mind me lighting a match to protect my life! And my cousin’s life, too!" Everything you do, Winston. Every damn thing you do.

Beautiful Imagery: "The animals seemed like football players before the Super Bowl — pumped up and ready to get into the game. Only this time, Brad and I were the footballs." This isn't exactly imagery, but this line is so ridiculous I had to include it somewhere.

Hip References: Star Trek is literally mentioned, like, every second page. The main character tries to compare himself to Kirk all the time, he compares his escapes to Scotty beaming him up, which did make me laugh, but I'm afraid your preachin' to the wrong crowd, Spencer. The kids these days probably haven't actually seen the original Star Trek. But never mind that.

Conclusion: A pretty good book so far. Not amazing in terms of the quality of the writing, and you couldn't tell from reading it, but this is by far the scariest and most suspenseful book in the series. Also, Player 2 (Brad) wins, and Winston was awful.