Shivers 2: A Ghastly Shade of Green 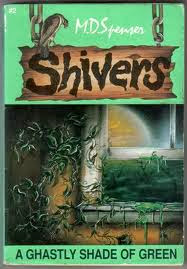 This book starts off with a terrible joke. And it's filled with them. They quite literally make me clutch my stomach in pain, because this is a children's horror book and M.D. Spenser needs to learn that dumb references to classic literature aren't funny. This author isn't funny. So are you ready? All right, here goes: “'I have a feeling we’re not in Kansas anymore,' I said nervously to Mom. She laughed. 'No, thank goodness!' she answered. 'We’ve been driving for two days to get away from Kansas.'" There. I did it. There are three more The Wizard of Oz jokes in this book. They all suck.

So our Jay Leno-type protagonist is a twelve year old boy named Jason, who can't stop thinking about girls even though he's twelve and needs to constantly remind the reader of it. Also he complains a lot. I'm sensing a pattern.

So Jason, his little brother, Timmy, and his mom, Mom, are driving from Kansas to Florida for a vacation in the Everglades, mostly because his mom is a botanist and wants to do some experimenting. Jason really wanted to go to Orlando, so he could travel to Disney World and the beach and see some cute girls in revealing outfits because he's twelve and in middle school and he likes girls and girls are important to him, but is disappointed that they have to go to some jungle in the middle of Florida. It's weird, because he kissed his lucky stone that he keeps with him everywhere, so he should have gone somewhere cool. I'm not making this up. He has a lucky stone.

His family gets to their cabin, where it's boiling hot and sticky, and his mom tells him about the Everglades because she's disappointed that he didn't learn about them in school, during sixth grade's "Introduction to swamps in the U.S." unit. Basically, it's a beautiful fresh-water marsh with lots of plants and animals and stuff, and he gets worried when she mentions alligators because "They eat kids like me!". Are you ready for the second terrible joke? Alright, here goes: "Alligators and buzzards and snakes! I thought. Oh, my!" There. I did it again. Having to type that line actually made me cry a little bit.

But worst of all, no cute girls in bikinis! What is he going to do! So they're stuck out there, in a cabin with no electricity or running water, and Jason feels that it is now his responsibility to look after Timmy and his beagle, Tannin, since his father is on a business trip. His mom tried continuously to get him interested in plants, but he ain't no geek. He loves astronomy, and wants to be an astronaut and go to Mars or something super cooltastic like that. Unfortunately, the fact that he loves astronomy and has a lucky stone that he likes to practice kissing actually makes him the geekiest character I've ever read about, contrary to popular* belief.

Fortunately, his complaints are cut short when his mom reveals her idea to make fertilizer out of sawgrass to get their family rich. Under the promise of wealth, he makes no more complaints about the Everglades. To his mom. Later, when wading through the swamp, his mom is attacked by an alligator! After worrying the reader for almost a page, it turns out it's just a log that happens to look exactly like an alligator. That was a much need tension reliever after dozens of pages of nothing.

That night, while Mom was reading poetry to her totally geeky rad, girl-loving, super funny, astronaut twelve-year-old son, they hear a pounding on the roof. When they go out to investigate, they find that whatever made the noise is gone, but Jason is scared now. His mom calms him down by first promising the Everglades will grow on him, then reminding him of all the girls he'll be able to meet with the money they earn. That suits him just fine, so he goes to sleep. Everything seems fine in the morning, until he notices a puddle of green slime on his dresser and his missing lucky stone. His scientist mom points out that maybe it was just a raccoon, so Jason points that she's a moron. His most prized possession is now gone, so he realizes that someone has it out for him. I just noticed another joke that Spenser tried to slide in there and failed miserably. "My lucky stone was gone, stolen by the creature from the green lagoon!"

I've never actively hoped a protagonist would die before, but there's a first time for everything. So the mom decides that she would put her scientist activities on hold and drive into town to pick up an airboat, leaving the others alone. After a little while, a dirty one-eyed man pokes his head in with the classic "Got any children I can eat?" line, scaring the pants off of Jason. He reveals that he lives in the swamp and is terrible at first impressions, but isn't a bad guy overall. His name is Snake-eye, and he had his right eye bitten out by an alligator, and he's fiercely protective of his swamp, threatening to attack any who wish it wrong with his hatchet. He then made the "not in Kansas anymore" joke for the second time in the book, and it's even less funny than the first time. I didn't think it was possible, but you did it, Snake-eye. You did it. So Jason sends the man away and notices that Tannin is missing. He leaves his little brother and sprints out into the middle of the jungle, where he finds that his dog was strangled with a palm frond. He freaks out and starts running around, and he eventually finds his way into a clearing, where Snake-eye saves him from a snake.

Snake-eye tells him that there's an Indian legend stating that the forest attacks those who try to do it wrong, but that it's probably just crazy talk. The pair get to Jason's cabin, where Snake-eye leaves to go fishing and Jason realizes that his brother is gone. He runs in a random direction and happens to find him being attacked by a bunch of plants. His first instinct is to save himself, that the 3-year-old has no chance and that he should run while he still can. But he reluctantly saves Timmy, and they get to the cabin while dodging moving bushes. Timmy says that the trees pulled him out there, so they decide to go get Snake-eye for help. They run to his clearing house, where they decide to wait for him. And then the trees and bushes start walking. Towards them. Walking. The trees are walking. So they run to the swamp, where they decide to swim back to the cabin.

The siblings are attacked by some alligators, where Jason goes all Bear Grylls on them and actually beats up crocodiles. With a stick. In water. If you hear a thumping, that's me banging my head against the wall. Seriously though, this book blows.

Jason and friend camp out in the cabin, trying to prevent their invasion as best he can, but the trees and plants are growing rapidly. During this battle, Jason is deciding whether to fight the plants coming in the window, or to run. The book says: "Should I fight back — or close the bedroom door and run? To flee or not to flee, that was the question!" You know that scene in The Terminator when Arnold Schwarzenegger rips that guy's heart out of his chest? Well, it felt exactly like that for me as I read that line. M.D. Spenser ripped my still-beating heart out of my chest and held it in front of me. My faith in humanity slowly drained just as my resolve to finish this book did.

Just when all hope seems lost, Snake-eye saves them. Woo-hoo. Then their mom comes, throwing mercury everywhere to kill the plants because of course she has mercury, she's a botanist. Wait...

So mom figures out that it was really her that caused the plants to go crazy by chopping up sawgrass. Good, I was scratching my head over that one all night. Right before the foursome heads out, the mom throws the dead sawgrass into the forest and yells that she swears she will never hurt the Everglades again. The plants' English is rough, but they must have been able to translate just enough to understand. The plants leave them alone, and there was much rejoicing. See that, that was a reference. So the family gets in the boat to go home, and the book ends with this final line: "She looked at me with a smile and winked. It took me a second but finally I got her little joke.
'Sure, Mom. It’s hard to forget this lesson when you’re from Kansas,' I answered with a laugh. 'We learned there’s no place like home! There’s no place like home! There’s no place like home!'”

I threw the book away and released a cry of anguish. This series is going to suck.

*For the sake of this sentence, popular consists of Jason and his mom.

Insight into the complex minds of the characters: (After the brothers just got back from a traumatizing experience involving plants strangling Timmy) "Timmy was crying and I noticed that his pants were wet. I quickly changed him into a dry pair of shorts, grabbed his hand, and together we marched off toward Snake-eye’s cabin. I didn’t even think about how gross Timmy's wet pants were". That is truly the very image of robust.

Beautiful Imagery: "Instead, they seemed to push me back, shoving harder and harder each time I tried to break through! It was like trying to shoulder my way down a school hallway filled with bullies!" Because Jason would know a lot about what that's like.

My hopes were high after I finished The Enchanted Attic, so this book was extremely disappointing to me. The horrible attempts at humor in a book that's supposed to be scary but ends up as a sad attempt to convey a message of wildlife preservation to the wrong audience was strenuous to say the least. The next book could go either way, but I pray that it won't be worse than A Ghastly Shade of Green.
Posted by jonwg88 at 11:05 PM