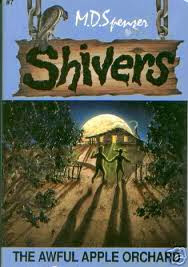 This book is a very hard one to review. I'll refer back to The Haunting House, where the characters and eventual survival theme redeemed the book, which it desperately needed when the ghost turned down the thermostat and opened windows. This book is pretty similar, but with the usual two-dimensional characters. But the ending, I will admit, actually surprised me so much my eyes widened, which I never expected would happen during a Shivers book.

Daniel is the stereotypical protagonist, annoyed by his sibling, yet noble when he/she is in trouble, going from a big city to the countryside, but this time on vacation (which is at least a little different, but still the same opening to A Ghastly Shade of Green... maybe M.D. Spencer finally realized that if you make trivial stuff exactly the same in every book, you know, stuff like the characters, setting, and plot, that people will actually start to notice). Daniel is twelve, and Sara, the artsy, easily-excited sister, is 11. The duo, along with their parents Mary and Bill, who have actually been given names, are traveling to New York to vacation and pick some apples at a nearby apple orchard. I don't want to spoil anything, but it's awful.

Bill reveals that the nearby orchard is haunted, which frightens Sara. Daniel reminisces on how he almost ruined the family's chances of vacation when he fell off his bike, injuring himself. He ended up begging the principal for 2 weeks of vacation time after the break had ended, but this presents a nice foreshadowing opportunity: "But if I had known what was going to happen at that old cider mill, I would have been glad to just stay at home and go to school. At least the school doesn’t have ghosts that try to kill people." Daniel's keen observation on the nature of school residents reminds me of my childhood, when a friend of mine made a habit of ruining the ending to episodes of shows created by Joss Whedon. I despised him for it, since I loved Joss Whedon, and decided to get him back. So, many years later, after the release of the newest season of Arrested Development, I texted him a list containing every twist in every episode in chronological order, but with no title, so he had gotten more than halfway through before realizing that I had just ruined his favorite show. The moral of the story is this: M.D. Spenser is terrible at using literary devices.

So the family is driving past the orchard when suddenly, an apple splatters against the window.  They look out, but there's nobody there. When it comes to ghosts, I think that M.D. has seen one too many Casper movies. The dad reveals that the orchard is haunted, and that the legend is that two children got caught in the cider-making machine. The next morning, after the family is settled in to their new vacation home, the parents send the children to the orchard for apples and cider. They take their bikes, and the orchard is all nice and merry and stuff. Daniel and Sara eat donuts, but when Daniel goes to get seconds, he finds that Sara is gone! He immediately comes to the conclusion that she got kidnapped, lost, killed, or- wait for it- drowned. In an orchard.

Our pessimistic protagonist finds Sara entering the gift shop. She shows Daniel the machine where the apples are ground up, and he gets scared and decides to run away. Realizing that he looked like an idiot, he decides that it would be a great time to leave. Sara wants just one more snack, so she grabs an apple from their bag. She bites into it, and she sees a worm that she nearly swallowed. She freaks out and drops the apple, and when Daniel looks back at it, there is no worm. Worst. Ghost. Ever.

Daniel explains the peculiar situation to Sara, how nobody must know or else they'll get sent to a looney-bin, a nuthouse, a cracker factory, una casa de loco, a mental hospital... and she gets the point. They ride back in companionable silence, and realize that their car is filled with apples when they get back. Obviously they don't realize that a car full of apples doesn't actually do anything to them, so they rack their small brains for solutions. Daniel finally decides to act like nothing happened and take care of it later.

The family eats dinner together, and the cider glasses filled with blood, which was admittedly more likely paranormal than a packaging error. Bill and Mary didn't see anything, so Daniel does a terrible job of not acting paranoid. I guess he's just a paranoid person. The siblings find that the car is now invisible, but that doesn't stop them from rounding up the invisible apples and tossing them off the property. Their dad catches them and indirectly calls them psychos, which is a softer approach than I would have taken, directly calling them idiots.

Just then, Mary decides that she needs a different kind of apple, so she needs them to go back. Daniel is disappointed that he couldn't spend time researching conspiracy theories, like whether or not the government caused 9/11, but he agrees. On the way down, an invisible fence appears and launches Sara off her bike, hurting her ankle and head. An invisible fence. What exactly kind of ghost uses something like that? Honestly, the maid ghost from last post would have done a better job.

For a moment Sara seems to have lost her memory, or suffered a concussion, or just had something bad happen to one of these characters, but nope, she's fine. Daniel says that they should try a different route, through the orchard, and at that point I had to realize that this character is pretty much the spitting image of a dumb-ass. Would it have been too easy or safe to go home? I feel like Daniel is totally forgetting that he has a house, like I forgot that I was reading this book even as I was reading it. This was so boring.

I'm only 70% through the book so far. I'll go fast. The siblings get to the barn, despite Sara's ankle, which Daniel didn't care about, or was maybe just too proud to admit that he was not smart enough to remember where the ankle was located. Daniel leaves Sara against the wall in the barn while he retrieves the new apples. When he gets back, Sara is rising towards the apple crusher, her shirt caught in the machinery.

Daniel saves her using his body weight, and the two escape. Sara reveals that she was pushed by a ghost. When they got home, they refused to eat apples due to safety reasons and Daniel's paranoia, and there are lots of family interactions. There is still a substantial amount left, so I'll try to finish fast.

So here is where things get weird. I'll give you my best interpretation of the ending. If I'm wrong, feel free to comment that. So: The siblings are talking in the middle of the night. Sara becomes convinced that it was all just a hallucination, their imaginations tricking them. Constantly. Even Daniel is not that dense, though, so he doubts her.

Sara's voice changes slightly in ways that Spencer doesn't know how to convey into words, since such words would require a vocabulary at at least a third grade level. She thinks that they should go back to the mill, just to prove that nothing spooky is happening. Daniel tries to refuse, but can't, because that would require words at at least a kindergarden level, and he's just not ready yet. The two sneak out and bike to the orchard, where no harm befalls them, and Sara seems not to be in the least bit out of breath.

When Daniel asks why she suddenly turned insane, she has deep, hollow eyes and a sad voice. She asks him if he understands, and he says he has no idea what she's talking about. She takes his hand, which feels cold and clammy, and leads him to the mill. She becomes more and more distant, she's not her anymore, and she keeps reassuring him as they walk. He starts to become disoriented, and the two open the barn door.

As Sara asked him to open it, her voice sounded more normal. When the lights inside the building flashed on and the protagonist steps back from shock, her face seemed completely normal, which was now almost more terrifying than her past state. Then, in excruciating detail, M.D. Spenser describes the sibling's dead bodies jammed inside the apple machine. They are ghosts now.

Sara said that she just didn't feel right in bed, and she knew somehow. I guess they died when Sara got caught in the machine the first time. Daniel is at first scared, then interested. Then they start laughing.

Then, in the Amazing and Best Twist Ending Yet:
They decide to close the door and shut off the lights, so as not to ruin the surprise. They will wait to see what happens when they are discovered, and then, when another pair of unintelligent children just like them come along, they will have some real fun.

Insight into the Complex Minds of Characters:
"“We’re going to sneak through the orchard, but we’re going fast. Sort of sneak-running,” I said." Genius. Pure genius.

Beautiful Imagery: Every single time it references the apple-grinding machine, it makes the sound "globbeta-glotch" just imagine that sound for a moment. Let it wash over you.

Hip References: None. There are no hip references. Not a'one.

Conclusion: This book was dreadfully boring. The ending, for a Shivers book, was spectacular, and I guess Daniel and Sara's minds snapped. Pretty creepy. But ask yourself: is one hour of merciless torture really worth five minutes of chewing gum afterwards? Trust me, it's a perfect metaphor. The ending made the ending to The Haunting House, The Locked Room, and pretty much all the rest combined lame in comparison, but it was just so terribly boring. The ghost didn't do anything until the whole apple machine incident, and that scene lasted all of one page. In the end, it's a serious case of in-betweenness.