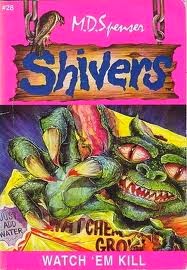 You know a book's going to be fantastic when it opens with "Why does everyone call me a geek?" Take a page from M.D. Spenser's book: hook in the audience from the very first page. And how about the next sentences, "Or an egghead? They use that word sometimes, too." Egghead? I think M.D. Spenser's getting twelve-year-olds confused with nobody.

Speaking of twelve-year-olds, our protagonist's name is Philip. He loves monsters, everything about monsters, and he's also an aspiring writer. In fact, Watch 'Em Kill, is his first book. I hope he has a backup plan, since his idea of foreshadowing is "[The events] were really terrifying, I can tell you!" Anyway, he's not very good at sports because he's kind of a loser, but he likes to tag along anyway even when it's clear he's not wanted. Gee, I wonder why people call him a geek. He reminds me of pretty much every male live-action children's movie protagonist ever.

So I bet you're thinking to yourself: "Why, Jonathan, he does seem pretty geeky, but he doesn't quite fit the bill as a full-fledged dork." Well, try this on for size: "Sometimes I even solve high school physics problems my teacher gives me. I like reading Shakespeare's plays, and I enjoy poetry and awesome books like Moby Dick and The Grapes of Wrath." I like these Shivers books because they're so relatable. Who doesn't remember their exciting middle school years of solving high school physics problems just for kicks. Also, a 12-year-old reading The Grapes of Wrath leads me to believe that maybe M.D. Spenser never actually read The Grapes of Wrath. Oh, and because I'm gonna forget, Philip's best friend is named Steven and there's a super athletic neighbor named Ronny. So... remember that.

Philip just loves those Watch 'Em Grow pills, where you put them in water and they turn into little spongy dinosaurs/animals/sea creatures monsters. So as our tale begins, little Philip is reading the witches' cauldron scene in Macbeth, which he describes as "really scary." OK, no, I'm sorry, this kid completely brings it all on himself, he is awful. As he is sitting there, he sees Ronnie and his brothers, Louie and Tubs, dribble past his house. This gives rise to one of the most painful scenes in the series as Philip follows them to their house and asks to play as the six kids already there, minus Ronnie, mock him. Ronnie's pretty polite about the rejection, and says that he can stay and watch them play if he wants. Now, in all seriousness, everything he did up to this point would have been excusable, but then he actually stays and watches them play for a few minutes before he started to feel kind of "out of place." At this point, the only thing I feel for this character is pity.

So, in a fit of depression, Philip rides his bike to the local... store, I guess, and buys four packets of Watch 'Em Sprout, a new product which is supposed to have monsters "even better than the Watch 'Em Grow ones." And just to top it off, "every monster you can think of was included: Frankenstein and Dracula, the Mummy, Wolfman, even the Creature from the Black Lagoon." Every monster you can think of, all five of them! And these are even better than the Watch 'Em Grow ones; what kind of monsters set the bar that low?  I can think of six more right now: Godzilla, Bigfoot, Cthulhu, that crazy dog from that one Steven King book, Charizard, Mothra. Also, Frankenstein's not even the monster, it's the scientist that made the monster, who is literally referred to as "Frankenstein's Monster." God, this book is lazy.

Unfortunately for Philip, he trips on his bike and spills a few of his pills. He rides away, thinking that it's no big deal until he hears some loud pops behind him, followed by red smoke. Knowing that it's not July 4th, Philip automatically assumes that someone is trying to murder him in broad daylight and runs away. His parents call the police, they go to investigate, and they find four huge sets of footprints. But even after all this happens, Philip's parents leave him alone that night to go to some party. They almost care about their son's safety less than I do.

During this alone time, the reader is exposed to more of Philip's hilarious antics, like when he mistakes his reflection in the window for a mummy. For someone who's so smart, he's a dumbass. After this charming scene, the power goes out, so Philip calls Steven and the two of them chat. Steven is babysitting his little sister while his parents are also gone. Is it just me, or are all the parents in this book atrocious? They all seemed to conveniently forget about the shooter in the woods with four huge sets of feet.

Then, somebody starts rattling Philip's doorknob, so he grabs a baseball bat, waits until it stops, and then goes outside (but because whynot?, right?). Philip finds a huge set of footprints, which doesn't actually make any sense considering it turns out to be Ronnie, Louie, and Tubs, but logic isn't exactly this book's strong suit. Philip finds Ronnie, who lost his brothers, and they team up to look for them. But first, Philip has an idea. The pair races up to his room, and he counts the remaining tablets, realizing that five are missing (four from the forest, one that I guess he knocked out the window at some point), and tells Ronnie that they must be alive, "It's the only logical explanation." It's the only what? Aliens would be more logical than that, a giant sharknado from the movie Sharknado would be more logical than that, because what kind of sense does it make that, I kid you not, "They've got some extra chemicals in them or something." I'm sold.

So, Ronnie gets a call from Louie saying that the Wolfman stole Tubs. I miss writing sentences like that. Ronnie decides to go home, so Philip goes upstairs and accidentally knocks another pellet out the window. Oh, and it has been raining the whole time. You can't see, but I'm slowly clapping right now. The mummy forms, breaking in and getting ready to kill Philip. My heart's beating, my hands are gripping the sides of the book, I'm thinking, "Is it finally going to end, will I finally be done with this terrible protagonist?" No, because Steven, with inhumanly impeccable timing, bursts in and hits the mummy with a baseball bat, which somehow knocks it out. Philip responds by saying, hand to God, "Now I know what a real friend is." Oh, so that's what a real friend is. I thought it was whoever convinces you not to see The Watch.

So Philip goes upstairs to change when he sees the remaining 72 boxed pills. He decides to bring them all with him, in one container, when he goes outside. He doesn't hide them, he brings them out in the rain. I'm just wondering how the hell he survived as long as he has, what with absolutely no survival instinct. I'm still baffled that he survives until the end of the book. When the duo gets outside, they see the Wolfman with a captured Tubs, who chases them for a while. But Philip trips, and the eighteen pills that were in his shirt pocket fall out into a puddle. Philip kept the remaining eighteen pills from the first box in his shirt pocket.

OK, I'm done, this is the new ending: Philip and Steven run away from the exploding pills, knowing that this may be their only chance of escape. The Wolfmen begin pursuit, slowly gaining on our slow-minded protagonists. All of a sudden, Steven has a epiphany and realizes how stupid his friend is, stopping to trip him before running back home. Philip is attacked by the Wolfmen, who throw him through a magic portal to an alternate dimension where he gets cooked alive by the "scary" witches in Shakespeare's Macbeth. Over in Washington D.C. Newt Gingrich and George W. Bush decide that the only course of action is to nuke whatever city in which this book takes place, so they take control of the nuclear bomb holding facility and launch them all, destroying the town and erasing all possibility of a sequel.

I really like it, I don't know about you guys. But, I guess I have to say what really happens. All the kids escape in the smoky chaos, the monsters rip open the box with the remaining 72 pellets, and nobody believes Philip the next day until Frankenstein's monster attacks some family. Then, Philip's family gets attacked by the mummy, and this time it's Philip's dad that acts like a doltish clod. Their conversation goes a little something like this:
"Dad, come on, let's escape."
"No, son. I'll hold them off, you get out of here."
"No, he's really slow, we could easily escape if you just stop fighti-"
"Don't try to be the hero, son, just go!"
"What? No, I'm not-"
"Quickly, before he overwhelms me, carry on the Henderson family line, make sure there are more deplorable idiots in the world, just like you and me, son... just like you and me."

Philip runs to Steven's house, where he meets up with Steven, Tubs, Louie, and Ronny. All of a sudden, Philip has an idea: maybe fire would destroy the monsters, since it melted the original Watch 'Em Grow pellets. Maybe it wouldn't, maybe this book would maintain at least a little bit of credibility and fire wouldn't be the living monsters' weakness, but... it works.

This is when the decent writing turns awful. From this point on, a lot of stuff happens with no detail and little description. Philip and Steven leave the others who basically say, "Um, you guys go out and fight, we'll hold the fort and stuff." They get picked up by their parents, who drive them to the main battle between humans and crappy monsters, and they burn them all. Turns out a "crazy scientist" mixed a bunch of nonexistent and unnamed chemicals into the pellets because whynot? and accidentally released them to the public. Philip was crowned a hero, blah blah blah this book sucks ass.

Insight into the Complex Minds of Characters:
"'I'll wallop him so hard with this sledgehammer that I'll knock him into next week!'"

Beautiful Imagery:
"So I chuckled and chortled. I giggled and guffawed."

Hip References:
"'I vant to dreenk yer blood!' the foul creature said." Really? One line, one line, and it's screwed up.