Shivers 14: The Curse in the Jungle 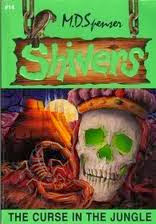 Well, the holidays were nice, but it looks like we're back to our regular program. Unfortunately, this book sucks just as much as the regular program. Wait, no it doesn't. Well... I can't put my finger on it, but this book does have some strange redeeming value. Looking back, everything just screams bad, but I wasn't that bored while reading it. It was still pretty subpar, though.

This is the conversation I imagined happened between M.D. Spenser and Paradise Press:
M.D. Spenser: I have a new, super cool idea for a book! You know how many of my previous books have installed moral values in the reader, such as being good to the environment and not smoking, while educating children on the ecosystem in that one terrible book I wrote.
Paradise Press: Yeah, I guess.
Spenser: Well, this one is going to be even better, just read it.
Paradise: Wait, what is this educating kids on?
Spenser: The beautiful Tikal!
Paradise: But... but why?
Spenser: I went to my local library recently and borrowed a book about the animals in South America, and they're super neat-o!
Paradise: But... but some of this isn't even right. Also, you don't educate on anything, you just introduce a bunch of animals with a brief visual description.
Spenser: I know! Neat-o, right!
Paradise: No, it's not neat-o. It's super neat-o!

I have to say, though, this is better than A Ghastly Shade of Green, but when the bar is laying on the floor then it's not that hard to raise. There isn't just one place to say "because whynot?" because it perfectly describes this book's very existence. The character has no personality, because there is almost no dialogue and the only thoughts we get are little snippets like "Wow!" and "I'm a goner," and "Great! Bat poop!" There are only two other characters that speak, the parents, and they also have no personality.

Anyway, it starts as Harry, our athletic and blank-slate protagonist, is wandering around in the jungles of Tikal. Instead of pointing out the wondrous indigenous life there, he is complaining. Despite that, it looked like a pretty good book, even considering the sentence comparing the air to a giant washcloth. And then this line happened:

"Harry was one unhappy camper."

It hurt, like being strangled by a giant washcloth. This book is 90% walks in the forest, talking about the Mayans and animals that nobody knows or cares about. First, Harry spots a mosquito. Then, a toucan. Golly, it's like this takes place in the Discovery Channel! Oh, and then there's a wild panther. Never mind, it's just a howler monkey. Just wait, this book makes less sense as it goes along. Next, Harry finds a magnificent unspecified snake in his house. Harry screams, because if there's one thing this character loves to do, it's scream at everything. Just wait until the disturbing backstory.

So at dinner, Harry's dad talks about an alleged curse brought about by messing with a Mayan king's property. That's scary, because one could find a Mayan king anywhere! At night, a hoard of bugs suicide bomb Harry's window. If you think that's idiotic, watch this: after pointing out more miscellaneous animals that nobody knows about for a reason, he gets attacked by "peccaries," wild pig-type creatures. Then, he escapes, and joins a tour group to climb a Mayan temple. Nothing bad happens. But then, Harry gets the idea to go excavating. Because if there's one thing twelve-year-olds love it's... no, not taking skateboarding videos and overusing idiotic slang terms, but excavating!

So, the next day, Harry decides to excavate at a previously excavated temple called El Mundo Perdido, or "The Lost World." The archeologists didn't find anything, but of course Harry does after three hours of digging. A Mayan king. These guys are really common. Of course, Harry takes his skull. After fending off a vicious rat that was leaning on his leg, Harry leaves the temple and shows the skull to his parents. They praise him for doing such a great job being incredibly lucky.

Guess what happens. That's right, bad luck. First his dad falls off some stairs and into a coma. Then, in the least accurate part of the entire book, which is so lazily done it could be written by Dan Brown, Harry gets stung by a scorpion. His mom fixes this by rubbing alcohol on the wound. I own a scorpion. I have owned a pet scorpion for quite a while now. Scorpions don't work this way. Scorpions have never worked this way. They inject venom, not infect a tiny wound. Rubbing alcohol does nothing. I think the best part is, though, that the main character pieces the events together for the reader after being stung and seeing the scorpion. There's no need, for as long as you have the intelligence of a below-average five-year-old, you're smarter than Harry.

Harry gets stuck in quicksand, Harry's mom is bitten by a snake, Harry points out some more strange animals, Harry faints. Then an archeologist, Nevins, wakes Harry up with smelling salts. Which he carries around with him. Perhaps to ward off the ugnogaflogashnarg, distant relative to the pig and toucan. Or perhaps he just faints a lot. M.D. Spenser doesn't elaborate. Nevins, a grown man, asks Harry to stay at his place, but Harry has bad memories of walking in on a friend's mom in the bathroom. He screamed. This was his tragic backstory. So, he stays at his own house.

Harry decides that enough is enough and tries to bring the skull back, but is stopped by bandits. He kicks one in the shin and runs. Once the skull is safe, Harry's parents recover. In the most pointless part of the book, a coatimundi shows up. It's like a raccoon, but completely unrelatable if you don't live in the jungles of Tikal. The next day, his parents return, so he goes back to the Mayan king to steal a necklace. No bad luck shows up, so Harry figures it would be O.K. to climb a big temple. He's fine. But then, he gets hungry, and eats some random nuts he finds on the ground. He gets really sick, but it's not bad luck, it's just being moronic. What kind of dumb-ass eats nuts off the ground of a rainforest in South America? HOW DID YOU EVEN SURVIVE THIS LONG?

Harry is taken to the hospital, where he is sedated and sent home. Harry says that he doesn't know what the necklace means, but it's probably nothing. If anything kills off Harry, it won't be bad luck. It will be his total and complete lack of any sort of survival instinct or common sense whatsoever.

Insight into the Complex Minds of Characters:
"'Wow!' Harry thought to himself, 'I'd like to find the bones of a Mayan ruler, or at least his jewels.'"
and
(after Harry kicked one of the bandits in the shin) "He looked up and saw them getting nearer. They were yelling at him!" Nooooooooooooooo.
oh, and how about
"Archaeology is the science of learning about people who lived centuries ago by digging up their bones and dishes and stuff."

Beautiful Imagery:
"Where the summer rains are so fierce they can soak a person's clothing in five seconds." That fierce.

Hip References:
"Nevins reached in his hip pocket and pulled out a cellular telephone." Like, the kind you used to see people walking around with in a briefcase?

Conclusions:
While too jumpy and random to be considered boring because it goes from one meaningless activity to the next, this book is a disappointing successor to The Spider Kingdom, and that's saying a lot.
Posted by jonwg88 at 7:30 PM