Shivers 26: One Foot in the Grave 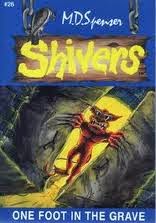 I'm not sure where they found the cover for this book. It has absolutely nothing to do with the book itself. There is no demon with sunglasses. There's not even a demon. Or sunglasses. It's a ghost. But the worst part, by far, is the cliffhanger chapter endings. They are in the end of every chapter, and are by far the best reflection of M.D. Spenser's inability to use literary devices. So, I will bolden them.

So Bubbie and her brother Patrick are moving with their parents to France for their father's job. Bubbie is extremely obnoxious, and Patrick doesn't talk even though he's two years old. Right as Bubbie enters her new room, a hard, grimy hand clamps down over her mouth. Oh, but it's just a boy her age... in her room. Well, seeing as how she's living in France now, she should probably get used to it. He says that his family used to live there and that he had to grab something, then runs off.

That night, Bubbie is unable to sleep. She decides to explore... her room. First, she finds a half-eaten peach in the corner, then she finds what the boy was looking for hidden under a box. It was "the face of pure evil." Oh, wait, it was just a crystal ball with an image of someone hanging from a tree. I'm tired of this book already. So Bubbie decides to go to sleep, hoping against all odds that she'll wake up in a different book, but she's just not that lucky. The next morning, the boy from before comes back to "walk her to school." Oh, and his name's Jean-Luc, by the way. On the way there, he tells Bubbie that his grandfather said that the crystal ball could make them very rich, because it belonged to a gypsy or something.

So, the two skip school to establish a home base for their spelunking adventures. Jean-Luc leads Bubbie up a mountain, and then badmouths Americans when Bubbie said that she was planning to eat at the school cafeteria. In a village school. It's actually pretty amusing, just because of Bubbie's reactions.
"'You all just live in Disney World, you know, compared to the rest of the world.'
'No, I don't know,' Bubbie said with irritation. 'I didn't live anywhere near Disney World, I'll have you know.'"

Well, what can one expect from a book whose back cover description ends with "PARLEZ-VOUS HORROR???" which literally translates to "DO YOU SPEAK HORROR???" Anyway, the pair makes it up the mountain and get attacked by a wild boar. Bubbie almost gets gored, but I'm not that lucky. Nobody's that lucky. Jean-Luc, however, does get hit, and it makes a big gash in his leg. He manages to make it to Bubbie, who makes unhelpful remarks, such as when Jean-Luc said he was going to throw a rock at the boar, Bubbie says, "that's cruelty to animals. I wouldn't let you do it." I just thank the good lord every day that I'm not a supporting character in a Shivers book. I mean, I'm totally against animal cruelty and all, but if I get rammed by a boar in the wild, I'm gonna smite the bastard.

Well, the two decide to call it a day and head back to the village. At home, Bubbie gets a call from Jean-Luc, who tells her that they're continuing their adventure on the morrow, after school. On the morrow, after school, they walk back up to the World War 2 bunker in which Jean-Luc wants to set up camp. The two push open the door, but then Bubbie "fell endlessly into a bottomless black pit." Oh, but it's just a small pit that she ends up climbing out of. Also, she fainted when she fell in. It's not like she hit her head or anything, she just fainted. You know what has more likable characters than this? State prisons. Insane asylums. Meetings for mass puppy murderers. It's just... I don't know, I can't stand Bubbie.

So the pair find a treasure trove of old WW2 relics. They grab some, and Bubbie gets a grenade and some earrings. But on the way out, they see a ravenous dog. "And right then, Bubbie knew that this dog was going to rip them both into tiny blood-soaked pieces." It didn't. They escaped unharmed. But on the way out, Bubbie was told that she was going to die by a gypsy, so at least something good happened.

Afterwards, the pair shows their haul to Jean-Luc's grandpa, but Bubbie keeps the grenade secret. Upon seeing the earrings, Grandpa became all sad because he gave them to a beautiful gypsy when he was younger. On her way home, Bubbie is attacked by a terrifying ghost gypsy who throws the crystal ball from earlier at her and then disappears. Coincidence? In the crystal ball is an image of Patrick, her little brother, lying dead on the railroad tracks. So, what does Bubbie do? She runs right to the railroad tracks and saves him, right?

Nope. She runs over to Jean-Luc's house and basically says, "Hey, Patrick's in trouble, so can you run ahead and save him, because I'm almost late for being a blatant ass somewhere else." Jean-Luc does save Patrick, nearly getting run over in the process. When Bubbie gets back home with her brother, her parents ground her for a month because she was out late with her little brother and had absolutely no explanation. Things go from good to better when a giant rat leaps at her face and tries to murder her in her room. But then, Bubbie's dad comes in, and it... breaks the spell? I don't know, it just vanishes into thin air, just like my Shivers expectations after this book.

Joking aside, I am being a bit too hard on this book. It's really not that bad, but I'll talk more about it in the conclusion. Just don't take my insults too seriously.

Returning to the story, Bubbie returns from school to receive a call from Jean-Luc saying that his grandpa died. It literally says, "'It's Grandfather,' Jean-Luc said. He started to cry. 'He's been killed!'" And then: "Bubbie couldn't believe her ears! Jean-Luc's grandfather killed! It couldn't be true!
It wasn't.
'Well, almost killed,' Jean-Luc said."
Now I remember why I was so angry at the book. This was why I threw it against the wall, had pleasant dreams of burning it last night. It's because that part, right there, is undeniably, indubitably, quite obviously god-awful. I don't know how M.D. Spenser allowed that, because no matter the book, I know I can always expect two good things from him: perfect grammar, and drawing the line between suspense/hyperbole and blatant lies that are disproved on the next page. This book destroyed that for me more than once. I may never love again.

So, Bubbie goes over to the hospital to check on his grandpa with him. It turns out he accidentally shot himself in the leg with an unloaded gun. Ghostly. In the hospital, he tells the kids the story of the gypsy: Once, there was a beautiful woman whom many men, including himself, loved. But she loved a German dude who was occupying at the time, so... not smart. Seeing as how no Nazi terms translate to good English puns, I'll continue. Basically, her boyfriend left, and the villagers sealed her up in the bunker and she died. It was Hitlorrible (I had to try).

Anyway, her name was Elena, and Bubbie was thinking about her when she decided to see that gypsy from before, the one who told her she was gonna die. Well, she says it again. The only way Elena was gonna leave her alone was if everybody in Namelessville died. Or if she manages to suffocate Elena like when she died the first time. The gypsy probably could have mentioned that first. On her way home, Bubbie meets up with Jean-Luc, who tells her that he has to move so he can live with his parents. So, Bubbie's all alone.

Bubbie goes home and faces more gypsy tricks. First, there's a small fire on her lawn that doesn't go out. Then, there's a skull on her dresser. Then, another rat. Finally, she left her room and sees her brother speak for the first time, telling her to go to the bunker for a final battle. His first words were to get his sister killed. Respect. Well, she does go to face the gypsy, and she says that she's just starting with Bubbie, she's aiming to murder the whole village. After a fierce battle, Bubbie blows up both ghost-Elena and the entrance to the bunker, sealing in the ghost.

But the "Twist" is:
The family is moving to Germany, where they will live next to a real haunted castle. I think the saddest thing about this ending is that it's one of the best in the series.

Insight into the Complex Minds of Characters:
When Bubbie touches a half-eaten peach: "It was soft, mushy, and ice-cold. She snatched her hand away and felt her skin crawl. She imagined babies' severed heads and decomposed organs." Well.

Beautiful Imagery:
"She became aware of the most poisonous odor she had ever smelled."

Hip References:
"What is this, Bubbie wondered. The Spanish Inquisition?"

Conclusion:
The storyline is good. There is lots of conflict. It's an actual horror book. It should be great, but there are so many flaws. It's just... the cliffhangers are awful, the characters are awful, but it's so significant that it ruins the book for me. I don't quite know how to elaborate it, but this definitely ended M.D. Spenser's good streak.
Posted by jonwg88 at 10:51 PM