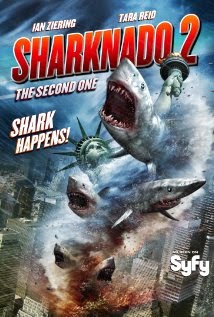 I just watched this beauty last night weekend. I know it's odd that I'm reviewing the second one before the first, but I haven't seen the first one in months and I decided I better review this while it's fresh in my head. But be warned:

*There will be massive spoilers for both movies. I mean, it's Sharknado, so nobody really cares, but still, use caution. This movie relies heavily on references to the first movie, so I probably will too. So that's happening. By the way, please excuse the bad quality of the clips; I had to use Quicktime.

I should probably start off this review by saying I'm a little biased. I love movies from The Asylum, and have been watching them for years. If you don't know who they are, I'll give a little background. The Asylum film studio was created by a few Village Roadshow executives, and started off making low-budget horror movies. I haven't seen much of their early stuff, but that's OK because they changed their business model pretty quickly. They discovered that the quickest and easiest way to sell movies was to– and this is all 100% true– make really low-budget rip-offs of popular movies and then release them a couple days before the original movie is released. These shameless products have been dubbed "mockbusters," and... well, you can probably guess their quality. Some examples are the famous The Asylum studios originals Transmorphers, Snakes on a Train, and Allan Quatermain and the Temple of Skulls. This shouldn't be allowed. However, Wikipedia does say that they've never lost money on a film, so I guess it works.

I've seen some of these mockbusters, but I prefer their more original movies. Sometimes, they'll quit throwing stones at larger companies long enough to make a movie uninspired by others, and they're almost always entertaining. I love all of the Dinoshark movies, the random other sci-fi titles they made (Asteroid vs. Earth, Attack of the Killer Lampreys, etc.), and, of course, Sharknado. That being said, I can't deny a certain poor quality fundamentally found in nearly every one of their movies. You'll always see cheesy and often bad writing, terrible special effects, and commonly, bad acting. A true fan must look past these traits or even embrace them, which is why they have so little fans. But enough of the boring backstory. Will Sharknado 2: The Second One escape The Asylum's horrible curse?

No, it won't. Of course not. Their unexpected success with Sharknado meant a much higher-budget movie than anything else they'd created, but it was still produced by The Asylum. The film begins as our old heroes, Fin (Ian Ziering) and April (Tara Reid), are riding a plane to New York. Of course it takes place in New York. There's this big The Twilight Zone homage during which Finn looks out onto the wing and sees a shark. It isn't long before he realizes that his old demon had returned, right before the sharknado begins to tear chunks off the plane. Also, I should mention that the April character wrote a book called "How to Survive a Sharknado," which is really meta-self-referential. So the sharks kill the pilots as well as celebrity guest Kelly Osbourne (one of many), and actually bite off April's hand, which was holding a gun. Remember the hand thing, that's important. Fin singlehandedly lands the plane, because he has mastery of every badass skill imaginable. So April goes to a hospital, and Fin is stuck having to get his sister's family to safety while singlehandedly, simultaneously destroying yet another batch of sharknadoes. To be honest, there's quite a bit of boredom throughout most of the movie; the action is short and predictable, and you can tell exactly who's going to die far before they do. But more about that later.

They make a "jump the shark" joke. Of course they do. Some writer should be fired for that, or at least tarred and feathered. You want to talk about jumping the shark, what about cutting a living woman out of a shark from the inside with a goddam chainsaw, how's that for over the top? Jesus Christ, the bar for comically insane action is so high in those movies, what could they possibly have done?

Shit. Well... huh. They did a pretty good job pushing the limits, I'll give them that. I don't know if you noticed, but Fin just jumped across sharks. That's not even the craziest thing that happens, too. Fin eventually decides to electrocute the tornados to dispel them (I don't know), and that's when the real craziness starts. But first...

Matt Lauer and Al Roker team up to deliver news on the sharknadoes in several semi-comedic scenes throughout the movie, as does Stephanie Abrams and Kelly and Michael. My problem is that much of the appeal of the first movie came from the fact that it took itself so seriously– it was just another fun Asylum B-movie, probably not expected to get much recognition at all. But since the movie became popular, Sharkado 2 has become a sort of mockery of itself, which would be fine, except it's definitely not a comedy movie. Those little segments where news reporters talk about the sharknado in a joking fashion or when characters suggest making a movie about the sharknado attacks take the watcher out of the movie. I think that, and the fact that the second movie is just less exciting, is what makes the first Sharknado better. Because what makes Asylum movies magical is when you accept the awfulness enough to become engaged in the film, and the Sharknado movies are shining examples. It's fun to watch if you just want to laugh at it, but if you allow yourself to care about the often 2-D characters played by occasionally bad actors, you will undoubtedly enjoy it. I watched this movie with a few friends– no way I'm watching Sharknado 2 alone– and the reason they didn't enjoy it nearly as much as I is because they preferred to point out Ian Ziering's flaws than follow the exploits of tortured celebrity badass Fin Shepard. Now don't get me wrong, I laugh at the outrageous moments just as much as the next guy, but in order to enjoy the rest, you have to take everything a little less seriously. But enough with the sentimental shit. On to the insanity.

Fin finally busts out the chainsaw, as is tradition, and shit hits the fan. Just to give a little preview... (warning– this is pretty gory.)

And then the citizens of New York team up to kill flying sharks. This scene until the end of the movie includes every great quality from the first installment, and is definitely the best part of the film. And when Fin finds April's hand with gun in a shark's mouth and uses it to shoot other fish out of the sky, I had to leave the room from shock and awe at the sheer stupidity, and I loved it. Sharknado 2 may not have been as good as the first, but it was still fun to watch and, fortunately, it suffered from many of Sharknado's original flaws. I don't know how this movie fares when looked at from a real critic's perspective, but looking at it through my Asylum-specs, I'd say it's delightful.
Posted by jonwg88 at 2:17 AM